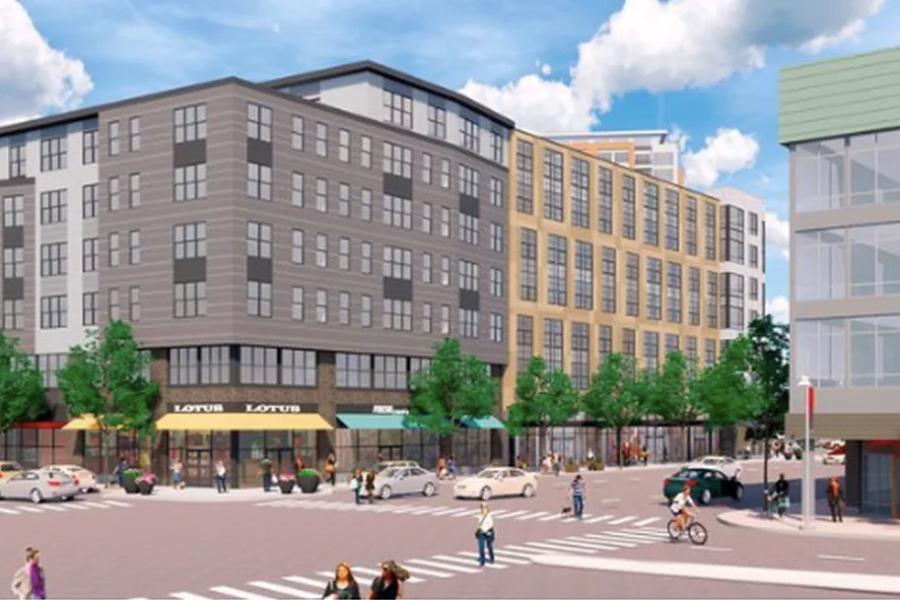 The first phase of construction on the Washington Village project in South Boston has officially gotten under way, according to Samuel & Associates, a Boston real estate development company.

The project is part of a long-awaited redevelopment of a former industrial site, encompassing 5 acres, into a mix of uses that will bring together the Andrew Square community.

This initial phase of the enterprise — which is being developed in a joint venture with Boston's Core Investments Inc., and Brighton's Intercontinental Real Estate Corp. — will include the construction of a mixed-use building with 214 rental homes, including 37 income-based units, and 20,000-sq.-ft. of ground floor retail and restaurant space at the intersection of Old Colony Avenue and Dorchester Street.

Washington Village's centerpiece will be a public park created to provide a neighborhood amenity that immediately establishes the site within the Andrew Square community, Boston Real Estate Times reported. The streetscape built in Phase 1 will feature upgraded sidewalks, crosswalks, landscaped areas and new streets — all to promote walking and biking as healthy and safe transportation options.

"We're excited to get shovels in the ground and make this transformative project a reality," said Peter Sougarides, the principal at Samuels & Associates. "Beyond the much-needed new housing at various price points, the plan creates new streets and new public open spaces that will be the beginning of the transformation of this former industrial area.

"The project team would not have reached this important milestone without the invaluable feedback and support of the Andrew Square community, and we look forward to working with our neighbors as additional phases of Washington Village progress."

David Pogorelc, the founder and CEO of Core Investments, added, "Washington Village has as an outstanding place in the history of the neighborhood, and I am delighted to celebrate the realization of this reimagined project. This first phase of Washington Village is a key step in renewing Dorchester Avenue in South Boston for the 21st century."

Just a short walk from the Massachusetts Bay Transportation Authority's (MBTA) Andrew Station, Washington Village's first phase of development is part of an approximately one million-sq-ft. master plan that will introduce retail, residential and commercial uses, as well as space open to the community and anticipated to be utilized year-round.

Peter Palandjian, chairman and CEO of Intercontinental, noted that his company is "honored and thrilled" to be involved in a project that will help reinvigorate the South Boston neighborhood.

"With union jobs and a thoughtfully designed multi-use complex, this project represents the potential that exists in Andrew Square," he explained. "We are excited to help realize that potential."

The Real Estate Times noted that the new development also is designed to reduce the surrounding neighborhood's dependence on vehicular travel in accordance with the mission and vision of the Dorchester Avenue Corridor Plan. The building itself has been designed to consider the Boston's greenhouse gas reduction goals and will be certified LEED Gold.

"The corner of Dorchester Street and Old Colony Avenue is being transformed into a vibrant section of Andrew Square," said Linda Zablocki, president of Andrew Square Civic Association. "Washington Village will bring all good things for those who wait. And boy, have we waited."

Her comments were echoed by Pattie McCormick, vice president of the neighborhood association, when she said, "We feel like the 2004 Red Sox, on the verge of something special. Core Investments assembled the team and Samuels is bringing home the trophy! This will be a momentous project for the future of South Boston, and we are excited to see it get off the ground."