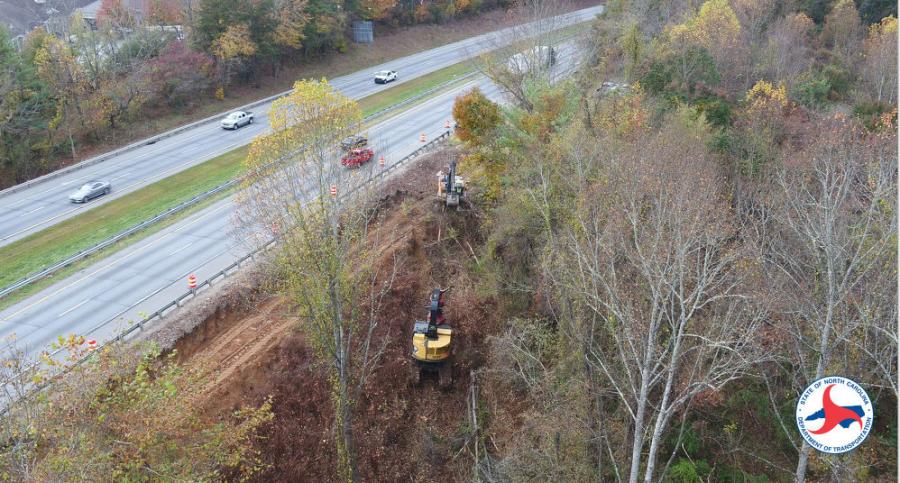 Earthmoving and clearing work conducted along I-26 eastbound in Buncombe County contribute toward the more than 1 million cu. yds. of excavating undertaken for this project.

After years of planning, environmental studies and even lawsuits, the North Carolina Department of Transportation is relieved to see the start of a widening project on Interstate 26 between Hendersonville and Asheville. "The project has been on the books 15 years, and people have been begging for it even longer," said NCDOT Communications Officer David Uchiyama.

That's because the volume of traffic is up. "There's increased capacity," explained Nathan Moneyham, NCDOT Division 13 assistant construction engineer, who's overseeing the Buncombe County project. "Western North Carolina is a popular spot." This 18-mi. section is used daily by locals, is a commercial route to the Port of Charleston and sees visitor traffic from Ohio Valley residents on their way to the beach.

"This corridor is regionally important for the eastern part of the U.S.," stated Mike Patton, NCDOT engineer for Division 14. He describes the heavily traveled corridor as the "route to get to southern beaches." Anyone traveling to the seaside from Tennessee, Ohio or elsewhere in the Midwest is "coming through here." That also applies to the 375,000 residents in Buncombe and Henderson counties.

To accommodate traffic increases, the ambitious and highly anticipated project will widen 16.9 mi. of I-26 from U.S. 64 in Hendersonville to Brevard Road in Asheville. Expanding most of that distance from four to eight lanes will contribute to safer and more efficient travel, while increasing capacity to handle existing volume and accommodate future growth. 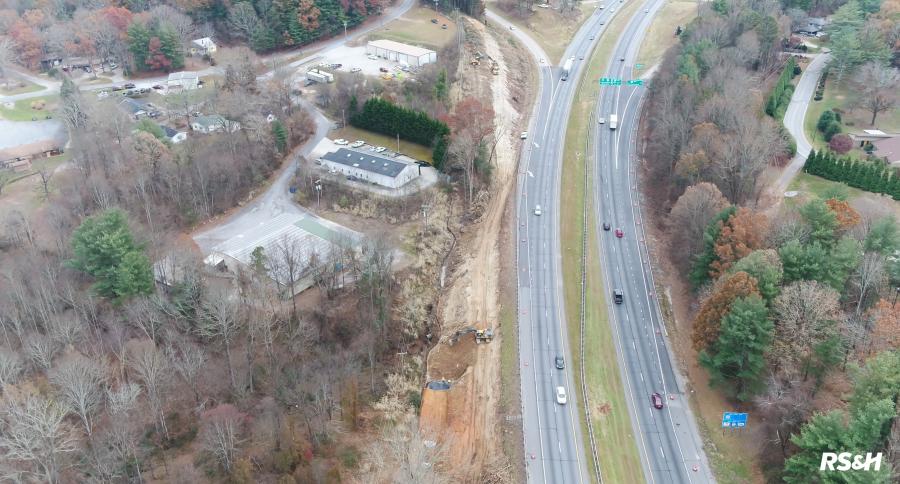 According to NCDOT, some sections currently operate at "levels of congestion characterized by unstable travel speeds." If projections of continued increases in traffic volume are accurate, it will lead to additional sections operating at similar levels of congestion. Predictions are that by 2040, I-26 could be operating over capacity if nothing is done.

In addition to reducing congestion, this project will improve the pavement structure and address deteriorating road surfaces. NCDOT reports that the existing roadway surface has undergone major rehabilitation twice, the last time in 2011.

The widening is part of a group of projects, Moneyham explained, that continues the widening of the highway and improvements made to an interchange at Brevard Road in Hendersonville. This section of the project is divided into two contracts at the Buncombe-Henderson county line.

Part of the first project begins at the county line and stretches 7.49 mi. This entire section will be widened from four to eight lanes.

Under general contractor Fluor-United, a joint venture, approximately 200 people in multiple crews work a predominantly Monday-Friday schedule, although at times work will continue 24 hours a day due to lane closure restrictions and the tight timeline, Uchiyama indicated.

Facing mountainous conditions that require some big cuts even though it's not a new location, Moneyham said workers have to determine whether to dig or chip the rocky soil. "We'll do some blasting, but not major rock cuts," he predicted.

What they do cut will be reused. According to Uchiyama, NCDOT estimates that 500,000 yds. of waste will be reclaimed. Other materials needed for the project include stone for a drainage layer and about 500,000 sq. yds. of concrete pavement. It's such a big amount, they anticipate setting up a batch plant on site.

There was limited purchase of land. "We had most of the Right of Way," Moneyham stated. However, the project did impact 24 parcels in Buncombe County, plus 63 parcels and 58 property owners in Henderson County. Walls will help crews adhere to historical boundaries — the roadway runs past the Biltmore House property — and reduce the environmental impact.

The second project is under the direction of general contractor Archer-Western Wright, a joint venture between Archer Western and Wright Brothers, who oversee an average of 75 to 125 people working on site daily and another 30 behind the scenes.

There will be blasting, and sound walls erected in residential areas. There will also be tree removal, although Patton said they're leaving as many trees as possible, which is why they're not clearing to the ROW. In addition, there will be "at least four acres of reforestation."

This contract includes a vertical construction component. In addition to the 10 bridge structures that will be demolished and rebuilt, two rest areas built in the 1950s (having already been rehabbed once) also will be razed and replaced while larger parking areas will be added. "We'll rebuild the welcome center from scratch," Patton confirmed.

To complete the work, typical earthwork equipment such as concrete pavers and excavators will be on site, but some unique equipment will be needed for certain aspects of the job.

The Blueridge Parkway Bridge spans the interstate. Because the old bridge is not wide enough, a new structure will be built beside the existing bridge out of pre-cast, segmental sections requiring "massive cranes" to place them. Work on that will begin in a year and will require traffic to shift during placement. "It's a big piece of the project," Moneyham said.

In Henderson, the cranes will be used on three bridges along the interstate and one that spans the river. Because it's a joint venture, Patton said the partners "don't want to argue about wear," so they paid $5 million to Caterpillar to ensure that every piece of equipment on the project is brand new.

It's a considerable investment, but the price tags on these projects are high: the Henderson County section is $271,226,964.96 precisely, and the Buncombe County section is approximately $253,010,000, for a total on the two contracts of more than $534 million.

Financing is separate for the two projects, but both are funded in part by GRVE bonds, a federal aid grant program, with some federal and some state money. Both contracts include incentives for early completion and penalties for finishing late. For example, the Buncombe contract includes an additional $2 million if completed by Nov. 2023, six months ahead of the anticipated completion date. According to Moneyham, there are multiple additional incentives and penalties for various portions of the work.

Similarly, Patton says his crew stands to earn a one-time bonus for on-time completion, in addition to incentives for "a lot of intermediate completion times — or penalties for not meeting them." It's a tall order. For instance, after closing Butler Bridge Road, an underpass bridge, crews have just 180 days to build the new structure. 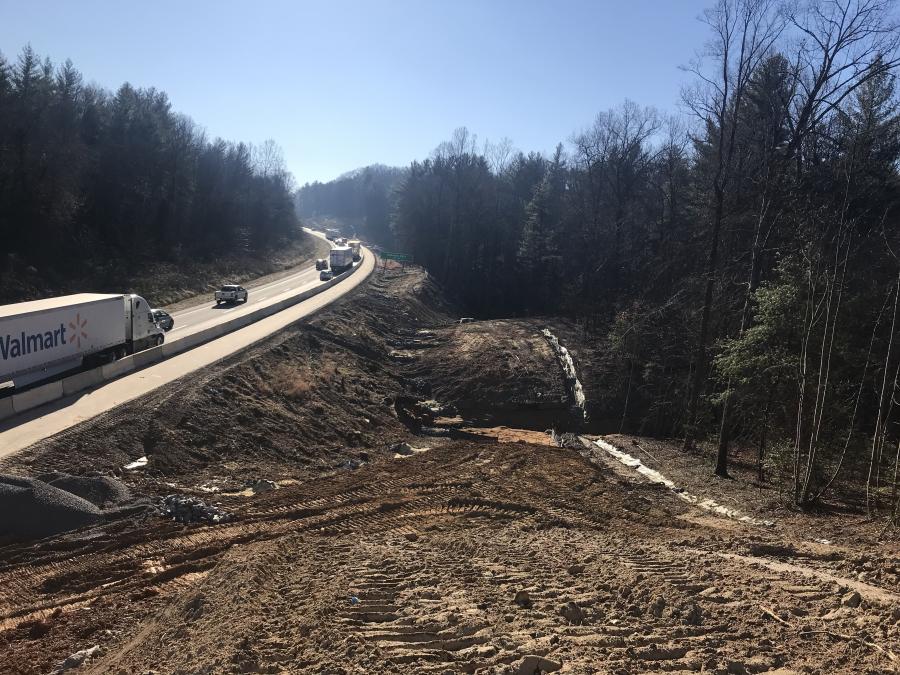 In order to collect those bonuses and avoid penalties, both crews must finish by April 2024. The Division 13 project is three months ahead, due to their design process being completed sooner and the contract being let to bid first, but the completion dates for both projects are the same. "Division 13 is technically complex," Patton elaborated when explaining why it will take longer. "Division 14 is longer, but only part of it will be eight lanes, so there's less work. Some will be only six lanes because traffic decreases as it leaves Asheville."

To keep schedules on track, Moneyham said snow removal was included in their contract, with drivers on call. However, Patton's contract has no weather contingency. "There's no Plan B. The only way to get an extension is to lose 40 percent of the contract time."

Using some of the same subcontractors not only expedites the schedule, it also facilitates communication. Coordination is not difficult, according to NCDOT, in part because the contractors have worked together before. "The biggest problem is where the projects meet," Patton said. "We're still negotiating who will do the concrete and we're still working on phasing and traffic control."

Public outreach is achieved through webpages, a specific Twitter account, media days, news releases and a special river users meeting. NCDOT provided river safety procedures, such as a safe passage lane for paddlers and other river users, incorporating floating navigational aids, red lights on the causeways and installation of a catchment device on structures to prevent construction materials from falling into the water.

Patton said the towing contracts are working well. "Clearance times are half what they used to be," he stated, adding that the contracts include a heavy tow unit for semis. "I've never seen it before, but it keeps traffic flowing."

Maintaining traffic during construction has been a challenge the crews have met with nighttime lane closures that narrow lanes to 11 ft. with safety barriers, known as "Jersey barriers." Inside lanes in Buncombe will rely on the existing median and guard rails instead of safety barriers, but all four lanes are open.

Another challenge involves the environmental compensations to be made for endangered species, such as Northern bats and Elk Toe mussels along the river. To accommodate the animals, crews have reduced construction lighting in sensitive areas and are allowed to clear only at certain times of the year.

The new Parkway bridge will be built beside the existing bridge, which will stay open until the new span is finished. The new segmented bridge will match the look of typical construction along the parkway, with a combination of concrete and stonework. It will feature a 5-ft.-wide sidewalk on one side to accommodate the Mountains-to-Sea Trail and a new parking area on the north side.

Crews will begin building the new structure from the bottom, placing pre-constructed bridge segments across the interstate, placing the deck and preparing it for traffic. Traffic will move to the new bridge, after which crews will remove the old bridge in stages. The scenic roadway will experience minimal impact, with no closures anticipated. Work is scheduled to start in the fall of 2020.

In Henderson County, the first phase of the widening project will comprise eight new bridges, including five overpasses and three bridges at grade. The current set of parallel two-lane bridges over the French Broad River will be replaced by one eight-lane structure. Construction activities that require work to be done from the top of the bridge, such as setting girders, are expected to occur at night. A safe passage lane for river users will be provided during this process. Construction of the bridge is expected to take three to four years and is one of the first major elements the contractor is working.

NCDOT intends to begin the Connector project in a couple of years to widen I-26 from I-40 north to the Broadway Street interchange. Designed to separate local traffic from interstate traffic in Asheville, the Connector work is estimated to cost $950 million and includes revamping the I-26/I-40/I-240 interchange near the WNC Farmers Market, adding two lanes to I-240 in West Asheville and building a new bridge to carry I-26 and I-240 traffic over the French Broad River north of Bowen Bridge.

Beyond that to the north side of the Broadway Street interchanges, NCDOT is in the planning stages of widening I-26 from Broadway up to U.S. 25/70 near Weaverville.

NCDOT planned for future growth, based on 2040 traffic projections, which is why the two current contracts widen I-26 to eight lanes instead of just six. "We would be back in 10 years if we were only building six lanes," Patton surmised.

There's a long way to go. Crews have just begun clearing and erosion control, Patton reported, adding that he fully expects to complete on schedule and collect the bonus. CEG