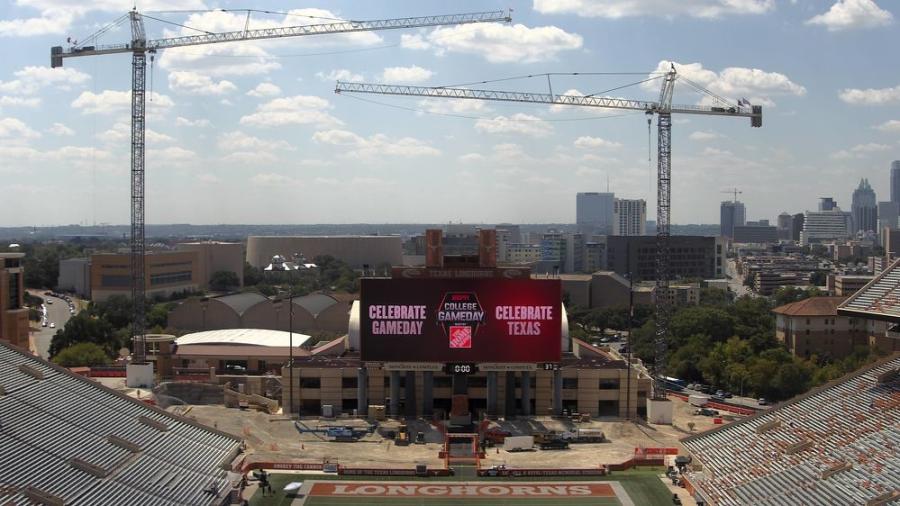 “When the project is finished, everyone will be very pleased with it,” said Jim Shackelford, director of UT’s Capital Planning and Construction. “It will be a definite improvement to the south end zone of the stadium, and it will in essence complete the master plan that was envisioned more than 12 years ago for the stadium as a whole.”

The University of Texas, Austin has kicked off a $175M renovation and expansion project for the south end-zone portion of the Darrell K. Royal Texas Memorial Stadium where the Longhorns play.

The project to upgrade the south end will take until the 2021 season to complete.

Major changes will be made at the south end and crews will fully enclose the 95-year-old football stadium. To enclose the stadium, crews will carry over the architecture of the north and east sides to cover the south end. They will build new entry towers and fill in the corners with concessions-equipped terraces.

One of the project's crown jewels lies inside the seating bowl. A Longhorn-shaped balcony designed into the end zone seating will be visible from the air and is the first time a logo will be carved into a seating bowl. It will offer a unique new home for football coaches' offices. 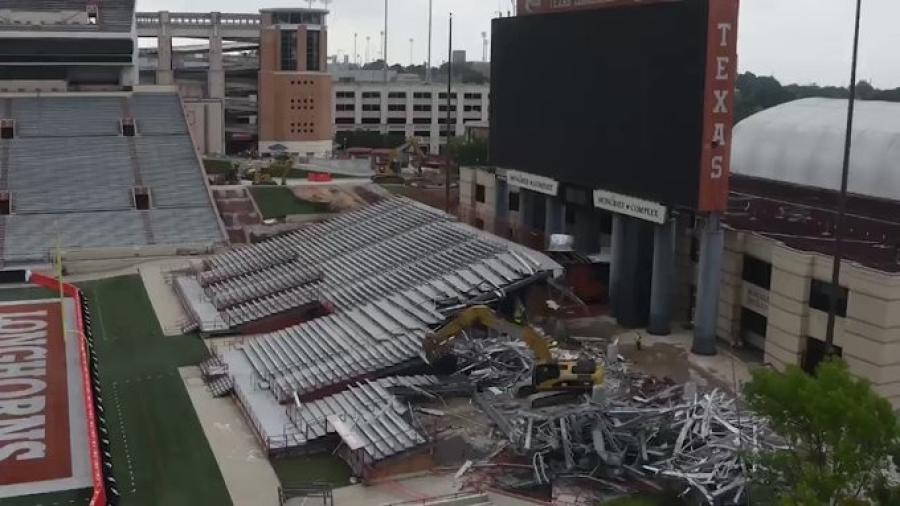 The horseshoe-shaped stadium will be transformed into a full bowl, though seating capacity will not increase. High-priced loge boxes will be added and occupied by wealthy alumni and boosters.

The new stadium club will be lined in wood paneling and adorned with burnt-orange regalia.

While the fan experience is considered critical, school officials said much of the focus of the project is on the players.

"It's ultimately for our players," Texas Head Football Coach Tom Herman said. "When you come to The University of Texas, you deserve to train in the finest facilities in the country. We're close right now with the renovations that we did when we first got here with our locker room and weight room, and this new project will certainly put us in the upper echelon of training facilities nationwide. At the same time, it will really enhance our game day atmosphere for our fans."

Additions to the south end zone include a new video screen, renovations to the student seating area, a student terrace and concession stand, and a glass-walled building housing multiple tiers of suites.

Hensel Phelps builds a variety of projects under the headings of aviation, commercial, education, government and justice, healthcare, hospitality, infrastructure and transportation and science and technology.

Hensel Phelps has been busy primarily with demolition work at the stadium, but will soon construct the new features. Heavy equipment on hand at the construction site includes cranes, backhoes, drills and delivery trucks.

University of Texas, Austin expanded the north end zone in 2008. Last summer, the Longhorns locker room received a $100,000 upgrade. It was on coach Herman's to-do list when he took his coaching job.

Now the south end of the stadium is the focus of improvements.

"When the project is finished, everyone will be very pleased with it," said Jim Shackelford, director of UT's Capital Planning and Construction. "It will be a definite improvement to the south end zone of the stadium, and it will in essence complete the master plan that was envisioned more than 12 years ago for the stadium as a whole."

Shackelford said that initial construction is under way that includes demolition of seating at the south end. He said major construction has yet to begin.

In early May, the Texas Longhorns officially broke ground on the south end zone expansion at Darrell K Royal-Texas Memorial Stadium, a project with a scheduled completion date set for late summer 2021, just in time for the 2021 season.

Construction crews have now demolished the permanent bleachers that debuted for the 2009 season and held 4,525 fans. Those bleachers pushed the stadium capacity past 100,000.

The remainder of the cost will be provided through additional pledges, ticket sales and other means.

Athletics was responsible for $125 million of the upgrade cost. UT regents kicked in the final $50 million.

Meanwhile University of Texas has hired Oak View Group to build and maintain a $338-million basketball arena that will be adjacent to UT's track and soccer stadium. Basketball capacity will be about 10,000.

"We live in a competitive world among all the universities, and Texas strives for the best in that," said University of Texas president Gregory L. Fenves in a printed report. "We enjoy performing in this competitive environment."

It's an addition to the stadium that UT's coaches, players and fans hope will be a lasting legacy to the Longhorns.

"This is about the University of Texas and continually investing in our people, programs and student athletes," said Fenves.

UT officials said no taxpayer money or tuition money will be used for this stadium expansion.

The existing stadium scoreboard will stay up for the current football season.

According to reports, the scoreboard will remain in place during the current 2019 season, but come down in 2020 as the Phase 2 structure takes shape. The first phase will build the framework for the stadium's new south bowl.

"The modern game day experience is about quality, not quantity," said Sherri Privitera, Populous principal-in-charge for the expansion. "Fans want unique experiences in an authentic place. This is a game-changing project."