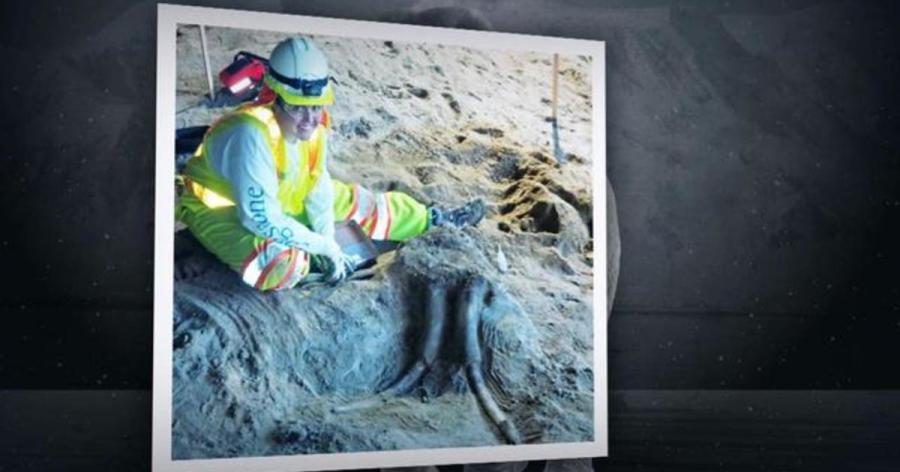 A three-foot section of tusk that's at least 11,000 years old, and a nearly complete skull were found at the site.(Photo Credit: CBS News)

A subway construction project in Los Angeles is unearthing the prehistoric side of Southern California.

Workers excavating the tunnels discovered fossils of ancient mammals that roamed the area about 11,000 years ago. The historic trove includes bones from extinct beasts, like mammoths and mastodons.

CBS News correspondent Carter Evans went underneath Los Angeles to see how building the city's future is shedding new light on the past.

Underneath one of the busiest parts of the city, one of the largest subway projects in the country is underway. It was here that workers digging the new line literally made a mammoth discovery.

Paleontologist Dr. Ashley Leger oversees a team who works alongside construction crews that are searching for fossils. Their discoveries began with bones of Colombian mammoths who roamed the area in herds during the Ice Age.

A three-foot section of tusk that's at least 11,000 years old, and a nearly complete skull were found at the site.

"It's a dream come true for a paleontologist," Leger said. "This is the bucket list you always want to find at some point in your career. And then it's one of the first things we found here."

"This is probably the best gig in the town for a paleontologist," said Dave Sotero, who works for Los Angeles' Metro, which hired the experts who dig up the past. "It's not every day you have a subway project going through a rich fossil area. So it's tremendously exciting for everybody on the project."

Over the next few weeks, the tunnel will close in on an ancient area known as the La Brea Tar Pits, which is located about a mile away. Leger expects the fossil finds will increase dramatically in that area.

Just a couple inches of tar became a sticky death trap for the massive mammals that roamed the area tens of thousand of years ago.

"I think of what's under all of that," Leger said. "Under everyone's feet is this rich history that everybody misses. So we get to open up people's eyes, open up people's imagination and bring the past to life."

Prehistoric black ooze still seeps from the ground around the museum, which contains the world's largest collection of Ice Age fossils.

"Here at the museum, all of these things come to life," Leger said. "They stand up in front of you. They kind of speak to, you know, that curiosity that we're all born with."

Almost every bone ever found near the Tar Pits is kept at the museum. They're cataloged for further research, which helps Leger identify one of her newest finds.

Back in the tunnel, more clues about the ancient past keep turning up -- a leg bone from an extinct camel and a tooth from a mastodon.

"We've got mammoths and mastodons on one end," Leger said. "We're finding horses over here. It's been really fun."

Leger says the best is yet to come. In the next few weeks, she hopes to add more predators like the saber-toothed cat to her finds.