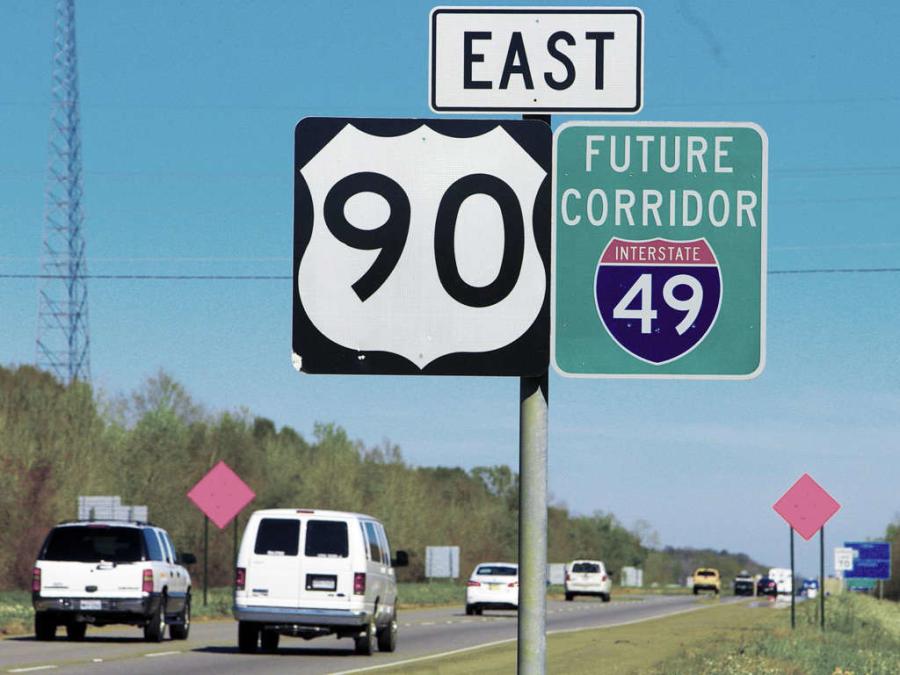 Louisiana’s plan is to connect New Orleans and Lafayette with an upgraded U.S. Highway 90 that becomes I-49 South, essentially converting U. S. 90 to a high speed, limited access interstate roadway.

Louisiana will be the beneficiary of $216 million in federal stimulus aid for the state's transportation needs, including $50 million for preliminary work on Interstate 49 in Lafayette, according to an announcement April 19 from Gov. John Bel Edwards.

The monies are part of the $1.4 trillion stimulus package approved by the U.S. Congress in December, including $10 billion for transportation construction and improvements nationwide. The aid is aimed at helping states that suffered revenue losses due to the pandemic.

Louisiana's portion of the assistance also features $20 million to aid local transportation planning agencies in Baton Rouge, New Orleans, Lafayette and Shreveport, with another $29 million earmarked for the construction of a new bridge on I-10 in Lake Charles.

"As you are all aware, the state's roads and bridges are in great need of repair and upgrade," Edwards said in a statement that accompanied his announcement. "Addressing these needs has been a priority of my administration.

"We have proven what we can do when we have funds and have invested over $3 billion in infrastructure since 2016 despite a 1980s revenue stream as the main source of funding."

The federal allocation for Louisiana includes $35 million to ensure that the state has enough money to qualify for all the federal matching funds for which it is eligible, Edwards explained, an issue that comes up periodically amid the state's $14 billion backlog of road and bridge needs.

Because of the coronavirus, there had been less cars and trucks on the road until recently, meaning that those states with gas taxes, including the Bayou State, collected a much smaller portion of their key source of transportation funding. Traffic plunged dramatically across Louisiana, especially in the early months of the pandemic, as many people worked from home rather than in their offices.

"We will certainly use these funds to replace funds that were lost as a result of the coronavirus and apply them to some of the most needed projects in all regions of Louisiana," said Shawn Wilson, secretary of the state Department of Transportation and Development (DOTD), The Advocate reported.

According to the Baton Rouge news outlet, Wilson added, "Unlike previous federal bills, these funds can be used for operating costs," including the replacement of heavy equipment in district transportation offices.

Highway to Be Converted to Interstate

The Advocate noted, however, that it is still not clear exactly how the I-49 funds will be used.

Louisiana's plan is to connect New Orleans and Lafayette with an upgraded U.S. Highway 90 that becomes I-49 South, essentially converting U. S. 90 to a high speed, limited access interstate roadway.

When finished, I-49 South would begin in the West Bank of New Orleans, then travel past the bayou communities of St. Charles, Lafourche and Terrebonne parishes, through Morgan City, and connect with I-49 in Lafayette.

Proponents of the plan have said that the upgraded highway would connect ports in New Orleans and elsewhere with industries in the Midwest and oil industry suppliers and manufacturers between New Orleans and Houston.

However, a price-tag of up to $5 billion has been a longtime obstacle to making I-49 South a reality, The Advocate reported.