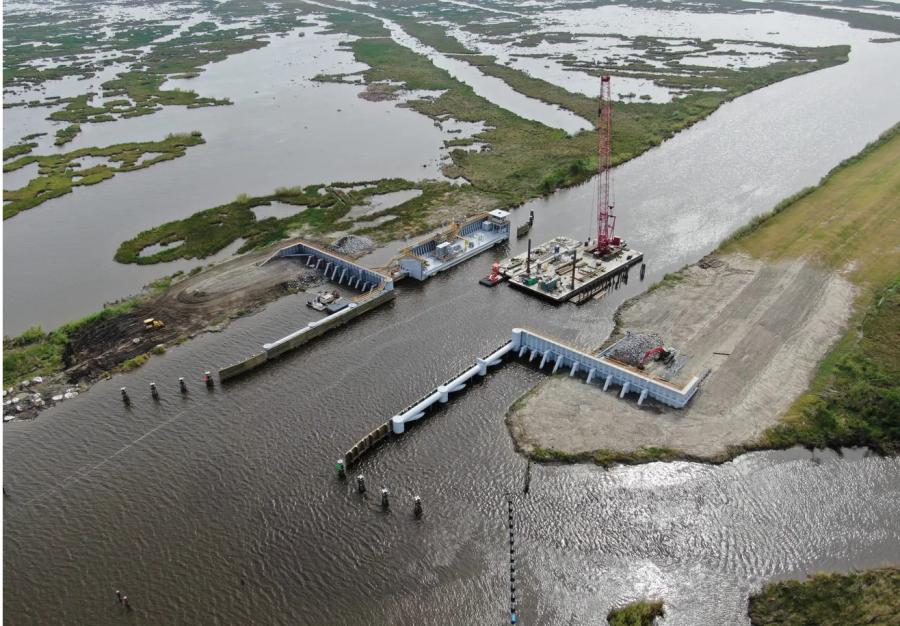 A levee system that protects about 200,000 residents in Louisiana's Terrebonne and Lafourche parishes from Gulf of Mexico storms reached a milestone in mid-January with an agreement that kicks off federal-led construction on the project.

State and local officials executed the agreement with the federal government on the Morganza-to-the-Gulf hurricane-protection system in late December. All parties gathered Jan. 18 to make it official, the Houma Courier reported.

"This day has been many years in the making and we are thankful to all those before us who worked to make it possible," Col. Stephen Murphy of the U.S. Army Corps of Engineers' (USACE) New Orleans District said in a news release. "Signing this project partnership agreement is an important step toward furthering one of our nation's most important risk-reduction systems."

One of the USACE's first projects will be building the Humble Canal Floodgate near Montegut, the federal agency announced. It will use the first $12.5 million in federal money for Morganza, approved in January 2021, for that work.

It is the latest in a series of major actions on Morganza over the past year, the Houma news source noted.

In November, U.S. Rep. Garret Graves (R-Baton Rouge) said he and other Louisiana lawmakers included $500 million for the project in a measure attached to a Congressional spending bill approved last September that averted a federal government shutdown.

During a speech in Houma, he noted that a formal announcement on that money was forthcoming.

"Today's Project Partnership Agreement was 30 years in the making — a milestone that's significance cannot be overstated," said Chip Kline, chairperson of the Louisiana Coastal Protection and Restoration Authority, on Jan. 18.

"This agreement opens the doors for major federal investment for this vital hurricane-protection system, which has been entirely financed through state and local funds until now. We're grateful to be taking this crucial next step alongside the federal government in providing the people of this region with the protection they deserve."

Morganza Plan in Limbo for 30 Years

The Courier reported that local and state officials have lobbied for federal money since planning for the Morganza-to-the-Gulf hurricane-protection system began in 1992.

Louisiana officials helped break the logjam last January in winning so-called "new start" designation from the federal Office of Management and Budget. The long-awaited action cleared the way for the federal government to spend money on the system's construction.

Since then, Louisiana lawmakers have steered $31.5 million to the USACE for construction work on Morganza.

But the $500 million now on its way is by far the largest federal allocation, nearly matching the approximately $600 million in state and local tax money spent to build the levee system so far.

Louisiana officials have said that federal funds and help from the USACE are essential to completing the work. It will involve raising most of the system's 12-ft. levees to approximately 20 ft. and building two massive floodgates in the Gulf Intracoastal Waterway — one in Houma and another in Larose.

Frustrated with delays at the federal level, the Terrebonne Levee Board forged ahead with an interim Morganza system in 2007 in hopes the USACE would eventually get the money, now estimated at $3.2 billion, to upgrade it for protection against a 100-year storm, defined as the kind of hurricane that has a one percent chance of occurring during any given year.

As it stands, local officials have said there are no guarantees the interim system will hold against a direct hit from any hurricane, though it has already prevented flooding from several, including Ida last summer.

Parish presidents Gordy Dove of Terrebonne and Archie Chaisson of Lafourche, along with Terrebonne Levee Director Reggie Dupre, told the Houma Courier that they welcome the USACE's involvement with construction.

"The taxpayers of Terrebonne Parish, with assistance from the state of Louisiana, have shouldered the burden of paying for this crucial hurricane protection and flood-risk-reduction system," noted Dove. "This Project Partnership Agreement now ensures the eventual completion of Morganza."

Graves and fellow Congressman Steve Scalise (R-Metairie), whose districts both include Terrebonne and Lafourche, also praised the agreement.

"While this may just look like a few signatures on a page, the bottom line is that today represents a new era on the Morganza-to-the-Gulf hurricane-protection project, and safer communities in Terrebonne and Lafourche parishes," Graves said. "After decades with the federal government largely on the sidelines, today's action brings the Corps of Engineers and [its] checkbook to the table. We've broken the federal logjam on this project, brought federal funds to the table, and will have more great news in the very near future."