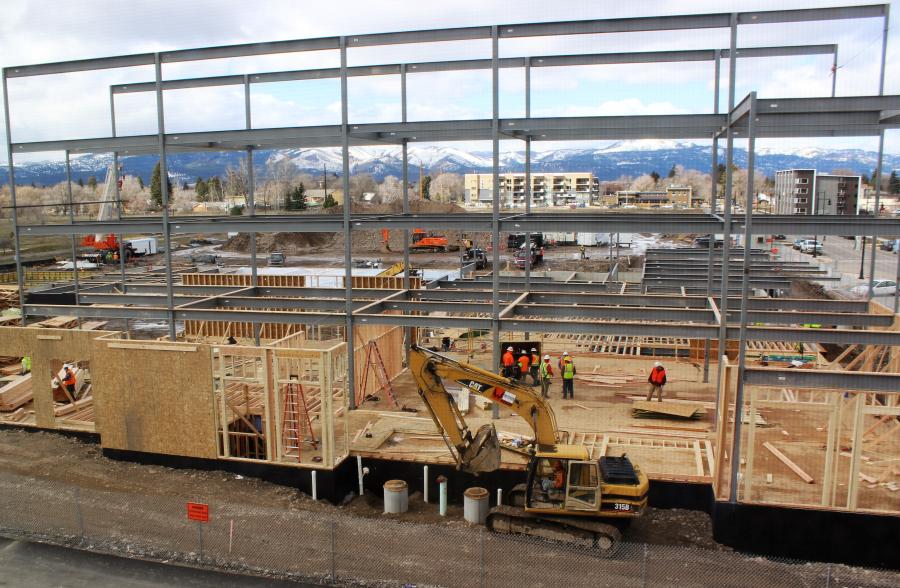 Old Sawmill District of Missoula, Mont., is being converted into a $125 million residential, retail and commercial development that will feature four condominium buildings under the name Polleys Square, and a mixed-use building offering high-end apartments for rent called Cambium Place.

Future development in the 46-acre district is expected to bring total construction costs to $250 million at build-out.

Additional projects include a 55-unit student housing development called UGlobal, a 150-unit 55-plus active living and learning community and retail and office construction.

A parking garage is being discussed adjacent to Ogren Park Allegiance Field. In addition, the developer is in negotiations with restaurant and brewery operators.

The name, Old Sawmill District, draws on a lumber mill that once operated there. Its founder, Edgar Polleys, opened Polleys Lumber Company in 1910 and ran it through 1955 when it was sold.

Two of the Polley Square condominium buildings have been completed. Crews finished Polleys Square building A in August of 2016 and B in January of this year.

Along with condos, building A has two commercial spaces.

Polleys Square Units C and D are currently under construction and are scheduled to open in 2018. There will be a total of 73 condos when all four buildings are completed.

Cambium Place, a mixed-use building with a neighborhood market, fitness center, office space, underground parking and 65 apartments is currently under construction. It will stand just west of the Polleys Square condominium cluster south of Wyoming Street. Completion is slated for June 2018.

“Cambium Place is a separate project from Polleys Square, but is being built by the same developers,” said Linnea Stanhope, a spokeswoman of Old Sawmill District.

Much of the design work is based on the old sawmill concept.

“We have tried to keep the sawmill district look and feel incorporated into the neighborhood,” Stanhope said. “You can see the use of the black iron features and industrial look of Polleys Square. The sinker logs and corrugated metal from the mill site were used to construct the pavilion and picnic shelter in Silver Park.”

Old Sawmill District runs along the Clark Fork River. The property long known as the “mill site” has sat vacant since the early 1990s — unused and unsightly, but considered rich with potential.

As Old Sawmill District it will be a lively urban neighborhood where people live, work, shop and play. Along the river, Missoula will gain a 14-acre city park that extends the beautiful Clark Fork trail system.

Interviewed in Missoula Current, Ed Wetherbee, founder and developer of Old Sawmill District, said that while the demand for high-end apartments exists in Missoula, the market is short on supply. He added that although the high-end rental concept exists in other parts of the country, it is still new to Missoula.

Demand for condominiums also is said to exceed supply.

“Yes, demand is there and justified by the number of sales we have already seen in Polleys Square,” Stanhope said. “People love our location and close proximity to the hub of the Missoula trail system and short distance from downtown and the University of Montana.”

After nearly 100 years as a lumber mill, the 46-acre site was cleaned up and made ready for an urban, multi-use, residential and commercial neighborhood.

Cleaning up the district was made possible through the Voluntary Cleanup Plan, or VCP. The plan, developed in coordination with the Montana Department of Environmental Quality, called for the removal and disposal of the site's contaminated soils.

“Work under that plan has been completed and the mill site is ready for its long-awaited renewal,” Stanhope said.

Old concrete foundations were dug out and crushed, then used to fill excavated log ponds along with other fill material from the site. Abandoned buildings were deconstructed and materials used to build shelters in Silver Park.

“The project is causing surrounding property values to increase,” Stanhope said. “This site had been abandoned for about 25 years. Homeless camps had sprung up in the old abandoned buildings. With the new development, this has once again become a safe, vibrant area in the center of Missoula.”

Also traffic calming devices were integrated into the plans. The development has opened up a new east-west arterial in the city of Missoula that has helped take pressure off of other major roads.

No roads were closed because of the project.

Old Mill District will be the first urban mixed-use development in Montana. “The residential and commercial building are all class A projects with a level of building styles and finishes not seen in the multi-family housing industry in Montana on this scale,” Stanhope said.

She added that the 700 residential units and 150,000 sq. ft. of commercial space will provide a boost to the local economy.—CEG