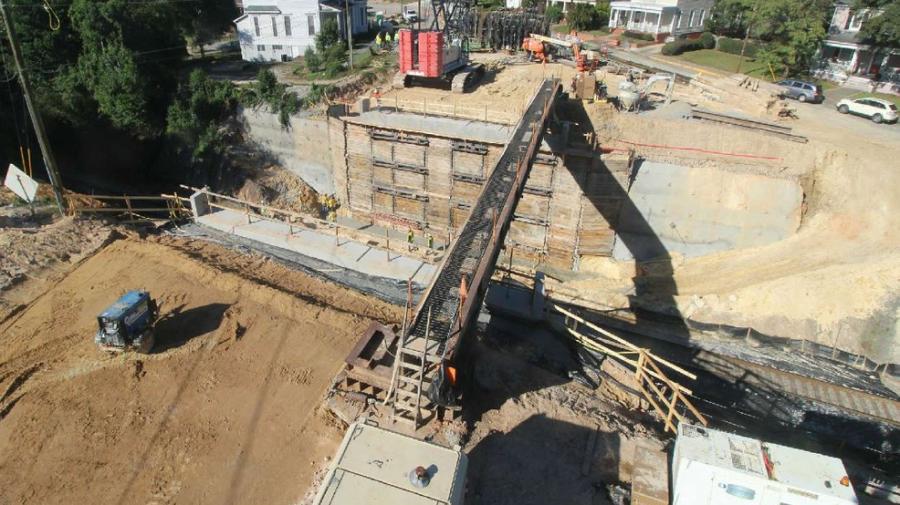 The Georgia Department of Transportation (GDOT) announced in early October that contractors would begin the next phase of construction to replace the bridge over the Norfolk Southern Railroad track in Macon.

GDOT reported that daily work is happening from 5 p.m. to 3 a.m. and detours for both motorists and pedestrians are in place.

"This work will not involve the drilling machines," said GDOT project manager Richard O'Hara, "so the noise impacts will be reduced compared to previous night work. We will still take precautions to minimize the noise caused by the equipment engines and power tools."

GDOT said the complete replacement of the bridge is vital for both the safety of motorists and pedestrians and for Norfolk Southern Railroad's freight-rail transportation network to allow for double-stacked freight cars.

In addition to the College Street bridge replacement, the transportation department also is working on a partial replacement of the span that carries Georgia SR 247/Pio Nono Avenue over the railroad, just to the west of the first project in Macon.

Together, the two Bibb County building jobs are projected to cost almost $19 million.

The design-build team for the two bridge replacements is made up of Wright Brothers Construction Co., from Charleston, Tenn.; and Neel-Schaffer Inc., based in Jackson, Miss., with an office in Atlanta.

In other Macon/Bibb County news, the Associated Press reported in early October that middle Georgia's most populous county could pay $8.75 million for a new landfill and enough dirt to close an old one.

County commissioners are considering spending $5.7 million for a site and $3.05 million for dirt to bury construction and demolition debris in its current landfill. This type of landfill waste is subject to fewer requirements than locations where household garbage is buried, because such debris is less likely to contain hazardous chemicals.

A new site would allow the county to meet a regulatory deadline to close its current construction and demolition landfill.

County spokesman Chris Floore said that if the state doesn't grant a permit, the county would get its money back for the land.

The 171-acre property is valued at less than $93,000 for tax purposes, but Macon Mayor Robert Reichert said the property is worth much more because the Environmental Protection Division of the Georgia Department of Natural Resources has cleared a study to determine its suitability for a landfill.

Reichert said the $3 million would be a down payment, but also cover the cost for dirt needed to close the current landfill. The county needs dirt 18 in. deep to cover 120 acres.