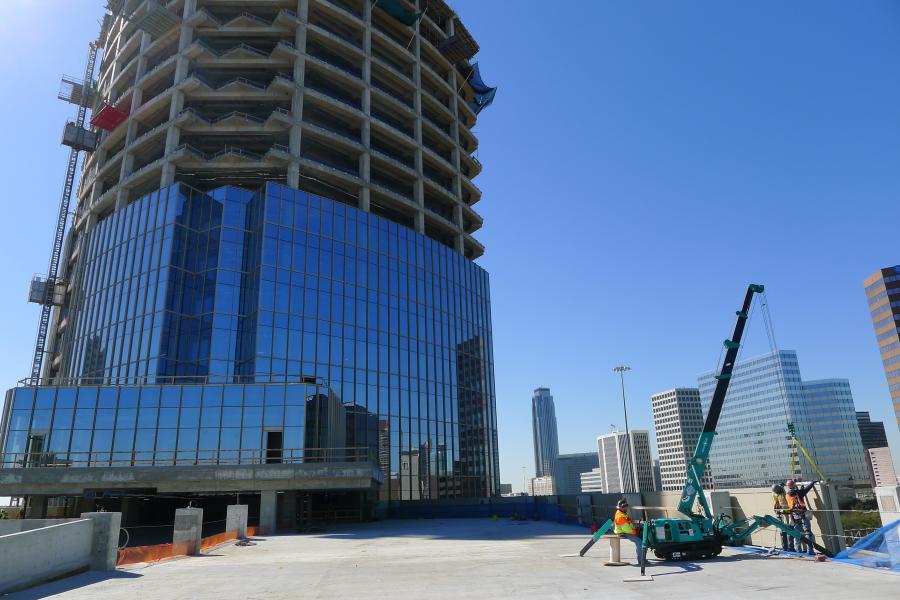 A Maeda MC285 was utilized by a glass and curtain wall company to hoist and install unitized glass curtain wall panels on the exterior of AMEGY Bank's new Houston headquarters. The contractor was able to use conventional equipment to install unitized curtain glass panels in most areas of the 25 story building and parking garage structure, however, panels on the facade of the parking garage structure were larger and heavier than could be handled safely with their smaller capacity equipment. Also the installation area could not be reached by the existing tower crane on site.

The installers were able to speed up the installation of the panels using the MC285. The contractor was using conventional equipment, which would hoist one panel from a floor or two below and then set them into place, move the equipment, then set another panel. This process was time consuming and cumbersome. With the MC285 set up in one position, up to six panels could be set in sequence without a machine move.

When the next section of panels was installed, repositioning the MC285 could be done in minutes, saving time for the contractor.

Access to the top deck of the parking garage structure was easy with the MC285 traveling on rubber tracks up to the top level, much like a vehicle would drive up into a parking garage. At 4 ft. 10 in. (1.2 m 25 cm) high, there were no overhead height concerns when traveling in the garage.

Overall weight of the MC285 of 4,325 lbs. (1,961.8 kg) meant that it could travel and be set up in various jobsite areas without the concerns and issues of much heavier conventional equipment. Narrow width of 30 in. (76.2 cm) let the MC285 access tight areas and maneuver in close quarters if needed.

Safety was a primary concern for the contractor. The MC285's moment limiter safety system with load charts programmed in, combined with Maeda's outrigger interlock safety system, made hoisting panels of various weights from floors below safe and efficient for the operator.

The MC285 stops hoisting function if the crane's capacities are exceeded. Equipped with anti-2-block safety device at the boom tip, emergency stop buttons at both ends, and other integral visual and audible alarms, Maeda mini-cranes are equipped with safety features.

Tower crane utilization is critical on high-rise projects. The MC285 excels on job sites where the tower crane can't reach, or is busy doing other tasks for various contractors. Maeda's versatile MC line also includes the longer boom and capacity MC305 and MC405 which, along with the MC285, have been used extensively to free up tower cranes on busy job sites to do other work.

Crews using the MC's can operate independently of the tower crane, for such tasks as glass and curtain wall installation, setting rebar and erecting steel. On this project, the tower crane could not reach the areas that the curtain wall was being installed, so the MC285 was called in to handle the task.