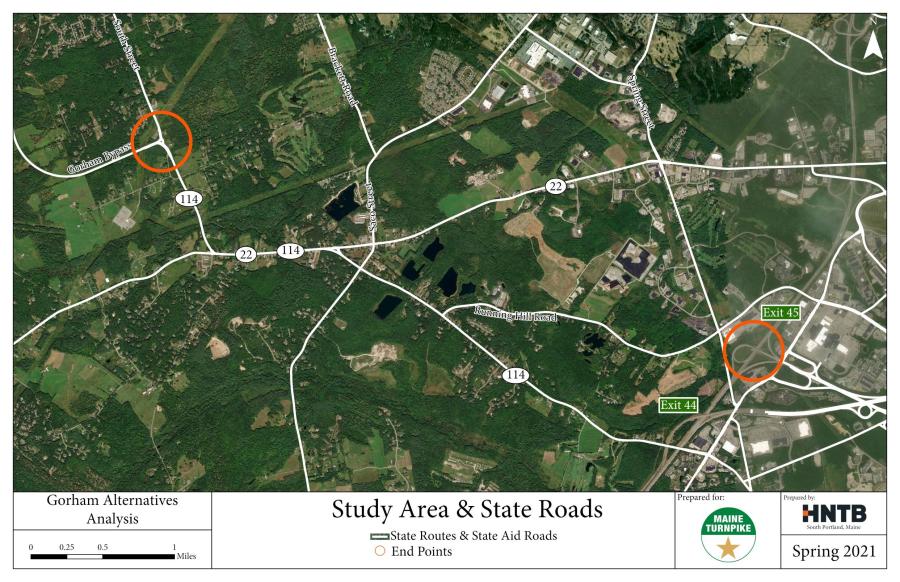 The upper left circled area on the map depicts the southern end of the Bernard Rines Bypass in Gorham. The lower circle is Turnpike Exit 45 near the Maine Mall in South Portland. (Maine Turnpike Authority image)

The Maine Turnpike Authority (MTA) is set to hold public hearings on further details for its proposed four-lane tolled connector linking the Bernard P. Rines Bypass in Gorham with the Maine Mall area in South Portland.

The 6-mi.-long roadway is aimed at reducing bumper-to-bumper, rush hour congestion on state and local roads in the area. It would "greatly relieve" Gorham's intersection at Cumberland County Road 22, and South Street (Route 114), along with McLellan and Brackett roads in Gorham, which are "jammed," said Peter Mills, executive director of the MTA.

Mills, in a late November interview with the American Journal, a Portland Press Herald community news site, outlined the most recent plans for the connector, which would come with an estimated $1.50 toll.

MTA Has Plan for Project Funding

The Gorham Connector is expected to cost "at least $220 million," possibly $240 million, Mills told the Journal.

Gorham, Scarborough, South Portland and Westbrook have all endorsed building a connector, and the Maine Legislature in 2017 passed a bill authorizing the turnpike authority to construct one.

The maximum amount the MTA can borrow for the road was capped at $150 million by the Legislature four years ago. The authority would pay for construction from a combination of revenues and bonding, along with some additional funds from combined turnpike reserve accounts for interchanges and improvements that totaled $73.5 million at the end of October, Mills disclosed.

He explained that Gorham and Scarborough are the core communities in the planned corridor.

Although the exact route has not been determined, Mills explained that the proposed highway would slice through a portion of the northern nine holes of the Gorham Country Club golf course.

A bridge would carry the connector over both Brackett Road and the Stroudwater River in Gorham, while another would take it over Saco Street near the Gorham-Scarborough line. Current plans call for the highway to "skirt" the hayfield of Smiling Hill Farm on Route 22 in Scarborough where an interchange would be constructed, Mills said.

From there, the new roadway would run behind Gannett Drive Business Park in South Portland, pass under Running Hill Road in Scarborough, and terminate at the turnpike's Exit 45. Driver options at the

Exit 45 interchange would include heading north toward Augusta, south to Boston, and east to Interstate 295 and U.S. Highway 1.

The project would likely require the removal of three homes in Gorham, plus a few more on Running Hill Road in Scarborough, noted Mills, who added that since 2019 he has walked door-to-door to talk with impacted property owners.

Most Agree Connector is Needed, but Have Concerns

Mills and Erin Courtney, the MTA's outreach manager, presented the plan to officials in the communities impacted by the project.

Gorham Town Councilor Benjamin Hartwell agreed that a turnpike connector is needed but is concerned its convenience would increase development in outlying areas.

"I worry that additional development to our northwest will cause more traffic through the Gorham Village to get to the turnpike spur," Hartwell said in an email response to the American Journal.

Ronald Shepard, Hartwell's fellow Gorham town councilor, also is unsure about the Rines Bypass and South Street intersection. The MTA proposal links the connector to the southern end of the bypass at the existing South Street roundabout, which could be replaced with a traffic signal. He is concerned that a red light there could back up traffic along South Street to Day Road.

Shepard understands, though, the MTA's plan is "still in the drawing stages."

The MTA's board of directors will be updated on the proposal's progress Dec. 16. The board already authorized some land purchases, and Scarborough and Gorham properties have been acquired to ensure availability, the Journal reported. In addition, the MTA purchased land in Gorham across from South Street's Park & Ride, adjacent to the roundabout.

In 2022, the MTA could apply for permits to build the connector, including those needed from the Maine Department of Environmental Protection, the Department of Inland Fisheries and Wildlife, and the state's Historic Preservation Commission.

The U.S. Army Corps of Engineers will determine, though, whether the highway will be built.

Once permitted, construction on the connector could begin in late 2023, meaning the highway has a chance to open in 2025 or 2026.