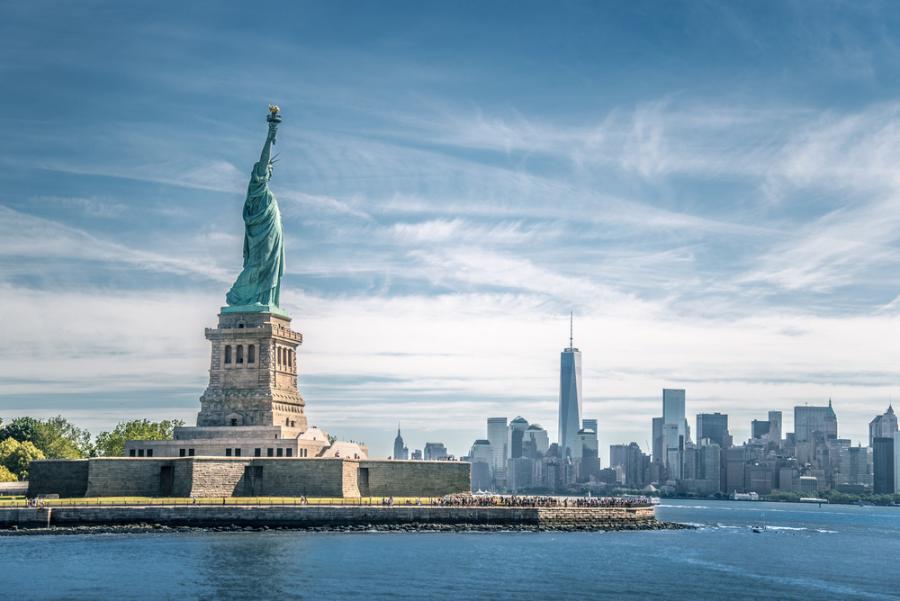 Maine's Freshwater Stone and Brick has long carved a name for itself restoring stonework at sites of historical significance, including the Brooklyn Bridge and the Cathedral of St. John the Divine, as well as most of the bridges in Acadia National Park.

He described Freshwater Pearl as being a speckled gray stone.

"Our stonework is going to be around for hundreds of years and viewed by millions of people," Horton proudly said.

Jeff Gammelin, who founded Freshwater Stone in 1976 with his wife, Candy, added, "It's the kind of project that opens up new job opportunities. We're making an effort to get into [more] restoration stonework."

In speaking with the Ellsworth American, Horton detailed his company's work for the Statue of Liberty.

He described the project as being "a sandwich construction" where the older granite on the outside of the monument is like that being fashioned by Freshwater Stone.

"But on the inside wall there's this local limestone that the whole Hudson Valley is made up of," Horton explained. "The limestone doesn't hold up very well, dissolving and disintegrating over time. So, they're going to remove a lot of the limestone and then install our stone as a veneer."

The first phase of the rehabilitation project is due to be completed by the beginning of July, the American reported.

The work on the iconic American statue is on behalf of the U.S. National Park Service (NPS), which maintains the monument and tourist attraction.

Complicating the project is the design of the statue's base, which was shaped as an 11-point star for defensive purposes in the 19th century when Liberty Island was originally used as a fort.

"It's a complicated geometry to put together," Horton said. "There are over 1,000 pieces of stone of various sizes and angles. This will entail at least six or seven tractor-trailer loads of stone traveling from Maine to New York."

The crew in Freshwater Stone's Frankfort quarry are currently slicing off large slabs of stone to ready them for truck transport across the Penobscot Narrows Bridge to Orland, where the slabs will be cut into blocks of various geometrical proportions.

Freshwater Stone has operated since 1976 and owes its longevity, at least in part, to paying attention to details.

To that end, the company is distressing the edges of the stone blocks — a feature Horton said the NPS did not know to request. To do so, his company will use torches and hammers.

"If they were to just put fresh-cut stone [on the statue] without distressed edges, it would look like a subway station," Horton explained.

Gammelin has built Freshwater to succeed by making its projects a company wide effort, employing a variety of skill sets.

"Probably half the people that work here will touch the stone," Gammelin said, adding there are projects for Freshwater's skilled masons as well as the newer staff. Currently, the company employs 58 people.

Gammelin said working for Freshwater Stone provides employees the opportunity, even at an entry level, to do meaningful work.

"You're doing something that's going to last a long time," he said to the American.

"In the past three years we've made significant investments in our quarrying operations," noted Andy Odeen, Freshwater Stone's general manager. "We purchased a WORD Raptor line drill and a Sandvik Commando DC130 top hammer drill in 2021, along with an Atlas Copco DC30 Down the Hole drill in 2020. These investments allow us to significantly increase the amount we can extract in a year, take less time to setup/breakdown and [they] are more environmentally friendly than our other drilling machines.

"The two new drills are twice as fast as the existing drills," he continued. "This is in addition to a new wire saw and generator that since 2017 has increased our ability to wire saw quarry benches four times as fast as our prior wire saw."

Gammelin recently traveled to Europe to buy a new Wires Engineering Easy 11 Plus Gantry from a company in Toulouse, France.

"This is one of several pieces of equipment we are looking to purchase as part of a future expansion of our architectural division," said Odeen.

The 46-year-old company has four divisions: the architectural stonework division, the stone construction division, the fabrication shop and the quarries.

Statue of Liberty One of Many Historical Renovations

The Ellsworth American reported that, repeatedly, Freshwater Stone has proven its ability in completing historical renovation projects that require blending the old with the new as seamlessly as possible.

Of the many projects it has taken on over the years, helping to replace old stone on the 135-year-old Statue of Liberty may give Freshwater its highest profile. It certainly elicits a tremendous source of pride within the Maine company.

The base sits on top of an 89-ft. pedestal, according to a history of the statue, and was designed by noted engineer Francis Hopkinson Smith, with help from Alexandre Gustav Eiffel, who created the Eiffel Tower in Paris.

Other historically significant projects Freshwater Stone has done across the United States include installing pink stone in the White House as well as work at the Old Red Museum of Dallas County History and Culture in Texas, and the St. Louis Public Library in Missouri.

In its home state, the full-service quarry company worked on the Witherle Memorial Library in Castine and performed stone restoration on the carriage trails and bridges in Acadia National Park on the Maine coast.