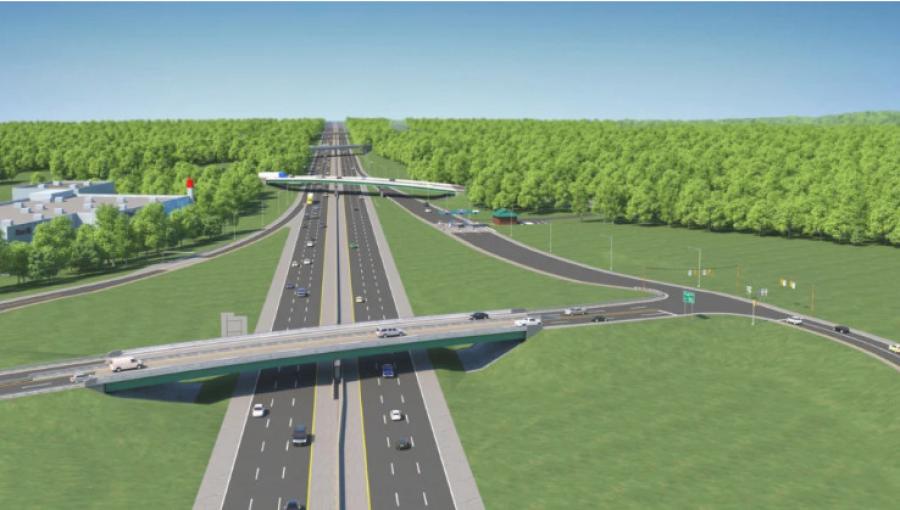 A rendering of the redesigned exit 45 looking south. The red-colored tower on the left is the site of the Christmas Tree shop. (Maine Turnpike Authority)

The Maine Turnpike Authority (MTA) is starting construction on one of its most expensive transportation projects in years, a $28 million rebuild of the Exit 45 interchange.

The heavily traveled turnpike exit facilitates the movement of traffic in and around the congested Maine Mall in South Portland.

Reconstruction of the Exit 45 interchange, commonly known as the Maine Mall exit, will not be fully finished until 2023, according to a news release from the turnpike authority.

MTA officials said the project will be designed to handle anticipated future increases in traffic volume in and around the mall, an area that is often clogged with vehicles. In addition, the project will result in the creation of two new ramp toll plazas that can accommodate northbound and southbound traffic, as well as a new, higher and wider bridge providing 16.5 ft. of clearance over the Maine Turnpike.

The existing bridge has been struck multiple times by over-height vehicles and needs to be raised 6 ft., according to the MTA.

The existing toll plazas are awkwardly designed, forcing drivers attempting to access the turnpike from the Maine Mall to drive down a ramp and circle back into traffic before they can pass through the plaza. After travelling through the toll booths, vehicles merge into traffic that must crisscross lanes to reach the southbound or northbound exits.

"When completed, Exit 45 will have a more efficient diamond-shaped interchange, a brand-new bridge with increased clearance and ramp toll plazas giving drivers a safer, more fluid connection to the turnpike," Executive Director Peter Mills said in a statement. "It's also the last plaza on the pike to receive tolling system upgrades. Once all the plazas are on the same platform it gives us greater flexibility to enhance our electronic tolling capabilities — all which benefit our customers."

The MTA awarded the interchange reconstruction contract to CPM Constructors of Freeport. CPM's bid came in at $27.6 million, according to the contract notice posted on the MTA's website.

In addition to the interchange rebuild contract, the turnpike authority hired Stillwater, Maine-based Sargent Corp. in 2019 to pre-load the interchange site with gravel and other materials. The contract loaded the new ramp locations and approaches to the new bridge with gravel to allow the materials to settle for a time before pavement and other structures can be built on top of it.

The contract with Sargent cost the MTA $14.7 million, bringing the total cost of both projects to more than $42 million.

"Because the area around Exit 45 has soils that are mostly clay, building in this environment causes an undesirable amount of settlement," said Peter Merfeld, chief operations officer of the turnpike authority. "By pre-loading and installing wick drains, we were able to compress the soils by as much as six feet in some locations and this work has allowed us to start the much-needed reconstruction sooner."

Construction crews set up concrete barriers, restripe the roadway and shift traffic away from the median. That work will be followed by some ramp closures in April.

The new interchange is expected to be finished by September 2022, but demolition of the existing toll plaza and old bridge will likely continue into 2023.