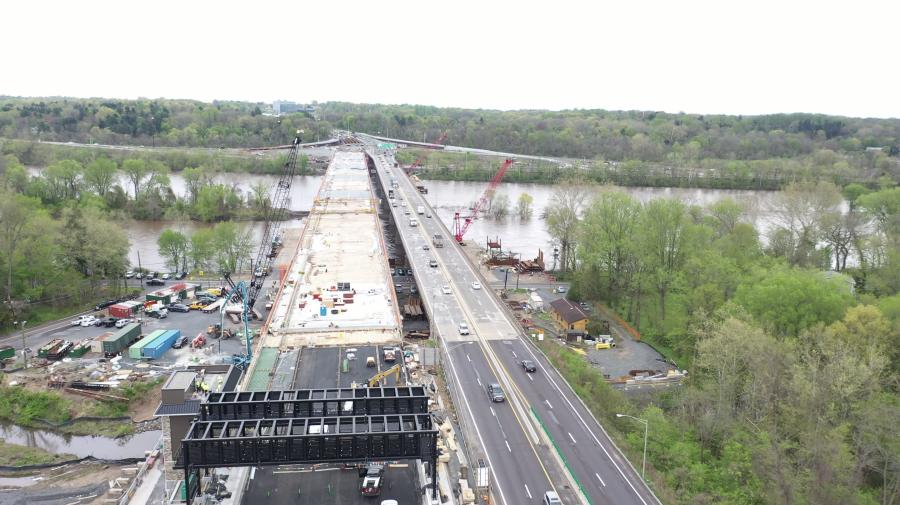 Concrete pouring for the new bridge's first span began on March 14. A series of subsequent concrete deliveries occurred on various weekday mornings based on weather, temperature, work staging and concrete curing considerations. All totaled, approximately 135,000 cu. ft. of concrete were poured and pumped onto the new bridge's 1,815-ft. road deck over the past six or so weeks. That works out to around 20 million lbs. of concrete, or roughly 10,000 tons.

A series of right lane closures in the Pennsylvania-bound direction were utilized to facilitate the unloading of nearly 500 concrete delivery trucks. Delivery dates were staged according to weather, curing and temperature considerations.

The concrete will now be allowed to cure until it reaches its prescribed operational strength rating. When that occurs, further deliveries of concrete will occur for the bridge's parapets and the reinforced median that will separate the walkway from vehicular traffic.

Additionally, an overlay of high-density polyester-polymer concrete (PPC) will be applied atop the conventional concrete. This roughly 1-in.-thick wearing course of concrete is longer lasting and more impervious to water and salt than conventional Portland-based concrete.

With each passing week, the new bridge's first span moves closer to being completed immediately upstream of the current 59-year-old "functionally obsolete" Scudder Falls Bridge. A specific opening date has yet to be determined, but the bridge is expected to begin carrying traffic sometime in July if the pace of construction remains on track.

Once traffic is shifted onto the upstream span this summer, the current Scudder Falls Bridge will be closed and demolished. The new bridge's second span will then be constructed immediately downstream of the first span. The second span is expected to open to traffic by early 2021. When both spans are completed, the downstream span will only carry traffic in the NJ-bound direction and the upstream span will be converted to carry PA-direction traffic only. Full project completion is expected to occur later in 2021.