Known as the 76 Revitalization Program, the project will transform West Highway 76 into a safer and more attractive street for residents and visitors alike. 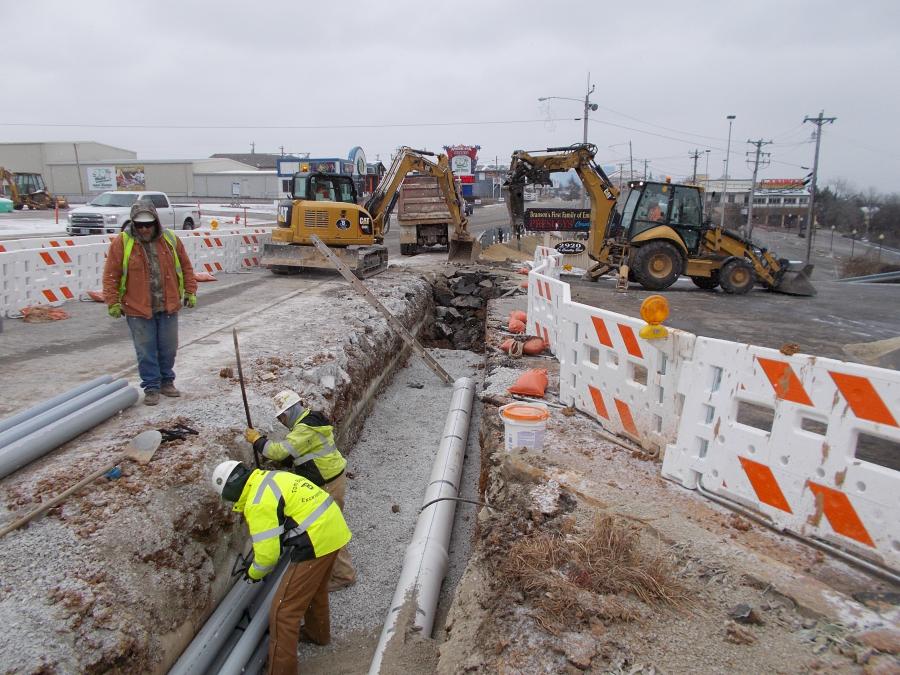 A private coalition of Branson’s business leaders has spearheaded an $80 million, six-year-long upgrade of the corridor that transports tourists through the town’s entertainment district, just to the west of downtown.

Even though the small town of Branson, Mo., has about 12,000 residents, the picturesque Ozark Mountain community is projected to draw close to 8.8 million visitors this year.

That is due, of course, to Branson being one of the nation's most popular vacation and entertainment destinations with 16,500 hotel rooms, hundreds of restaurants and retail stores and almost 80 live show venues and attractions.

Not surprisingly, the ecomic impact of so many tourists in Branson is huge, with hundreds of millions of dollars being there spent each year.

But the expanding number of visitors also has put a strain on the infrastructure of what is still, at heart, a small mountain town, situated on a ridge just north of the Arkansas line.

With that in mind, a private coalition of Branson's business leaders has spearheaded an $80 million, six-year-long upgrade of the corridor that transports tourists through the town's entertainment district, just to the west of downtown.

Known as the 76 Revitalization Program, the project will transform West Highway 76 into a safer and more attractive street for residents and visitors alike.

Easing the Way for Tourists

The 5-mi. (8 km) stretch being updated is part of Missouri Highway 76/Country Blvd., which is lined with many of the theaters and amusement attractions for which Branson is famous.

The private coalition, Project Branson, aims to make the road and its sidewalks easier to travel for motorists, pedestrians and users of public transportation.

The hope is that the project also will help relieve some of the traffic congestion along the West Highway 76 corridor, which averages about 26,600 vehicles per day moving along only three traffic lanes, including a left-turn lane.

Because many of the town's buildings are close to the street, widening the road is not a viable option and is not part of the 76 Revitalization Program.

However, the improvements now being made should begin to address West Highway 76's issues as early as this summer.

Current Work to Be Done by End of May

The first $11.2 million stage of the multi-segment program began last September. Major construction on this segment will conclude by this Memorial Day weekend — in time for the summer tourist season, according to Jerry Adams of Olsson Associates, an engineering and design firm based in Lincoln, Neb.

The company is coordinating all aspects of the revitalization project for the city of Branson, including survey, design, right of way and utilities coordination, construction inspection and construction management services.

Crews are currently focusing on building a continuous 8-ft. (2.4 m) wide pedestrian walkway on each side of West Highway 76, as well as creating new infrastructure for future underground utility installation, including water, electric and two telecommunication lines.

Todd Chandler, construction manager of Olsson Associates, said that the total distance of this current segment of the work is about three quarters of a mile along West Highway 76 from a point near the intersection with Rosalee Drive (at the famous Presleys' Country Jubilee Theater) to near the site of the Track Family Fun Park and the new Branson Ferris Wheel.

“This segment has the highest density of pedestrian traffic on the entire West Highway 76 strip,” Chandler said.

Then, construction crews will progress to the west along West Highway 76 and follow it as the boulevard takes a northerly track. Work will then continue another mile toward Shepherd of the Hills Expressway.

The underground conduit work is being installed by Tom Boyce Excavating in Branson. The company owns its own equipment, such as a John Deere 225 and several Caterpillar mini-excavators, track hoes and larger excavators for breaking up rock. Fabick Cat in Springfield is its preferred dealer.

Chandler said that these machines have enabled the contractor to break and dig out the underlying limestone for the utility installation.

Eventually, planners want to have all overhead utilities moved underground for both aesthetic purposes and to keep them off needed sidewalk space, which also serves to improve pedestrian safety.

Following right behind the underground utility conduit work is the construction of new sidewalks, which will eventually be built the entire length of the project on West Highway 76.

Springfield's Carson-Mitchell Inc., Engineers & Builders is handling this part of the current phase. All of its work is above-ground, including installation of the road's lighting package.

“We are working on putting in a wide and decorative sidewalk, along with two-foot-tall retaining walls that will serve as seating walls,” Chandler said. “So as soon as the utility work is finished and they have the duct bank in, we are coming in behind them and constructing the walkways and finishing up the pedestrian amenities.”

New sidewalks are sorely needed, he said, due in large part to the heavy foot traffic over the years. He added that some of the walkways were not much more than crumbling asphalt.

“Also, some of the old sidewalk is only at the roadway elevation,” Chandler said. “But, we are putting a new curb and gutter in and making certain that the walkway itself is high enough off the street surface to ensure a safer place for folks to walk.”

Other than the occasional Cat mini-excavator with a rock breaker on it, most of the sidewalk and curb and gutter work done by Carson-Mitchell depends on manpower, Chandler said.

For instance, Carson-Mitchell's crews are installing a cast-in-place concrete wall with a decorative stone façade and accent lighting.

Additional plans call for improved wayfaring signage and real-time traffic information to enhance the flow of vehicles, residents and tourists. In addition, shared parking, fewer driveways and on-call signal crossings will be installed to encourage walking and to help keep traffic tie-ups to a minimum during the peak seasons.

Chandler added that distinct street and pedestrian lighting also will be installed along West Highway 76.

Beyond this current work, the 76 Revitalization Program also is moving forward with new parks, landscaping, scenic overlooks and trails in Branson to help visitors enjoy the beauty of the town, tucked in the low hills of the Ozark range in southwest Missouri.

Work will be limited during the peak summer tourist season, but will ramp up again after that in stages through at least 2022.

Many Involved in Effort

Project Branson has involved more than 200 private property owners in the effort, many of whom provided voluntary joint-use-easements to accommodate the space needed for the work.

Olsson Associates has built a strong presence in southwest Missouri, with offices located in Branson and Joplin. The firm also has many other locations in the central United States.—CEG