Make It One Original Taco Bell Restaurant — To Go?

A $14.4 million construction project to replace a historic bridge connecting Prescott to northern Arizona has used more than 70,000 lbs. (31,751 kg) of explosives as crews tackle the rugged terrain. 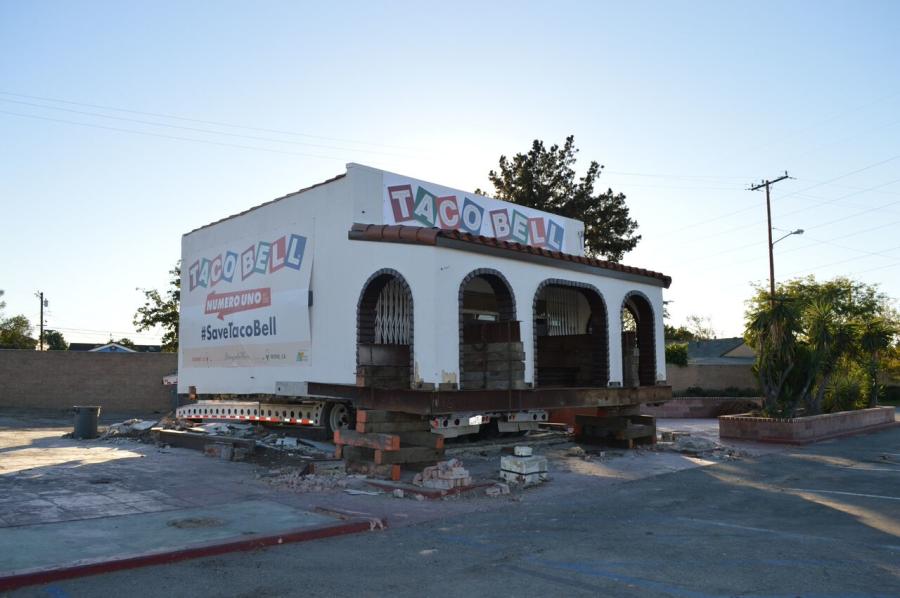 Moving any historical building can be a challenge, but moving a 400-sq.-ft. (37.16 sq m) plywood and stucco restaurant thrown up with materials from the hardwood store, takes the task to an entirely new level.

Moving any historical building can be a challenge, but moving a 400-sq.-ft. (37.16 sq m) plywood and stucco restaurant thrown up with materials from the hardwood store, takes the task to an entirely new level.

Keeping the original Taco Bell restaurant intact while moving it was just one of the challenges the nonprofit We Are The Next faced last month after it contracted with corporate Taco Bell to truck the restaurant 47 mi. (75.6 km) from its original home in Downey, Calif., to Taco Bell’s corporate headquarters in Irvine, Calif.

“Our biggest worry was the construction of the building,” said Katie Rispoli, executive director for We Are The Next, which she describes as a civic engagement group that uses preservation for its message. “Unlike most historic buildings, this was not made of brick. It was not sturdy and constructed with 100-year-old trees, but actually built of plywood with stucco. It was very quickly thrown up and built on a whim using money Taco Bell founder Glen Bell borrowed from friends. It definitely was not a laborious endeavor.”

The project got underway in January 2015 after the landowner on which the original building sat notified Taco Bell that they planned new development for the property and the restaurant would have to go. Working with multiple agencies, they mapped out a journey from Downey to Irvine winding through nine jurisdictions, all on back streets and traveling only at night.

“We had to get permits from eight city governments, and both L.A. and Orange Counties and CalTrans,” Rispoli said. “It was a lot of permitting which was all done by our organization. It was a very extensive process to get all the permits aligned. To get everyone to agree on path of travel, same day and same time was definitely a challenge.”

When moving time came, the crew from Brandt House and Building Movers cut the restaurant — about the size of a two-car garage — from the slab foundation. Next, they created an interlocking system of iron beams running through the building.

“One went through the food service windows and went out through the back door,” Rispoli said. “Another, through the other side of food service window. They had to create holes in the walls for it to go through the building. Before the steel beams, I was wary of the building. But we had a great structural team working on it. We had it evaluated a couple of times. The building is very small, but about right down the center is the walk-in refrigerator. The wall of that refrigerator was so thick, it had held up the roof. There was almost no bowing of the plywood, which was very fortunate.

“Once the beams were in place, they used a series of poles to lift the building. They got it lifted just a couple of feet and drove the trailer underneath it. Essentially, they backed up the truck into the opening beneath the building and lowered it back down on the trailer bed.”

The restaurant stayed on the trailer for about five days while workers went through the little building and removed historical artifacts, such as the microphone for ordering from the exterior of the building and the signs above the restrooms.

Moving night arrived and at 10:15 p.m., the caravan pulled out of Downey. Five California Highway Patrolmen — three in the front, two in the back — provided the escort.

“For the first 10 minutes it was really nerve wracking,” Rispoli said. Then, they passed a woman watching from her car. “She rolled down her window and said, ‘Goodbye Taco Bell,’” and that was the ice breaker. After that it wasn’t really nerve wracking. It was pretty exciting.”

They stopped at no red lights, thanks to CHPs, and a little more than three hours later at 1:30 a.m., they arrived in Irvine.

But in six months they may be doing the move all over again. Taco Bell is now trying to figure out how best to utilize the building spokesman Matt Prince describes as “arguably the most influential in our company’s history.”

To figure that out, they are turning to fans for their input.

“We truly would like their feedback where they’d like the building to go,” Prince said. “It could stay here at corporate as museum, or go back to Downey as a community space or as a working restaurant. It would be great to see the building take its previous form as a restaurant.”