Making Drones Work for You on the Job Site

It's well known that drone deployment in construction is growing exponentially, but how exactly are the UAV (Unmanned Aerial Vehicles) machines employed? To learn more about the specifics, Construction Equipment Guide spoke with two SpawGlass staff members: Richard Evans, a drone integration specialist, and Grady Frank, a quality control superintendent, about how drones are having an impact on recent projects.

"Right now, we're working on a new Science and Tech building for Texas A&M University in San Antonio," said Frank. "The owners of the project require that we submit aerial shots of our progress every month, along with our invoices.

"Previously, we used either a helicopter or an airplane to get the required shots; this is common for large construction projects, so there are flight services available for just this kind of work. However, because we have access to Richard, a drone expert, we were able to forego the usual distance shots and employ his equipment from the start."

The drones offer not only savings — Evans estimates that they cost about a quarter of the price helicopter flyovers routinely charge — but also provide enough photographic detail to aid in greater precision for other common aspects of construction, such as the ability to calculate cubic yardage of material such as pile dirt, for either removal or replenishment. This leads to more precise budgeting, an invaluable tool on construction jobs. 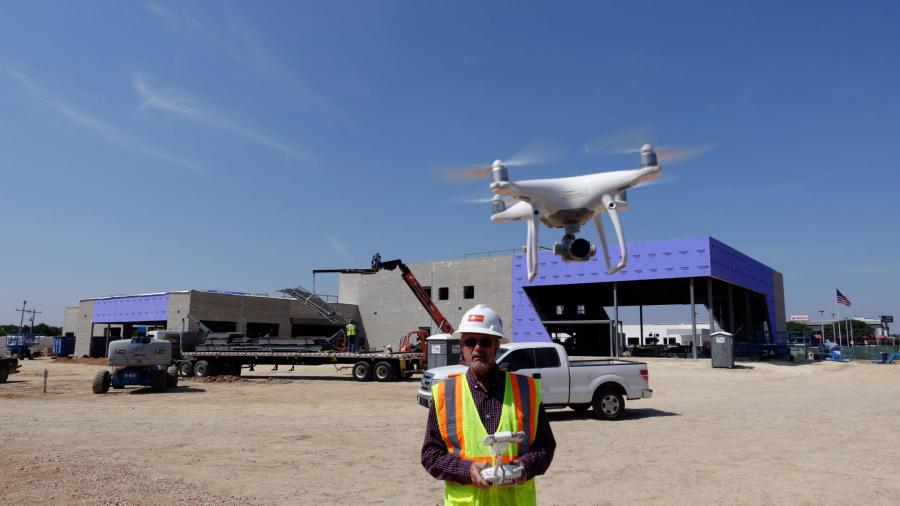 "Using a program called DroneDeploy, which utilizes PhotoGrammetry, we can build a model where volume of material is the data we look for. DroneDeploy is able to assemble many aerial photos and stitch them together. By overlapping these photos, the software can triangulate and compute the contours of the pile and thus be able to calculate the cubic volume. There are other ways to do this, but suitable drone and software can do it quicker, more accurately, and with less expense."

The drones also provide the ability to calculate linear lengths in order to demonstrate actual job progress, a feature much appreciated by project employers. This is due to the accuracy of the 2-D map feature, which produces extremely detailed photographs.

A further benefit of drone usage is the equipment's ability to function in all types of weather, therefore dispensing with dependency on clear skies for deployment.

Not surprisingly, Frank is very happy with the drones. "They do a great job," he said. "The clients are very keen on their use as well." 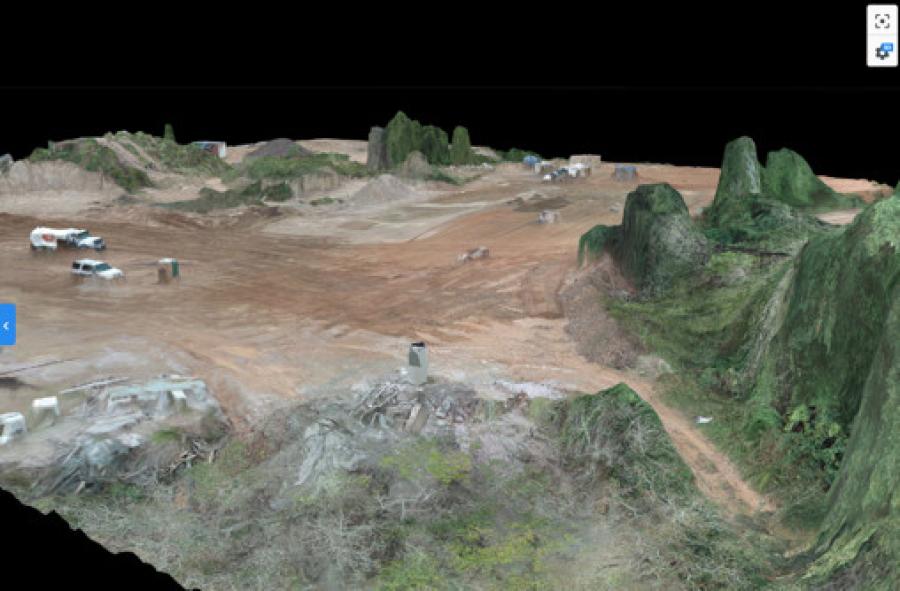 Evans notes additional benefits to drone usage, such as the machines' ability to provide a 360-degree view of job sites, as well as offering smoother images than those possible with cameras held by human hands. Yet perhaps the most important advantage is the significant contribution to safety: by providing highly-detailed views, job superintendents or others are able to easily discern where previously unrecognized dangerous conditions exist, and can therefore take quick action to prevent injuries or site damage.

Evans adds, "We also archive all our imagery in our media storage and in the case of a dispute of some type, the photo/video archive can be used to verify visual data that might solve a dispute. In the world of litigation, protection from claims can be increased if you have good documentation that might just have the information you need in the photo/video archive. We call it ‘Super Documentation'."

As helpful as the drones are in the Texas A & M project, Evans is quick to list other uses.

"There are civil applications available as well," he explained. "Some contracts are calling for documentation of site conditions to take place before excavation. Once the project is completed, another flight over the path is done to confirm compliance. A good example of this usage occurred when we installed several miles of pipeline underground through an undeveloped area. The engineers supplied the route in Coordinates from Google Earth and with that information, we were able to plot a flight plan of the drone and use the resulting video to trace the track of the centerline of the pipe. The objective was to identify if the route planned would need to be adjusted so as to avoid important trees or other obstructions. The drone does a great job [due] to the precision it can achieve when flying locked into an autonomous altitude and path. We have since installed several of these lines covering over 2-1/2 miles total."

The drones also help with roof and façade inspections. Evans explained how. 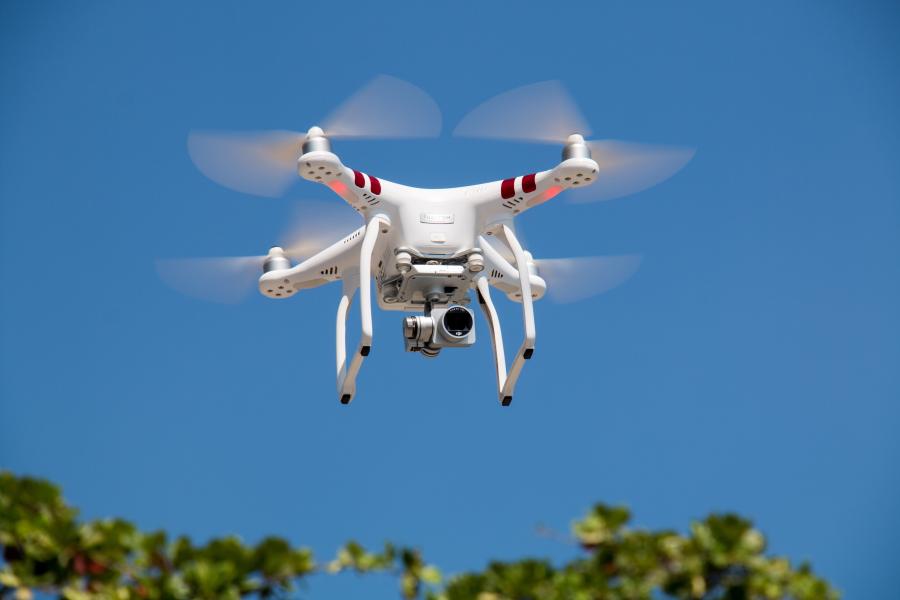 "We have a situation where a six-year-old building has developed a water leak at the windows when there is a driving wind to the south. We are using a drone to fly just a few feet away from the side of the building and are taking pictures to see if we can identify where the leak is coming from. For this operation, we will be streaming video from the drone to a wide screen TV that will be in the parking lot shielded from the sun. That way, we can have our crew and the owner's representative view in real time the joints in the side of the building. From there, we will determine where the leak is and then we can redo the facade exactly where the repairs need to be made. We have used this live streaming method before and it is very effective."

The Texas A & M project has relied on three specific models: a DJI Phantom 4 Pro; a Mavic Pro, and a Mavic 2 Pro. The drones are part of Evans' own collection.

"I'm very confident in my drones," Evans said. "While I do try to baby my machines, in truth there's been very little to no downtime. Once when a machine was damaged on another job site, it took only four days to replace it, which is very fast for any type of equipment used in construction."

Because of their tremendous success, SpawGlass plans to purchase its own drones in coming months. 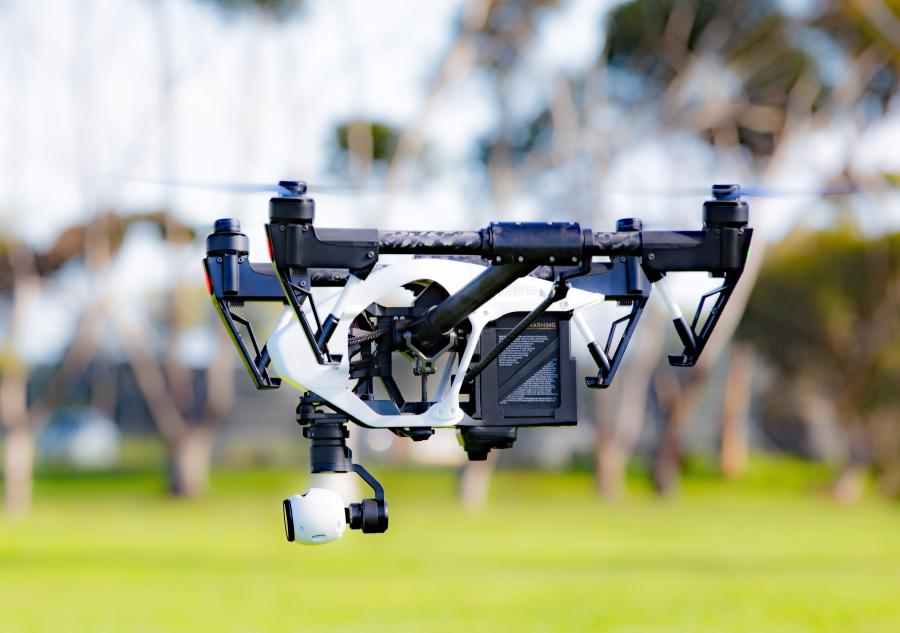 "We intend to acquire a drone with a specialized camera to use for the purpose of looking for heat and cooling leaks," Evans said. "Older buildings often have faulty ducts, or tape joints that have come loose, and therefore waste a lot of money heating and cooling any attics. This is a further use for drones. Additionally, we'll soon be able to stream images in the form of photos/videos to a group watching the HD video provided by the drone. The group will inform the drone ‘pilot' what they want to see. For example, when inspecting a complicated area, the pilot may not know exactly where to look, but the individuals who do know what to look for can give the pilot instructions as to which way to go to find a leak or other issue."

Clearly, the ascendency of drones on construction sites is wholly justified. It makes sense that their deployment will continue increasing, as even more uses become evident. It's further likely that project owners could begin specifically requesting drone availability as a requirement for winning jobs. Therefore, those company owners who are not yet on board with the technology may want to begin shopping around for UAVs that best meet their needs. Advance planning for technology upgrades could help set a company apart from its competitors.

SpawGlass was founded in 1953 by Louis Spaw and Frank Glass, hence the name SpawGlass. With 10 offices across Texas, the company has approximately 725 employees and is 100 percent employee-owned — with ownership open to all employees. Its mission is to provide our clients with the absolute best construction experience.