The Albany International Airport made sure that their runway rehab would be completed on time by instituting a $5,000 liquidated damages clause for every 15 minutes of delay in re-opening the runway. 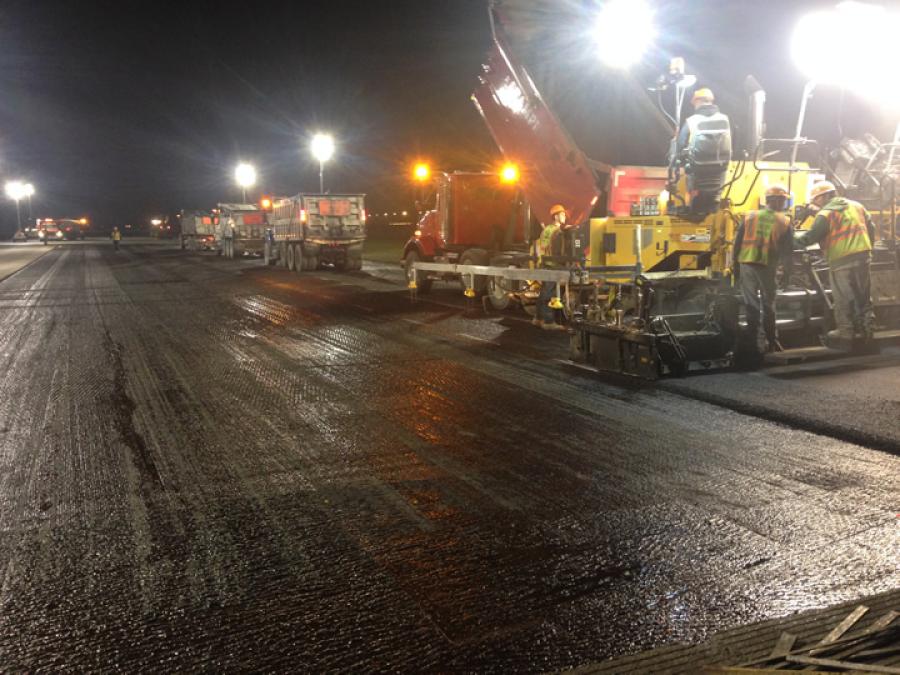 When an airport needs improvement, it needs to get the work done quickly, efficiently and correctly.

The business of an airport is to get people where they need to go, safely and on time. When an airport needs improvement, it needs to get the work done quickly, efficiently and correctly. Money talks, and the Albany International Airport made sure that their runway rehabilitation would be completed on time by instituting a $5,000 liquidated damages clause for every 15 minutes of delay in re-opening Runway 01-19.

Extensive planning, considering all factors that could cause delays in the project, and keeping to the project schedule is critical in this situation. It was with such a commitment that the Albany County Airport Authority and their consultant, Passero Associates, approached the Albany International Airport Runway 01-19 project in the fall of 2014 and summer of 2015.

Phase I consisted of removing in-pavement centerline light fixtures, milling, paving, and re-installing centerline light fixtures in two separate work areas, allowing aircraft to taxiway across the primary Runway 01-19 at all times. All work in this area was completed strictly as night work to allow aircraft to depart on time each and every morning.

As a condition of the contract, the contractor was required to have redundant, backup equipment such as milling machines, pavers and rollers on site, in case of equipment malfunction or failure.

Each morning they coordinated demobilization and cleanup, and opened the runway prior to the 6:00 a.m. scheduled departure. All centerline lights were removed before milling operations, and re-installed following paving operations.

During Phase II in spring 2015, the remaining portion of Runway 01-19 — approximately 150 ft. by 4,600 ft. (45.7 by 1,402 m) — and associated centerline lights were rehabilitated. This process included three separate work areas to allow aircraft to taxi across Runway 01-19. All centerline and touchdown zone lights were removed and later re-installed after completion of paving operations.

After Airport operations cleared the contractor to enter Runway 01-19 each night, Rifenburg would first close the runway by installing lighted runway closure markers at each end of the runway.

Then Rifenburg would close all surrounding taxiways with lighted barricades and install portable light plants on the specific work area of the runway. Milling machines lined up across the 150 ft.-wide runway and began milling off the top 2.5 in. (6.4 cm) of material and loading it onto trucks.

After sweeping and cleaning the milled surface, tack coat was applied, and paving operations began behind the milling operations. After paving work, quality assurance cores were taken for density testing of in-place asphalt. Temporary striping and pavement markings were applied to the new surface. Cleanup and demobilization of the runway was completed each morning by 6:00 a.m.

Pete LaFarr, superintendent at Rifenburg, said, “Our team worked very hard, working together as one, with all of us in sync, operating like a well-oiled machine to get this project done, pushing every minute we were on the runway. We spent a lot of time preparing each and every night, just to make sure we were ready for battle, and when the clock struck 10:00 it was go time.”

The most critical work area was in the intersection of Runways 01-19 and 10-28. The work window in this area, when both airport runways needed to be closed, was very tight and the runway could only be worked on early Sunday mornings from 1:00 a.m. until 6:00 a.m.

When the last scheduled flight arrival was delayed to arrive later than 1:00 a.m., work was cancelled for that work window. The airport worked closely with the airlines to ensure minimal disruption.

In order to meet the strict deadline, the entire project schedule was strictly monitored and adhered to. Throughout construction, the owner, the consultant team and the contractor held daily progress meetings, crucial to meeting the project goals.

According LaFarr, “Our team had to work smart to know exactly what we could do in such a short period of time. Once committed, everything had to click like clockwork, everything, and every part of it did and I am pleased to say it was a success.”

Due to a well-organized and determined contractor working with a well-seasoned team, Runway 01-19 has been successfully rehabilitated. Airport operations, the airport consultant and the construction team, working together, were able to maximize every minute available of the eight-hour runway closure, delivering production, quality, and most importantly, safety, with zero injuries. No flights were delayed and no liquidated damages were assessed.