Man on a Mission: Dealer Focuses on Laura Cleanup

There is no better time to "make it happen" than after a natural disaster.

Kurt Degueyter, 53, owner of Bottom Line Equipment is laser-focused on finding solutions for contractors involved in cleanup and recovery after hurricanes, and Hurricane Laura provided the most recent opportunity to do just that. 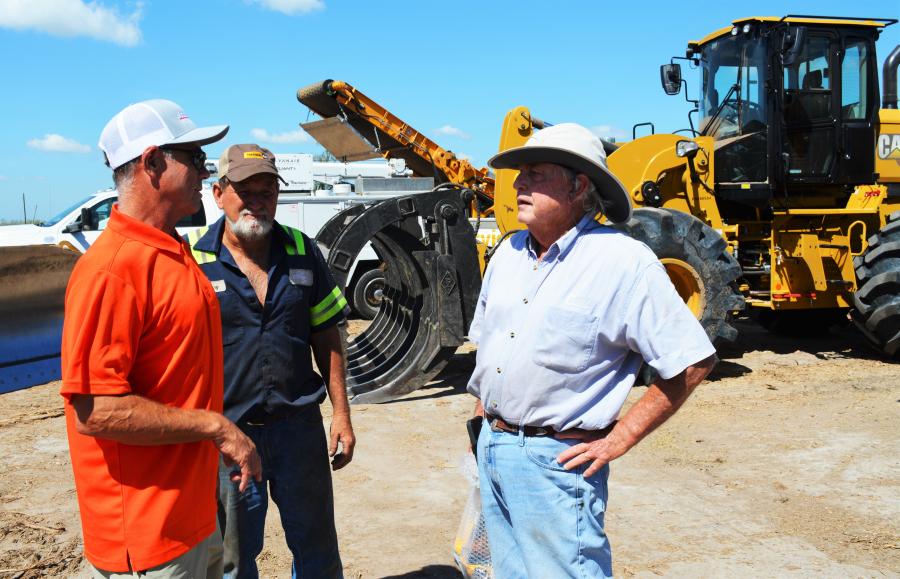 "Our company motto is just "Make It Happen," Degueyter said, as he embarked on a tour of the damage from the August 28, 2020, storm with CEG representatives.

"We enjoy being part of the solution," Degueyter added. "Hurricane Katrina hit New Orleans approximately one month after we formed the company, so storm recovery has always been a part of our DNA."

The tour left Bottom Line's Sulpher, La., service center and Degueyter made his way along I-10 toward the Port of Lake Charles. Along the way, he explained that disaster recovery is often divided into four sectors: cleanup and demolition, industrial, utility and highway.

He said his company has approximately 200 pieces of heavy equipment deployed in the four sectors.

Arriving at the port, the first glimpse of the storm's extensive damage was apparent; buildings were down throughout the port with men and equipment grappling with the cleanup work.

Degueyter pointed out a crew using an excavator and shear attachment to break up the remains of a huge metal structure.

Noticing the Bottom Line logo on Degueyter's truck, the operator motioned him to come over. There were questions about the way the excavator and shear were handling the job, and soon, Degueyter was in the cab, showing the crew a few tricks of the trade to get the most out the equipment (this from a man whose fleet includes 1,400 pieces of heavy equipment and more than 400 specialized attachments, and who has a staff of nearly 200 employees.)

Degueyter grew up in the equipment world; his father, Floyd, is owner of nearby CLM Equipment.

Rather than wait for what might have been a typical succession plan to unfold at CLM, and preferring not to "get a real job," Degueyter started Bottom Line Equipment out of his house in July 2005 with just two grapple attachments. Thirty days later, Katrina hit and in October 2005, he opened his first service center in St. Rose.

When Hurricane Katrina hit New Orleans later that year, the need for specialized attachments for cleanup work became clear, and Degueyter was off and running. 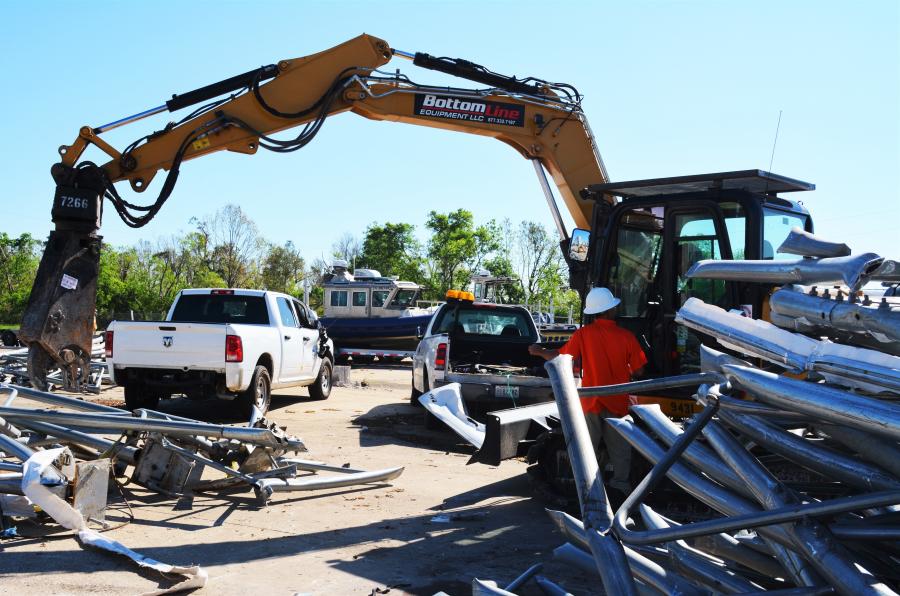 With little or no money to work with, Degueyter negotiated the lease of a building in the New Orleans suburb of St. Rose, along the state's "equipment row."

The company continued to grow, and its equipment played vital roles in Hurricanes Rita, Gustave, Isaac, Harvey and Barry over the ensuing years.

None of those hurricanes matched the intensity of Laura, according to Degueyter.

"It wasn't talked about much," he said, "but this was a category 4 when it made landfall. I've never seen so much destruction on the coastline."

This is personal for Degueyter — Southwest Louisiana is his family's home, he was watching his equipment do lifesaving work, and he was helping his customers, who are also his friends, tackle the job at hand.

At a pipeline transfer station project in Cameron Parish, the tour was interrupted briefly as Degueyter noticed an excavator with marsh grass and pluff mud above the cab. "That was definitely under water," he said, almost under his breath.

CEG asked him how many machines he may have lost in the storm.

"We don't know yet," he said, with surprisingly little emotion. "We started pinging our units five days out from the storm, but we won't know the extent of our losses for quite a while."

The stop at the DMS was extended as Degueyter and Lyman Ramsay of Gulf Services discussed additional equipment needs for the operation. Already, within days of the storm, Bottom Line had excavators, loaders, dozers, side dumps and water trucks on the site.

Leaving Lake Charles, Degueyter was intent on reaching the actual Gulf Coast, where the small town of Cameron drew the wrath of the storm's eye as it made landfall.

Travelling through 30 miles or so of marshland, there was an eerie feel of loss. The only traffic was power line trucks, manned mostly by out-of-town lineman brought in to speed up the recovery process. One crew from Georgia had hung a Georgia Bulldog flag from a freshly installed power pole, much to Degueyter's dismay — he's an avid LSU fan. "We'll get that down later," he said, with a smile. 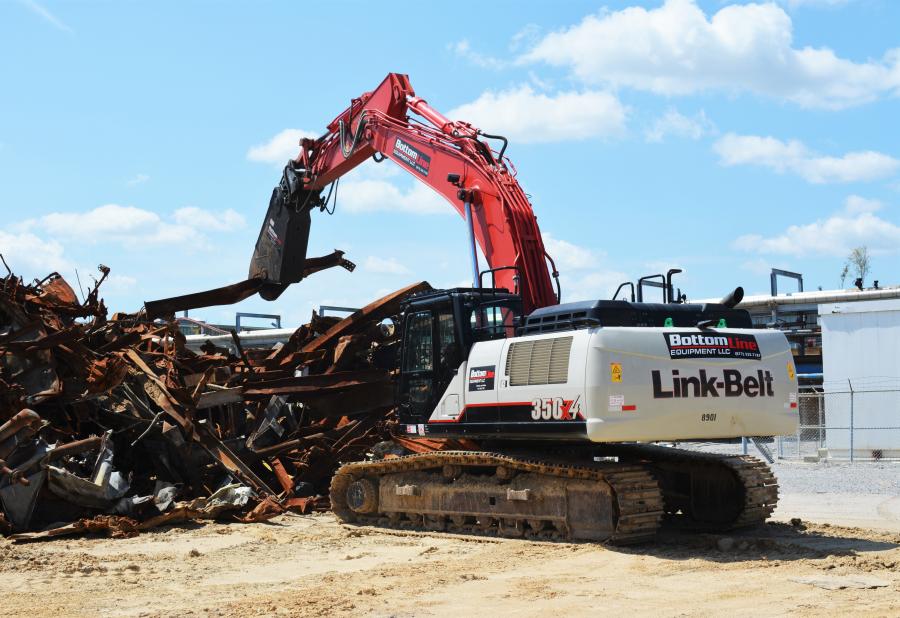 Approaching Cameron, and dodging houses literally in the middle of the road, Degueyter pulled over when he saw his equipment at work reinforcing a compromised highway. It wasn't long before he was in the cab of a Cat dozer, diagnosing some minor DEF issues. After a few minutes, he was dispatching another dozer to the site. "Time is everything," he said.

The devastation in Cameron was depressing. All homes were destroyed — it would be easy to wonder if the area would ever be populated again. A large offshore oil rig, in the small port for work, was toppled as if it were a 30-ft. sailboat.

Back in Lake Charles, Degueyter checked on a contractor working on residential power lines in a lower income part of the city. He knew he had another excavator/shear package working on taking down damaged lines, and he was intent on checking with the contractor, Diamond D Industries, to see if there were any equipment issues.

Moving road blocks, maneuvering around debris and jumping medians, Degueyter eventually got to the Diamond D crew, working feverishly to restore power to folks who desperately needed it.

As the tour of the Hurricane Laura devastation concluded, another hurricane was gaining strength that could potentially strike eastern Louisiana and Mississippi. Degueyter was keeping an eye on that, already making plans in case his equipment would be needed to aid in rescue, recovery and restoration. He was poised to ensure that Bottom Line Equipment would "make it happen" again, just in case, good things were needed after a bad thing happened.