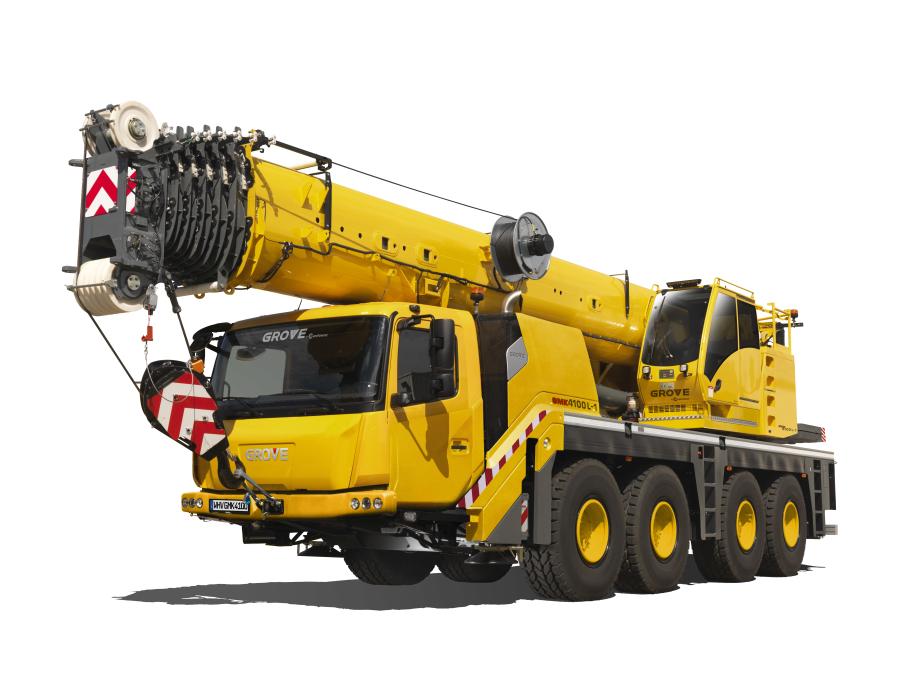 The four-axle Grove GMK4100L-1’s load charts and its compact design makes it easy to access and maneuver on the narrowest of job sites.

Manitowoc has introduced a new Grove all-terrain crane for the global market. As with other recent Grove launches, the crane offers unique innovations and class-leading capabilities in the taxi (road travelling) category, according to the company.

The four-axle Grove GMK4100L-1's load charts and its compact design makes it easy to access and maneuver on the narrowest of job sites. The new 110-ton (100 t) capacity crane replaces the GMK4100L and is part of a new generation of Grove taxi cranes.

Grove was the first manufacturer to produce a 110-ton capacity crane on four axles when it introduced the GMK4100L. The new GMK4100L-1 has some notable improvements.

Customers in North America also will benefit from the crane's fully removable counterweight — which reduces the basic crane's gross vehicle weight to the lowest level in the four-axle category for a 110-ton rated machine with a 197 ft. (60 m) boom. Boosting the crane's overall reach is a 59 ft. (18 m) telescopic swing-away jib, which can be extended with an 26 ft. (8 m) boom extension for a total jib length of 85 ft. (26 m). The telescopic swing-away jib offers an improved offset of 0 to 45 degrees.

Jens Ennen, senior vice president all-terrain and truck-mounted cranes at Manitowoc, said the new GMK4100L-1 is the result of improvements and innovations developed at the factory in Wilhelmshaven, Germany, where the crane is built.

“We have focused strongly on bringing superior reliability, return on investment, ease of transportation, user friendliness and capacity to this crane,” he said. “With class-leading load charts and specifications, the new GMK4100L-1 is a highly mobile crane that is suitable for use on job sites around the world. The GMK4100L exceeded our expectations in both performance and reliability so we are expecting the GMK4100L-1 to continue this tradition.”

The GMK4100L-1 is powered by a single engine, reducing the weight of the crane and allowing it to carry more counterweight, which improves lifting ability. The Tier IV Final/EUROMOT 4 Mercedes-Benz OM470LA is a six-cylinder diesel engine with a 320 kW rating at 1,700 rpm and a maximum torque of 2,100 Nm at 1,300 rpm. The crane also is available with an equivalent Tier III engine. Better profitability for users is available through the inclusion of the fuel saver function on the Tier IV Final/EUROMOT 4 engine.

The GMK4100L-1 also has Manitowoc's new crane control system (CCS) and the new boom configurator mode. The standardized CCS is a user-friendly interface that Manitowoc is featuring on all new crane models. The CCS components and operating software have been specifically designed, developed and tested by Manitowoc engineering and innovation teams worldwide to ensure the highest reliability standards. The highly intuitive boom configurator mode makes it quick and easy to select the optimum boom position for a specific lift, according to the company.

The operator inputs the lift parameters such as radius, load or boom length to be moved and the system calculates the best boom configuration. Once the operator selects the preferred option, the boom automatically extends to the required length.

The look of the crane also has been improved with a facelift that includes a new ergonomic carrier cab. Trademark features such as the TWIN-LOCK boom pinning system, MEGAFORM boom shaping and MEGATRAK independent active suspension, are all included in the new GMK4100L-1.