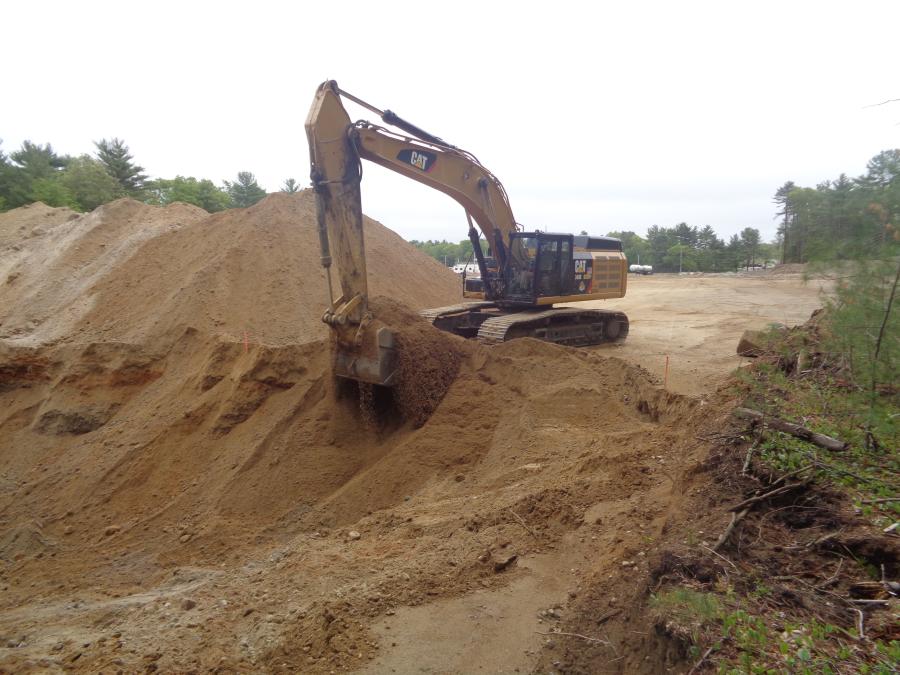 In Mansfield, Mass., work continues on a $35 million municipal complex that will include a public works administrative facility and a combination police and fire department structure. (Town of Mansfield DPW photo)

In Mansfield, Mass., work continues on a $35 million municipal complex that will include a public works administrative facility and a combination police and fire department structure. Work will take place in two phases, with current construction focused on the Department of Public Works (DPW).

“The existing DPW building was built in 1957,” said Mike Ahern, DPW special projects manager. “No significant upgrades have been done, even though vehicle and equipment types have changed drastically over the years. The DPW facility lacks adequate ventilation, heating and drainage and office spaces are undersized and inefficient.”

Funded by municipal bonds, the project will include administrative headquarters for both police and fire, support areas, apparatus bays and fire department sleeping quarters. The public works building will allow for maintenance, repair and garage facilities to support operations.

“Interior storage of DPW equipment will extend the life of the equipment by 20 percent, and require less costly maintenance,” said Ahern. “The new complex will more effectively serve the town.

“The current fire station was built in 1930, and population growth has increased significantly in East Mansfield, which has led to increased response times. Fire apparatus size has increased to the point that new apparatus must be custom built to meet the physical constraints of the North Main Street Station.”

“These will be state-of-the-art buildings that will last the town many years,” said Ahern. “The municipal complex will be a campus-style environment to better serve the public relating to these departments.”

The new municipal complex site currently is home to the existing DPW and water treatment facility, which are two separate buildings. The new DPW building is being built on the rear of the existing site, which will make way for the new public safety building that will replace the old DPW building in the front of the site. The existing police facility is located 1.4 mi. from the new site, and the fire station is roughly the same distance.

“All the employees and town staff who will work in this complex are extremely excited about the new facility, as it will contribute to faster response times for police and fire, and increased efficiency overall,” said Ahern. “This will better serve the town and its residents. The majority of town residents approved the voter referendum to fund the construction of this project.”

The general contractor is Boston Building & Bridge Corp. from Milton, Mass. Kaestle Boos Associates is the lead architect for the complete project and partnered with Weston and Sampson Engineers for the DPW aspect of the endeavor. Both firms are located in Foxboro, Mass.

The contractor officially started its work November 2016. Barring any unforeseen developments, Phase I construction should be substantially complete by November of next year. The Phase I work includes offices for the highway division and public buildings/special projects divisions.

In January 2018 the existing DPW building will be relocated to the new facility at the rear of the site. This will make way for the demolition of the existing structure and the start of the new public safety complex.

Said Ahern, “Presently, all the work for Phase I is under way, with foundations and major site work completed. The building erection crew is starting to erect the building presently. Many tasks have already been completed, such as foundations, underground infrastructure and utilities. No major issues have been encountered to date.

“Key tasks remaining are the erection of the pre-manufactured steel building for the DPW site in Phase I, and completing on schedule in order to start Phase II.”

Heavy machinery on site includes general construction and earth moving equipment. The basic materials being used on the project are asphalt, concrete, metal, steel and gravel.

“In the initial self-preformed phase, we moved about 150,000 cubic yards of various materials to prepare the site while final design and bidding was being completed. During the Phase I portion of the site, the general contractor moved in the range of 10,000 cubic yards.

“Our biggest challenge was getting the project within budget for a phased project of this scope and magnitude,” said Ahern, noting that even before a contractor was selected, vast amounts of ledge in the front area of the site had to be removed for installation of utilities, and to reach required finish elevations.”

As part of their work, crews had to drill before blasting could occur.

“After blasting, we removed truckloads of rock. We then installed gravel in multiple controlled lifts with compaction to fill the blasted areas. Our thoughts were that any site work that could be accomplished in advance of bidding would be a time saver for the schedule, and the town would see the benefits of lower costs to self-manage this work in advance.”

The estimated amount of rock crushed on site as part of Phase I was 3,000 cu. yds.

“During Phase I work, we encountered some additional rock and ledge that was hammered in place and removed,” said Ahern. “Numerous large boulders were crushed and reused on the site as dense graded base.”

To date, there has been very little demolition work associated with Phase I, but Phase II will include tearing down the existing DPW building, which involves dealing with normal asbestos and related items for the time period of original construction. The items will be remediated prior to demolition operations.

Presently, the site is served by municipal sewer services and all drainage will remain on site through various underground and above ground detention basins. Recently, crews poured the building slabs of the DPW facility, and concrete pumping and concrete placement was performed by Marguerite Concrete from Hopedale, Mass. The two placements totaled 1,100 cu. yds.

According to Kaestle Boos Associates architect Greg Joynt, “Above all else, the town of Mansfield determined the need to provide code-compliant facilities which support the operations of modern municipal and public safety departments, which the existing facilities do not. In selecting a location for the new facilities, the vision expanded to creating a unified municipal campus, with the public works, public safety and existing water department headquarters all located in one area.

“As with any public building project, communication between all parties involved with the project is essential. This project included balancing the needs of three separate departments, as well as the water department and the building committee, while also coordinating multiple designers and construction schedules. This is usually done well with constant communication and regular coordination among all team members.”

Joynt said the difference between designing a municipal complex and a more traditional project is the programmatic needs of each department.

“The buildings designed to house large equipment, fire apparatus and police detainees all have different requirements which must be met, but are not normally seen in a more traditional building. In addition, security requirements are much more stringent with both active and passive methods of security integrated into the design.”

For the creative team, the primary concern was providing for user safety and comfort. Being environmentally responsible also was important.

“While the new Mansfield Public Safety/Municipal Complex does not meet one specific set of sustainable requirements, there will be numerous green features incorporated into the buildings, including low-flow water fixtures which will reduce water usage often by as much as 30 percent,” he said.

Additional features will include increased daylighting wherever possible, walk-off mats which remove contaminants from staff and visitor shoes, use of materials with recycled content, non-VOC emitting paints, finishes and sealants which improves air quality and high-efficiency HVAC and electrical systems (including LED light fixtures), which reduce energy usage. Green initiatives also were incorporated on the sites, including the use of native plants that may not need as much irrigation, resulting in reduced water usage.

“We would like these buildings to be community-friendly and welcoming, while still maintaining that sense of municipal permanence. We would like employees and visitors to feel a sense of pride with these buildings as they will be modern municipal buildings which will help each department operate even more efficiently and effectively for the town of Mansfield.”

Michael Trowbridge, chairman of the Mansfield Board of Selectmen, added, “Like all towns and cities, updating infrastructure for the growing population and needs is important. Based on the existing facilities, it should be a welcome change. Modern facilities for the employees will allow for more efficient work product for the citizens, and quicker safety responses.”

Trowbridge said the community will be better served by the new complex, adding that residents were well aware of the proposed project.

“There were a great deal of meetings, and information was placed out prior to the vote, informing them of all the pros and cons.”

A groundbreaking for the new complex was held last November, with a variety of officials taking part in the ceremony. Witnessing the first ceremonial shovels of dirt being turned was extremely rewarding for all in attendance.

“I am the longest-serving member of Mansfield Capital Improvements — 20 years — and this has been talked about for approximately seven years,” said Trowbridge. “It was nice to get it actually moving. We have an incredible municipal building committee made up of talented, dedicated professionals. The project will be done correctly, and under budget.”

One feature of the new complex should be of particular interest to all who stop by.

“A refurbished bell will be in the joining section of the police and fire, and it has a long history.”

The bell, forged at a foundry owned by Paul Revere's grandson, arrived in Mansfield in 1831, weighing an estimated 1,250 lbs. It was placed in Mansfield's Congregational Church. On the front was the inscription in all caps that read, “Revere Boston 1827. Presented by Asa Clapp, Esq of Portland in testimony of his early and continued affection for his native town of Mansfield.”

In 2015, workers removed the bronze bell from the belfry of another church, where it had been placed. The bell was kept in a town storage area until a year ago, when it was transported with a crane and a flatbed truck to a brass refinishing shop. When installed in the new complex, it will be illuminated inside and will reportedly be visible from as far away as Route 106.