Many Philadelphia Area Bridges Are Crumbling, Should Drivers Be Worried? 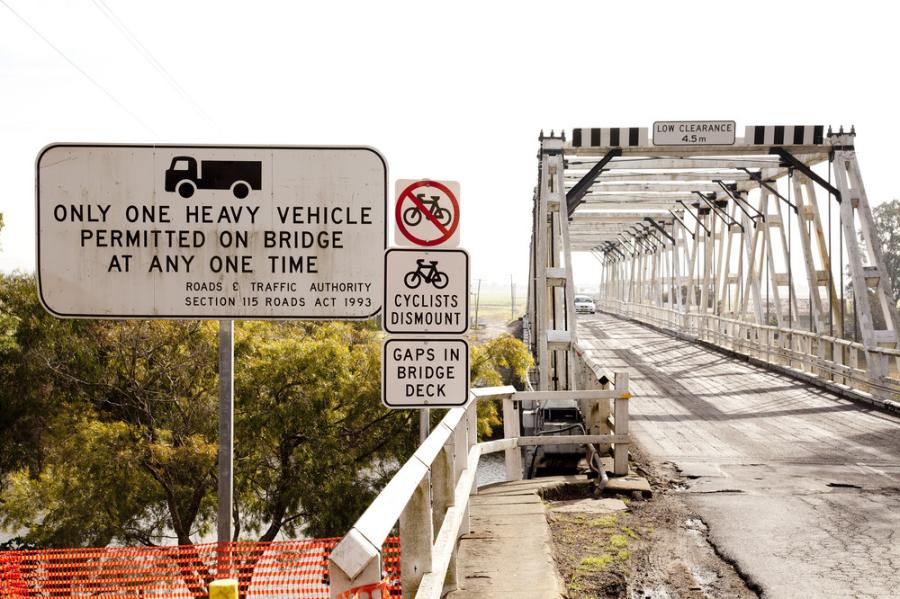 Steve Bartkovich used his practiced eye to scan the underbelly of the Dannehower Bridge carrying U.S. Highway 202 over the Schuylkill River in suburban Philadelphia to evaluate the rust splotches on steel girders and check for signs of crumbling concrete.

The bridge inspector, a Pennsylvania Department of Transportation (PennDOT) civil engineer for 13 years, was at the site to check on the steel substructure of the bridge specifically to see how some earlier repairs were holding up.

Most people don't think about steel fatigue or the corrosive power of road salt and water during the few moments it takes to drive across a bridge like the Dannehower, trusting that PennDOT has people like Bartkovich to do it for them, while also keeping a close watch to prevent bridge failures.

On Jan. 28, the stakes became frightfully clear in Pittsburgh as the steel-frame Fern Hollow Bridge carrying Forbes Avenue snapped and fell about 150 ft. into a creek in that city's Frick Park. It collapsed with a thunderclap and a roar that lasted a full minute, as captured by doorbell cameras in the nearby Regent Square neighborhood.

Several cars plunged into a gorge, and an articulated transit bus dangled on the broken bridge deck. Nobody died, but 10 people were injured. The National Transportation Safety Board (NTSB) is investigating the colossal failure.

And yet the Fern Hollow Bridge was not considered especially dangerous, despite its condition being rated "poor" — the same as 512 other roadway bridges in the region with average traffic of 100 or more vehicles a day, according to an in-depth Philadelphia Inquirer analysis of federal data.

That equates to about 13 percent of the 3,901 bridges in Philadelphia and its surrounding seven counties (including those in New Jersey) that carry cars or trucks, according to the Federal Highway Administration's (FHA) National Bridge Inventory for 2021, based on inspections performed every 24 months by state transportation departments.

A "poor" tag does not mean that a bridge is about to collapse but that at least one of its three primary components — the superstructure, the deck and the substructure (or culvert) — has shown signs of deterioration serious enough to warrant closer scrutiny or repair.

"Similar to evaluating a person's overall health, a bridge condition is just far too complex to really be fully described with three condition ratings," explained Melissa Batula, the acting executive deputy secretary of PennDOT, in speaking to the Philadelphia newspaper.

It is not clear how many times bridges have collapsed in the United States, but it is rare, especially given how much wear they take from the weather and modern traffic. The NTSB has investigated at least 16 serious highway bridge collapses since 1967.

Approximately 178 million daily trips are taken across the nation's 46,154 structurally deficient bridges rated in poor condition, according to the 2021 infrastructure report card by the American Society of Civil Engineers (ASCE).

Pennsylvania has the second most poor-rated bridges in the nation based on 2020 data.

PennDOT said it has reduced the inventory of state-owned poor bridges by more than half since 2008, from 6,034 to 2,433, after the state prioritized tackling bridge maintenance, and a 2013 increase in the wholesale fuels tax pushed by former Gov. Tom Corbett helped fund repairs.

Now the federal government is showering states with $26.5 billion for bridge repairs over the next five years, from which Pennsylvania is to get $1.6 billion and New Jersey $1.1 billion.

Transportation Secretary Pete Buttigieg announced the new funding on Jan. 14 in Philadelphia, while standing before the rusting span that carries Martin Luther King Jr. Drive over the Schuylkill. The bridge is closed to vehicles due to the deterioration, but cyclists, runners and walkers still flock to the crossing.

Under the new policy, federal money will cover 100 percent of the cost for work on spans owned by counties, towns and cities — but just 80 percent of costs for bridge projects on interstates and designated federal highways.

What Does a ‘Poor' Rating Mean?

Though bridge conditions are public records, they are not designed as an early warning system for drivers.

Rather, PennDOT's Batula told the Inquirer in a recent interview that the system is meant to "generally categorize" the safety of bridges and "provide a global view" to help officials identify priorities and schedule patches, improvements and replacement projects.

She said there are gradations of "poor," though, based on the severity of wear or damage to the critical structures of a bridge.

To make those determinations, inspectors like Bartkovich rate each component on a scale of 0 to 9 against a detailed set of engineering standards. Four or below equals poor; the lower the number, the sooner repairs are needed. Engineers use the worst single rating to decide a bridge's overall score.

Of the bridges in poor condition within the Philadelphia region, 40 are now closed, with most awaiting repairs, and 206 have some type of safety restriction, such as vehicle weight limits, the Inquirer learned from checking the federal database.

Almost 265 area bridges had a lower numerical score than the now-crumpled Fern Hollow Bridge on Pittsburgh's east side. It was used by about 14,500 vehicles a day and was considered safe.

Inspectors on the Job

PennDOT takes steps to protect weaker bridges, said Mike Keiser, acting deputy secretary for highway administration at the transportation department. Besides weight limits, he said it runs a permit program that tracks truckers with heavy or oversize loads and routes them away from potential trouble.

After Tropical Storm Ida caused serious flooding in the Philadelphia area last year, PennDOT inspectors fanned out for emergency checks of hundreds of "scour critical" bridges prone to erosion beneath their foundations. Rushing floodwaters and debris can make the problem worse.

"The public should be very much assured that we're doing everything we can to make sure our infrastructure is safe," Keiser said.

In the system of triage bridge engineers use, the 54-year-old Dannehower Bridge connecting Norristown and Bridgeport is not yet a problem. The span is rated in fair condition but is monitored closely because it had minor cracks in some steel deck supports during a scheduled inspection, which have since been repaired and appear to be holding up well, the Philadelphia newspaper reported.

"This one is in pretty good shape," Bartkovich said on a recent visit to the bridge with an Inquirer reporter. "Hopefully, we don't have to do any major rehabs anytime soon."

A lot of information is visible to a trained bridge engineer when doing an inspection, he said: Inspectors look for "spalling," or crumbling of concrete that can indicate or lead to structural failure; cracks in steel; places where steel is bent out of alignment; and settlement around foundation structures.

If there is uncertainty, inspectors can conduct "nondestructive" tests by banging a hammer or dragging chain on deck concrete to find hollow-sounding pockets. In addition, they can use penetrating dye and magnetic particle tests to outline steel cracks. In some cases, they even deploy a robotic device called a RABIT that scans a bridge's deck with ground-penetrating radar to generate a high-resolution map of flaws.

At least eight poorly rated bridges on Interstate 95 soar over Philadelphia arteries, though some have since been refurbished as part of ongoing construction and their ratings may have changed. Spans crossing Tacony, Fraley and Comly streets average more than 200,000 vehicles a day.

Since the freeway is elevated, thousands of hurried motorists do not notice most fixes — or on many other bridges, for that matter.

One mile west of I-95, for example, more than 40,000 cars and trucks a day rumble over a steel-girder bridge on U.S. 322 in Upper Chichester Township in Delaware County. Built in 1949, it passes over CSX Railroad tracks and received scores of 3 (with 9 being best) for the condition of both its deck and substructure.

One of the 94 Philadelphia bridges in poor condition, the 20-ft. stone masonry arch over Wissahickon Creek on Valley Green Road, was rebuilt in 1915 and averages about 100 vehicles a day, a possible undercount because the data was last collected in 1982.

The bridge is rated poor because of scour, or erosion below the waterline, on the east abutment, city officials said. It is still safe but has a five-ton vehicle weight limit to help extend its life.

"These [old] bridges were not designed to handle the size and weight of vehicles on the road today, and even when in good shape are ‘functionally obsolete,'" noted Keisha McCarty-Skelton, a spokesperson of Philadelphia's Department of Streets.

The Inquirer's analysis of the federal data on spans in the region found:

One caveat to the newspaper's findings: The data are based on information each state submitted to the FHA in 2021, so the status of some bridges may have changed.

Ivan Bertoli, an associate engineering professor at Drexel University, and Marcello Balduccini, a computer scientist at St. Joseph's University, are working to push the boundaries of how to detect bridge problems.

With a federal research grant, they are developing a system capable of wirelessly monitoring bridges — much as a fitness tracker on a person's wrist can measure health indicators — and to use artificial intelligence (AI) to analyze reams of readings.

"A bridge is always moving, even if the motion is tiny," he told the Philadelphia news source.

Wired sensors are used on a small percentage of bridges, but they are not as flexible and cost more. The idea is to give human bridge engineers a dynamic new tool that would make risk assessments more precise "and allow you to prioritize where to invest infrastructure money," Bartoli added.

Once information is transmitted, it would be uploaded to the cloud, and then the machine-learning system the St. Joseph's team is designing would organize the data points, synchronizing them with one another as well as with time-stamped video, said Balduccini, director of the Haub Innovation Center in St. Joseph's business school.

Wireless bridge monitoring could help the country begin to catch up after decades of underinvestment, Bartoli explained.

"Infrastructure in general has the curse that it gets recognized only when something is wrong," he said. "People don't really think about it, unless, say, they can't get their Amazon package. Failures are rare, and that's due to the professionalism of the engineers at PennDOT and across the country."