The announcement of the Sunoco pipeline project leaks come shortly after leaks of the same lubricant halted the Rover Pipeline last week. 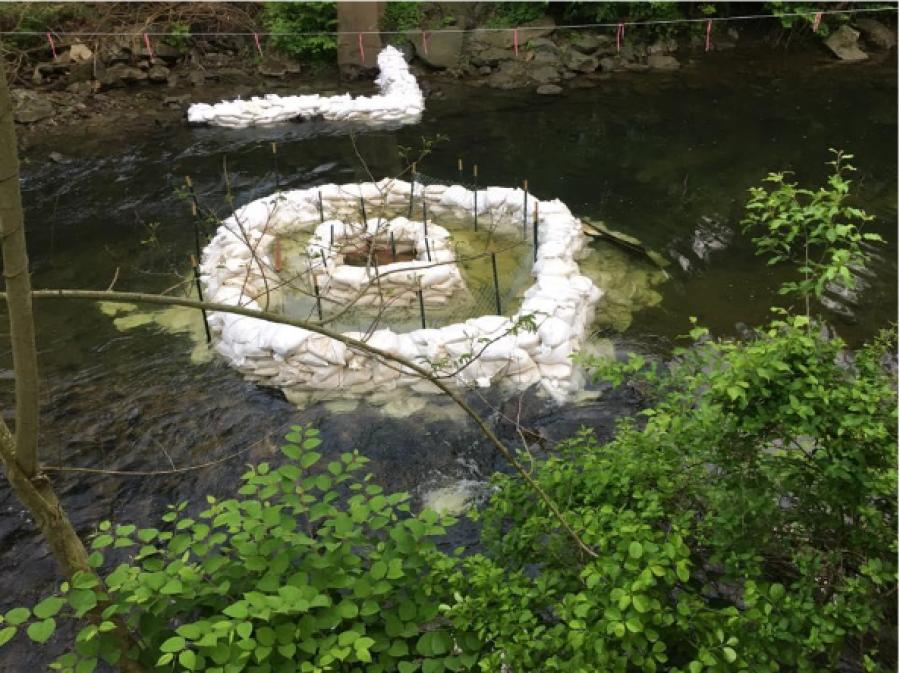 Sandbags are set up to control the leak. Image by area resident.

Nearly 600 gallons of bentonite clay has leaked into a local Delaware County creek according to a NPR investigation release on May 15. The announcement of the Sunoco pipeline project leaks come shortly after leaks of the same lubricant halted the Rover Pipeline last week.

Sunoco spokesman Jeff Shields stated that pipeline construction on the Mariner East 2 has led to three separate releases of the non-toxic substance into Chester Creek, which is located in Brookhaven, Pa.

Critics of the pipeline claim that the amount of the clay leaked can have adverse effects on the local marine life, especially those organisms that reside at the bottoms of streams and wetlands. This is backed up by scientists who state that although the clay is a common product found in cat litter, cloudiness in water outlets for extended periods of time can choke off aquatic plant and animal life affecting the health of the local ecosystem in the end.

The Pennsylvania Department of Environmental Protection did outline plans for such incidents under the term of “inadvertent returns.” According to this report, a contingency plan that includes “methodologies to control and minimize the impacts of sensitive environmental resources from inadvertent returns (IR) of drilling fluids associated with the proposed horizontal directional drill (HDD)” is in place and includes special regards for the bog turtle, a local breed of turtle that is on the endangered species list.

The NPR report states that an inspector from DEP visited the site on May 4 after the 500-gallon leak was reported and had stated that the company had the spill under control and was in the process of cleaning it up. By the 10th, the company had reported that another 75 gallons that had leaked and that too was being controlled and cleaned up.

Monitoring the mud drilling is the responsibility of the HDD contractor according to state's report as a list of requirements is set out for them to follow. Environmental and geological inspection are to be provided by Sunoco Pipeline L.P. In this case, if an inadvertent return is observed, the HDD contractor is expected to take measures to eliminate, reduce, or control the return.

In the case of the Rover pipeline leak in Ohio the state EPA fined the group $431,000 and shut down the project after 200 million gallons of the bentonite clay was leaked into a local wetland area. If the leaks continue, the Mariner East 2 may find itself in the same sticky situation.—CEG