Howard County Executive Calvin Ball announced May 24 in a press release that the county has secured a low-interest loan to build a 5,000-ft.-long tunnel that will divert water away from Ellicott City's Main Street and into the nearby Patapsco River.

The county has signed a $75 million Water Infrastructure Finance and Innovation Act (WIFIA) Loan with the U.S. Environmental Protection Agency (EPA) to pay for the tunnel. Known as the Extended North Tunnel, it is part of the largest and most impactful flood mitigation component of the Ellicott City Safe and Sound plan.

WTOP Radio in Washington, D.C., reported that Howard County public works officials said they expect to complete design of the tunnel this year, after which construction is slated to start as soon as possible.

Ellicott City lies just west of Baltimore within the valley of both the Tiber and Patapsco rivers.

Founded in 1772, the former mill town's hilly topography has made it perpetually prone to flooding. Ellicott City has endured 16 major floods since 1817, including the most recent devastating deluges in 2016 and 2018 that killed a total of five people.

Ball noted that the 18-ft.-diameter tunnel, which can carry enough water to fill a swimming pool every second, "will have the capacity of carrying approximately 26,000 gallons of stormwater per second away from the streets and foundations" in Old Ellicott City and the West End and directly into the Patapsco River

Running parallel to Main Street, the tunnel will be, at points, up to 100 ft. below ground level.

"It will be one of the most important, impactful and transformational projects that the public works [department] has done in the history of Howard County," he added.

Since taking office, Ball has committed more than $160 million in local, state and federal funds to protect Ellicott City.

When he announced the flood protection effort in May 2019, the county executive said that it would include razing four buildings on lower Main Street in the town, according to WTOP. An earlier plan would have called for the destruction of 10 buildings to widen the channel that carries water toward the Patapsco River during heavy rains.

Howard County noted that it has already broken ground on two other major flood mitigation projects — the H7 and Quaker Mill ponds. Both projects are expected to be completed in the next year and combined, will retain nearly 7.5 million gal. of storm water — about the size of a football field covered by 23 ft. of water.

Emergency sirens were installed in 2019 to provide warning to residents and business owners of flash flood warnings. After a July 2019 incident, in which the sirens failed to sound, the county and National Weather Service implemented a new protocol to differentiate "Historic Ellicott City" from the more widespread city, WTOP reported.

When Ball took office just months after the last three deadly floods, in 2011, 2016 and 2018, the tunnel project had been rejected by the previous county administration after citing its complexity and cost. But he said he tasked his team with developing a comprehensive solution for Ellicott City flood control that looked for creative funding solutions.

Components of the Ellicott City Safe and Sound Plan include:

"This community has seen the challenges of climate change, and issues like flooding are happening across the country," said the EPA assistant administrator for Water Radhika Fox in the Howard County press release about the tunnel project. "The WIFIA program, which is one of the most effective financing programs we have at the EPA, will continue the excellent work that is happening here in Ellicott City."

She added that the tunnel construction would "create about 900 jobs right here in the county."

"This is not your average infrastructure project, [rather] it is part of a comprehensive solution to save a historic mill town from the impacts of severe flooding caused by climate change," said Fry Hester.

"Delegate Watson and I have brought home approximately $40 million to implement the Safe and Sound plan over the last four years. That includes $12 million for the North Tunnel, $2 million for the T1 pond and $1 million for the Maryland Avenue Culverts just this year." 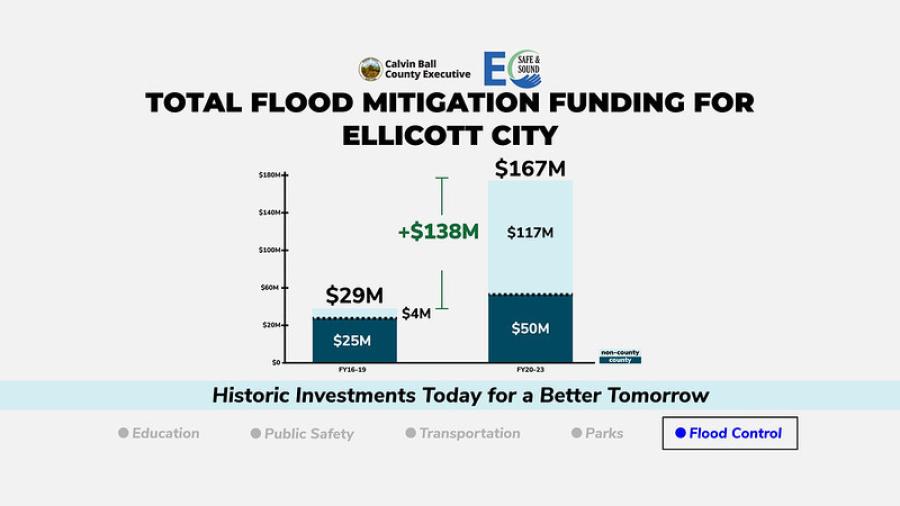