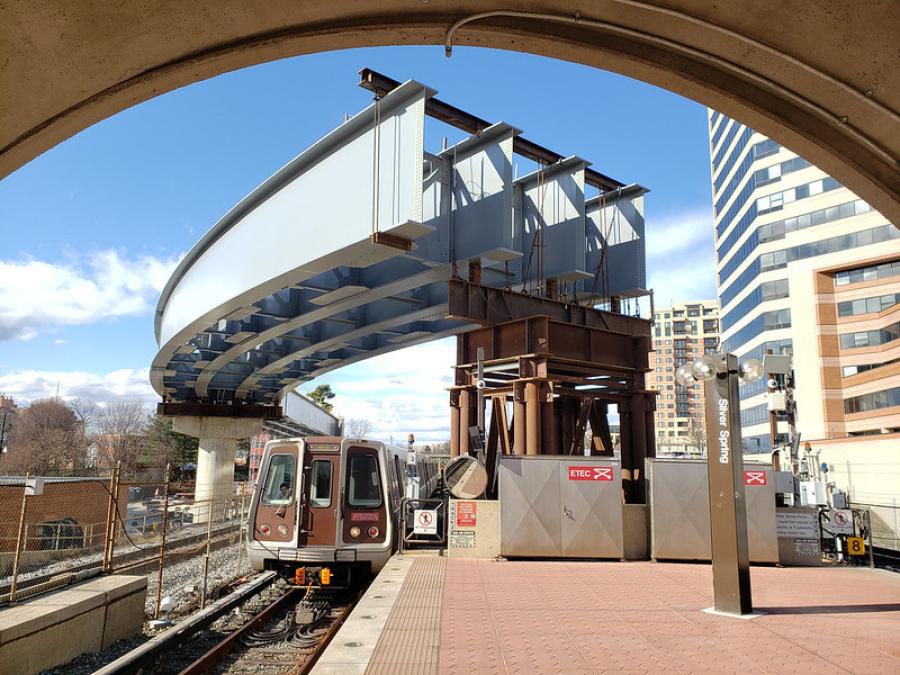 The Maryland Department of Transportation (MDOT) will pay an additional $250 million to salvage a 36-year partnership with the companies managing construction of the delayed Purple Line, state officials said Nov. 24.

The deal revives one of Gov. Larry Hogan's signature transportation projects and a public-private partnership that imploded in September following three years of cost disputes. The Purple Line is one of the first U.S. transit projects to rely on private financing.

"This agreement is a major step toward completing the Purple Line, a transformative project for our state and the region," Hogan said in a statement.

The settlement ends the state's and companies' lawsuits against each other and resolves what the firms had said were $800 million in cost overruns on the light-rail project between Montgomery and Prince George's counties, MDOT said.

The agreement, which followed months of negotiations, also means MDOT won't have to solicit a new long-term partnership, which would have taken far longer than the current plan to replace only the construction contractor.

Experts have said both sides would benefit from a deal. The state wants to keep construction moving and avoid having to find another way to finance the remaining $1 billion of construction work. The companies want to protect their reputations as they seek similar partnerships on infrastructure projects worldwide.

The lead Purple Line firm, Meridiam, also is competing as part of a team to build billions of dollars of toll lanes on the Capital Beltway and Interstate 270 via partnerships with MDOT.

The transportation department did not release details of the settlement, and agency spokesperson Erin Henson declined to say where the state would get the $250 million. She said more details will be released when the agreement goes to the state's Board of Public Works.

MDOT officials also did not say how much longer the line's opening is expected to be delayed. The private concessionaire previously had said the line would begin carrying passengers in late 2024. It initially was scheduled to open in March 2022.

Under the settlement, Texas-based Fluor will exit the line's development partnership, leaving infrastructure investors Meridiam and Star America as the remaining members of the consortium known as Purple Line Transit Partners (PLTP). Fluor had been the primary construction contractor but quit in September over delays and related cost escalations on the $2 billion project

Under the 2016 partnership, PLTP is helping to finance construction and manage it for six years. It will then operate and maintain the rail line for 30 years in exchange for state payments to cover those costs, pay off the private debt and make a profit.

Montgomery County Council member Tom Hucker, who chairs the panel's transportation committee, said MDOT officials told him it would take PLTP up to nine months to hire another construction contractor.

"I think, overall, it's going to be a relief to people," Hucker said of the settlement. "Both residents and businesses have just wanted some assurances that this enormously important project would continue."

Best of all, Hucker said, the additional $250 million is a fraction of the $800 million that PLTP had sought.

"Under the circumstances," he said, "I think this is the best outcome we could have hoped for to get the project back on track with a minimum of delays."

PLTP spokesperson John Undeland declined to comment on the settlement or a timeline for what happens next.

The $250 million appears to cover what PLTP and its Fluor-led construction team had said were additional costs stemming from a lawsuit filed by project opponents and the state lagging in providing right of way. Those two issues had been the closest to being part of a financial settlement late last year, project officials have said.

The other major cost overruns related to what the contractor had said was CSX Rail changing design requirements for a crash wall and the state changing requirements for environmental permits. Those were expected future costs that had continued to grow as both issues remained unresolved.

MDOT said just before Thanksgiving that it would seek to reduce delay risks for the next construction contractor by having the state complete the design, obtain permits and proceed with utility relocations along the 16-mi. alignment.

The state also will continue overseeing some subcontracts to keep other work moving until a new builder is on board, including paving, moving utility lines and manufacturing light-rail vehicles.

Gregory Sanders, vice president of the advocacy group Purple Line Now, said his organization has always hoped the state and PLTP would resolve their differences and keep their partnership intact.

"This is a great deal for Maryland taxpayers," Taveras said. "I'm glad we were able to settle this amicably and everyone can start fresh. I can't stress enough the level of urgency I see in getting the Purple Line done."