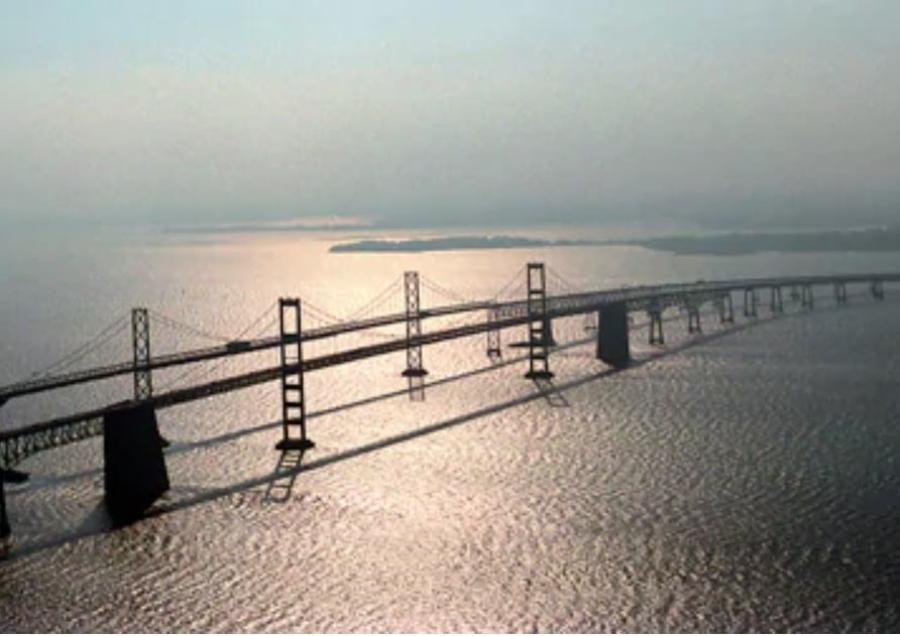 The Maryland Transportation Authority narrowed its focus to three alignments for building a third span at or near the Chesapeake Bay Bridge. (Michael Lutzky/The Washington Post photo)

Maryland transportation officials have rejected 11 of 14 potential sites for an additional Chesapeake Bay crossing, saying a new span must be built close to the existing bridge to provide the most traffic relief and cause less environmental damage, according to a state report released Sept. 1.

The report, part of a $5 million study by the Maryland Transportation Authority (MDTA) since 2016, makes clear that one option — building a third span adjacent to the two there now — is the leading contender of the remaining three. The other two would be within 2 mi. of the bridge, either to the north or south.

The current dual-span Chesapeake Bay Bridge crosses 4 mi. over the bay and transports traffic along U.S. Highway 50/301 between Crofton in Anne Arundel County and Queenstown in Queen Anne's County.

The option at the site of the existing bridge would relieve the most traffic congestion, provide the shortest alternate route in case of problems on the bridge, and is "more compatible with existing land use patterns," the report said, adding that because it would be the shortest span and tie into existing roads, it also would have fewer environmental impacts.

The prospect of another bay crossing bringing more traffic to Anne Arundel roads has drawn objections from local officials. They say U.S. 50 and side roads already become so swamped with bridge overflow traffic that residents often can't reach their homes or leave their neighborhoods.

Anne Arundel County Executive Steuart Pittman said the two remaining options north and south of the existing bridge would be "disastrous" for local communities where a new bridge would touch down. The destruction would include parkland and neighborhoods, he said.

Anne Arundel County Council member Amanda Fiedler, who represents the area near the existing bridge, said she believes the region needs another Chesapeake Bay crossing. However, she said, she's also worried that building one next to the existing bridge would further overwhelm local roads.

"We have to get traffic away from the same local roads that are already being impacted," Fiedler said. "It really cripples these communities."

The bridge study is a major endeavor by Maryland Gov. Larry Hogan, who has said building a third span is the "only serious way forward" to reducing bridge backups.

State officials say the bay needs another crossing span to keep pace with population growth, reduce congestion, make the crossings safer and provide an alternative when one of the spans is narrowed or closed because of a collision or disabled vehicle. Without an additional crossing, the state contends eastbound traffic congestion on summer weekends in 2040 would span 12 hours — two hours more than in 2017.

"This is a huge study for the Maryland Transportation Authority and the Hogan administration," MTA spokesman John Sales said. "We're focused on providing another crossing across the Chesapeake Bay, but this is only the first step."

Sales added the draft environmental impact study, which will identify the state's "preferred alternative," is scheduled to be released for public comment this fall. The final study is scheduled to be completed for federal approval in mid-2021, he said.

The latest report doesn't offer a detailed analysis of any of the remaining three alternatives' environmental impacts. However, the route near the existing span would affect the least amount of forest and "compares favorably" with the other options for the amount of farmland, open water, wetlands and streams affected.

It also doesn't include cost estimates but said any new crossing is "expected to be multiple billions of dollars." In addition, the report did not provide a timetable for construction or an indication as to how it would be paid for. The existing bridge is a toll facility.