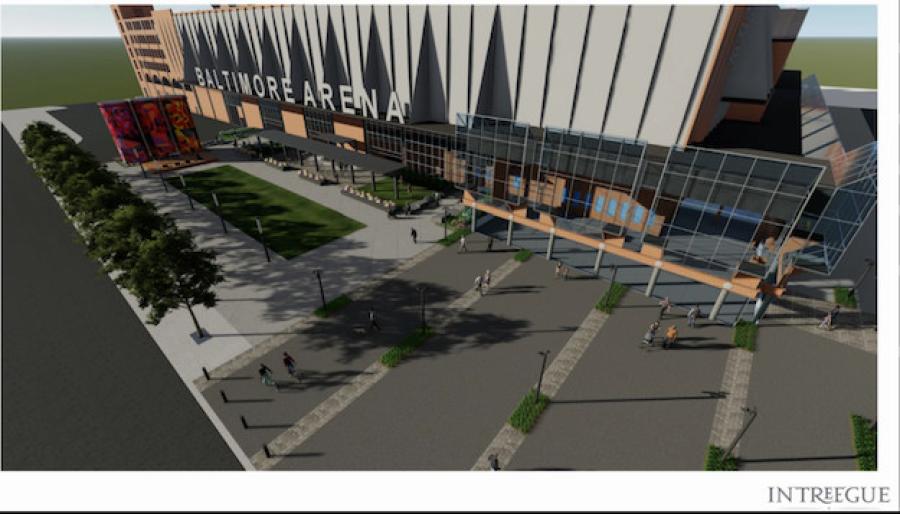 The 60-year-old Baltimore Arena is officially getting a face-lift.

Oak View Group (OVG) held a private groundbreaking ceremony June 9 at the city-owned arena — known as Royal Farms Arena until next February — in downtown Baltimore. The California-based development firm previously said it planned to spend $150 million to rehabilitate the aging arena, which currently has a capacity of more than 14,000 people.

Bethesda-based Clark Construction Group is the general contractor on the project. The company keeps an office at Stadium Square in South Baltimore.

The future looks bright for the arena, Baltimore's WMAR-TV reported, with more seating, better concessions and eventually a new name on the way for the facility once work is completed next winter.

Outside the arena, renderings show a sparkling new exterior shell, big and bold LED billboards, dazzling lighting and terraces from which to enjoy a warm summer evening.

The interior of the facility will feature a sophisticated new look with plush seating, dramatic concourses and a pushed backstage. Moving the stage will allow for more lower-level seating and overall seating will increase from 14,000 to 16,000.

A proposal also has been put forward to close Hopkins Plaza and create a new outdoor festival area.

OVG is partnering with Thirty-Five Ventures — an investment firm with ties to NBA basketball star Kevin Durant — to finance the upgrades. In return, they will lease the building for the next 30 years through an entity called Baltimore Arena Co.

The Baltimore Development Corp. issued a call for proposals to redevelop the arena in 2020, after city and state economic development leaders rejected a proposal to build a new arena at the site of the city's convention center, concluding that the undertaking would be too unrealistic and taxing, the Sun reported.

The newspaper recently requested the arena redevelopment bids from the Baltimore Development Corp.

Besides all the physical changes happening, more events also are headed to the Baltimore Arena.

In late May, the Central Intercollegiate Athletic Association (CIAA) announced that its men's and women's basketball tournaments will stay in Baltimore for at least another two years, through 2025.

The Sun reported Baltimore and the CIAA had agreed to a three-year contract in January 2019 for the tournaments in 2021, 2022 and 2023, but the first year's tournaments were canceled due to the coronavirus pandemic. Next season would have been Baltimore's final year before the conference considered another destination.

An economic impact report produced by the CIAA and Visit Baltimore last month showed the tournaments welcomed 36,390 unique attendees over 22 games that accounted for a direct spending impact of $13.9 million and a total economic impact of $19.6 million.

Meanwhile, naming rights for the arena are still up for grabs. That privilege is not inexpensive, though, as Royal Farms reportedly paid $250,000 a year to have its name on the building.