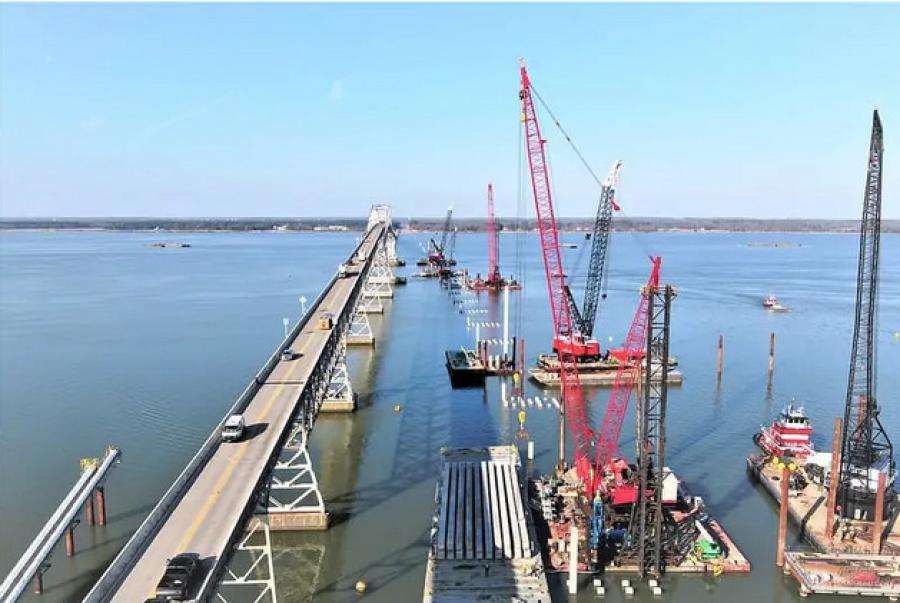 Form-placing is under way in this late-March photo at the new Nice/Middleton Bridge. (MDTA photo)

Southern Maryland's $463 million Nice/Middleton Bridge building project is moving right along, and because of the sensitive construction operations under way, the Maryland Transportation Authority (MDTA) has put new speed limits in place for Potomac River boaters.

Chesapeake Bay Magazine reported May 3 that a new six-knot speed limit is now being enforced for a half-nautical mile north and south of the new bridge, designed to connect southern Maryland and northeastern Virginia. It is methodically being built close to the existing bridge linking Charles County, Md., and King George County, Va.

In mid-February, construction crews began lifting and placing massive footing forms to build the new bridge's foundations. Weighing as much as 195 tons, the forms measure 30 ft. wide and up to 52 ft. long, according to engineers with the MDTA.

The 33 forms, known as "bathtubs," are being placed and sealed atop previously driven sets of piles that are up to 200 ft. long and weigh more than 200 tons. The state agency told the magazine that the piles are still being driven, a task that will continue until late this year.

The bathtubs are lifted into place by two high-capacity floating cranes and eventually will support the columns of the Nice/Middleton Bridge. MDTA described the bathtubs as part of an innovative forming method that reduces construction time and environmental impact from bridge-building. Form-placing work is expected to continue until the end of the summer.

Boaters cruising around the bridge site should also be prepared for brief restrictions in the navigational channel when the bathtubs closest to the river channel are placed. The U.S. Coast Guard can provide the timing of the closures on its multi-media outlets, the MDTA told the magazine.

MDTA also urges boaters to "use extreme caution in the area, steer clear of construction vessels, and slow down to ‘Make No Wake.'"

The new Nice/Middleton bridge is expected to be finished in early 2023. As for the old bridge, MDTA spokesperson John Sales told Chesapeake Bay Magazine that crews will work to safely dismantle the existing bridge.

Some of the materials will be used to create an artificial fish reef in local waterways. He noted that that's expected to occur in 2023 and 2024, with planning under way now for the final location of the anticipated reef site.

The new bridge will be a significant improvement over the old bridge in that it will:

Under MDTA's supervision, the design-build job is being performed by Skanska, Corman and McLean (SCM), a joint venture comprised of firms with local ties.