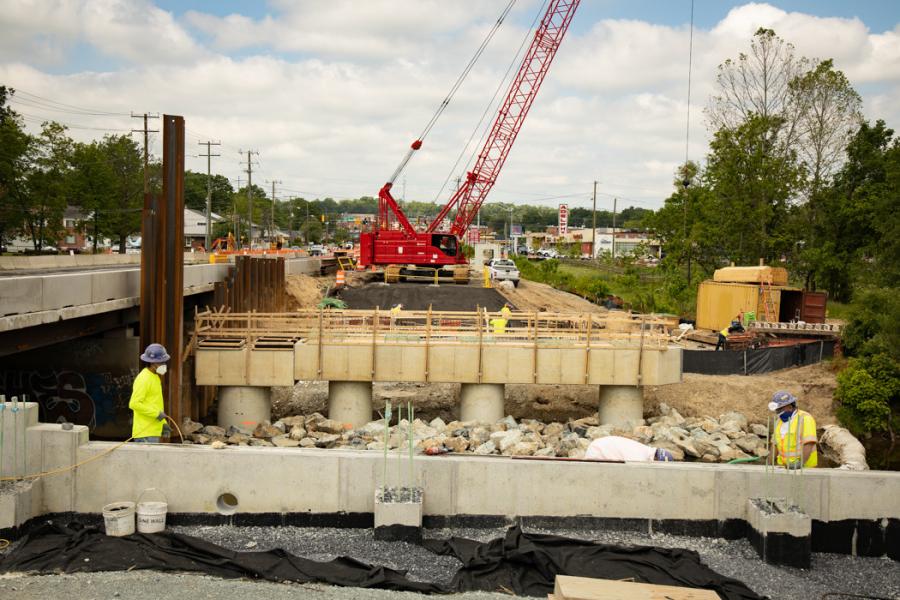 A $2.3 billion contract between the private consortium managing Maryland's Purple Line project and a new construction team to complete the long-awaited light-rail line has been signed, according to the consortium and the Maryland Transit Administration (MTA).

The deal went into effect April 14 and adds $1.46 billion to the Purple Line's construction costs — almost 75 percent more than the $1.97 billion the state initially budgeted, bringing the total to $3.4 billion. Approximately $1.1 billion of work was completed before the original contractor quit in fall 2020 after several years of cost disputes with the state.

By reaching "financial close" on the replacement construction contract, funding has been secured, the Washington Post reported, a significant milestone because it allows major work on the stalled 16-mi. project to likely resume this spring.

The Purple Line is designed to provide faster, more reliable east-west transit service than buses in older, auto-dependent suburbs and connect communities with Metro, Amtrak and the MARC commuter rail system. Local governments also are counting on its 21 stations to attract and focus economic development.

When finished, it will be the Washington region's first direct suburb-to-suburb rail line.

If all goes well during the building phase, the rail line between Bethesda in Montgomery County and New Carrollton in Prince George's County will begin carrying passengers in fall 2026 — more than four years behind schedule.

According to the Post, officials in Annapolis have attributed the escalating construction costs to changes in the project's "risk profile" and the pandemic's effects on insurance rates, labor shortages and materials.

"We are excited to start a new chapter and deliver the Purple Line to Maryland," said MTA Chief Holly Arnold. "There will be a noticeable increase in construction activity later this spring and summer as this critical project moves forward."

Many Parties Making the Purple Line a Reality

A joint venture known as Maryland Transit Solutions and led by the U.S. subsidiaries of Spanish construction firms Dragados and OHL will execute the construction deal.

In turn, those companies also have a contract with Purple Line Transit Partners (PLTP), the private concessionaire led by infrastructure investor Meridiam. As part of a broader public-private partnership, the consortium is managing the project for the state by constructing the Purple Line and helping to finance the build before operating and maintaining it for 30 years.

The new contractor has met "frequently" with Maryland transit officials and PLTP "to smoothly transition responsibilities and plan for the efficient mobilization of construction," PLTP said in a statement. To re-initiate the building effort, the contractor also has been adding staff in preparation.

The Maryland Department of Transportation (MDOT) also signed a new partnership agreement with the consortium to include the higher construction cost. In addition, more funds will be available to the consortium for related expenses, such as financing, insurance and operating the line long-term.

The value of the partnership agreement has grown from its original $5.6 billion to $9.3 billion.

"Our rock-solid partnership with MDOT MTA is the reason we're able to make today's announcement, which brings the Purple Line an important step closer to serving the people of Maryland," said PLTP Chairman Jane Garvey in her April 14 statement. "Leading up to today's milestone, ‘Team Purple Line' has spared no effort to ensure the restart of construction hits the ground running."

The Post reported Maryland officials have said the consortium will finance the increased construction costs. The state will pay back those costs with higher monthly payments — averaging about $255 million annually — over the 30 years. The consortium's new financing includes a $1.76 billion low-interest federal loan, which has grown from the original $875 million loan, $643 million in private activity bonds issued to PLTP, and $293 million of its own equity.

The project's delays and cost overruns have drawn national attention because its public-private partnership was one of the first for a U.S. transit line to rely on private financing. Many governments across the country are currently counting on similar partnerships to tap private investment in building transit, highways and other major infrastructure, the Washington-based news source reported.

Public Has Waited Decades for The Purple Line

The finalizing of the new construction contract is welcome news in Maryland's inner suburbs, where the original contractor's departure almost 22 years ago left behind hastily patched roads, partially built rail bridges and a string of mostly abandoned construction sites.

The state has paid for some work, such as to refine the design and move utility lines, to continue in the past 18 months, the Post noted. However, residents eager to ride the long-planned line have been unhappy over the delays, and local business owners say they are worried about surviving a longer period of lost parking and damaged roads.

The state has agreed to assume more financial risk for the construction, including for "any unknown defects" in the original contractor's work and any additional pandemic-related problems, Maryland officials have said.

The partnership agreement's dispute resolution process also has been streamlined, while other changes would make it more difficult to end for additional extended delays, state officials told the Post.