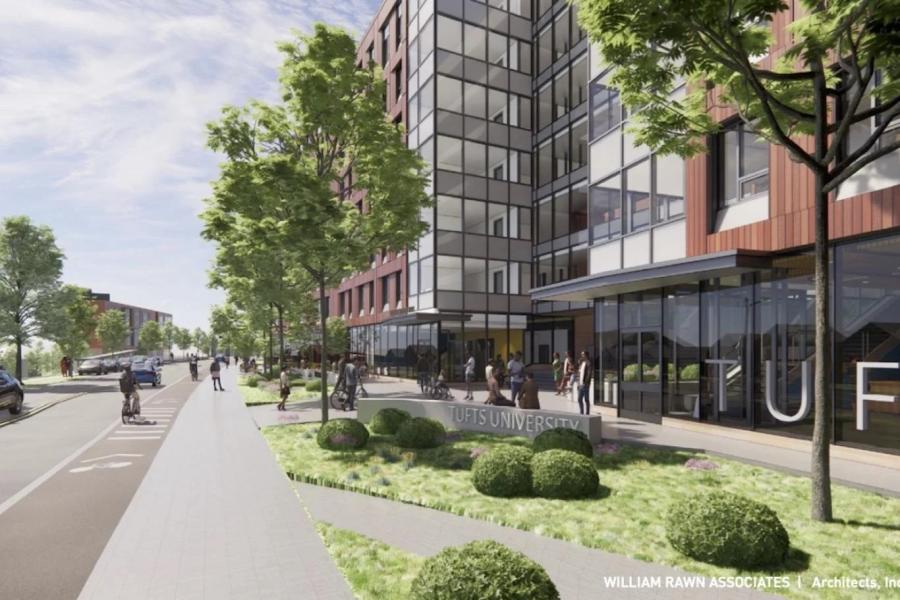 Tufts University, a prestigious college a few miles north of downtown Boston within the towns of Medford and Somerville, Mass., has begun planning for construction of an undergraduate residence hall for juniors and seniors on the campus.

The Boston Avenue building is expected to open in fall 2025, featuring apartment-style units and public access to its ground-floor retail space.

The residential hall also is to be built across the street from the new Medford/Tufts Massachusetts Bay Transportation Authority (MBTA) station, part of the Green Line Extension project currently nearing completion. The dormitory building will include an outdoor plaza and space for a first-floor retail operation, such as a café or restaurant, open to students and the public alike.

"In addition to building a beautiful, efficient new residence hall, we are taking this opportunity to energize the Boston Avenue streetscape," explained Rocco DiRico, executive director of government and community relations at Tufts. "Our objective is to create an inviting place on campus, not just for our students, but also for our neighbors who may be catching a train into Boston, and for our visitors who may be seeing Tufts for the first time."

He added that building the new hall will accomplish several shared goals.

"For years, Medford and Somerville have asked us to create more high-density on-campus housing to open up off-campus housing for local families," DiRico said. "We are doing that here by planning a residence hall for juniors and seniors who would otherwise have to rent apartments off campus."

The new project is not expected to increase the number of student-owned cars on campus, DiRico told Tufts Now.

"The majority of our on-campus students don't bring cars anyway, and with the arrival of the [transit station], we expect that the students in this new hall will love the convenience of the Green Line, located right across the street from where they live."

Tufts also is in discussion with the bike share system, BlueBikes, to sponsor two new stations within walking distance of the new residence hall, he added, and the MBTA will be making sidewalk, crosswalk and other pedestrian-related improvements once the Medford/Tufts station is finished.

Dormitory Designed to Reduce Its Carbon Use

Ruth Bennett, senior director of capital programs at Tufts, explained that the planned residential hall is part of the university's commitment to decarbonize the campus and build energy-efficient buildings. The structure will be designed and constructed to a low energy use intensity target and will connect to the college's highly efficient central energy plant for utilities, she added.

The building also will be solar-ready, Bennett said, meaning all the conduits and meters needed for a solar array will be installed during construction. Tufts will continue its work with solar developers to put solar panels on the roofs of as many buildings as possible, including the new residence hall.

It is part of Tufts' ongoing investment in new and improved infrastructure that advances the university's sustainability goals, including reaching carbon neutrality on the Medford/Somerville campus by 2050, she noted.

William Rawn Associates, a Boston architectural firm, is the design team behind the new building. The company has many other university residence halls in its portfolio, including buildings at Brown, Brandeis and Duke, as well as the Sophia Gordon Hall at Tufts.

The project's construction manager is DPR Construction, a global company with offices in Boston.

The new Boston Avenue residence hall grows out of a Tufts strategic plan to make significant capital improvements on its campus. In April 2021, the university completed a $250 million bond offering and earmarked a substantial portion of those monies for student housing.

The last time Tufts built a new on-campus dorm was in 2006. The opening of Sophia Gordon Hall, at 15 Talbot Ave., made 124 beds available for juniors and seniors. Apartment-style housing also can be found in the school's Latin Way and Hillsides dormitories, in addition to special-interest housing and rooms in the other residence halls at Tufts.

Over the past five years, the university has made considerable progress toward expanded on-campus housing, adding a total of 485 beds for undergraduates, DiRico told Tufts Now.

Those juniors and seniors preferring apartment-style units have found an appealing choice for on-campus housing in a recent initiative known as CoHo (short for Community Housing). For that project, Tufts renovated 13 wood-frame houses, and built one new fully electric, highly sustainable home, to create living space for 139 students. Tufts also plans to renovate two more houses that will expand CoHo capacity by next fall.

At 29 Sawyer Ave., in Somerville, the university is upgrading another residence hall that currently is home to students. When that work is complete, the building will house 26 third-and fourth-year students.

"Being able to have more juniors and seniors living on campus creates a more robust residential community," said Camille Lizarríbar, the university's dean of student affairs. "It increases opportunities for students at different stages of their Tufts experience to learn from and engage with each other, to forge close friendships, and to share memories that last a lifetime."

Construction this past summer also created housing for 150 first-year students in the area known as the Court at Professors Row. In addition, 24 students moved into a renovated former fraternity house this fall at 114 Professors Row.