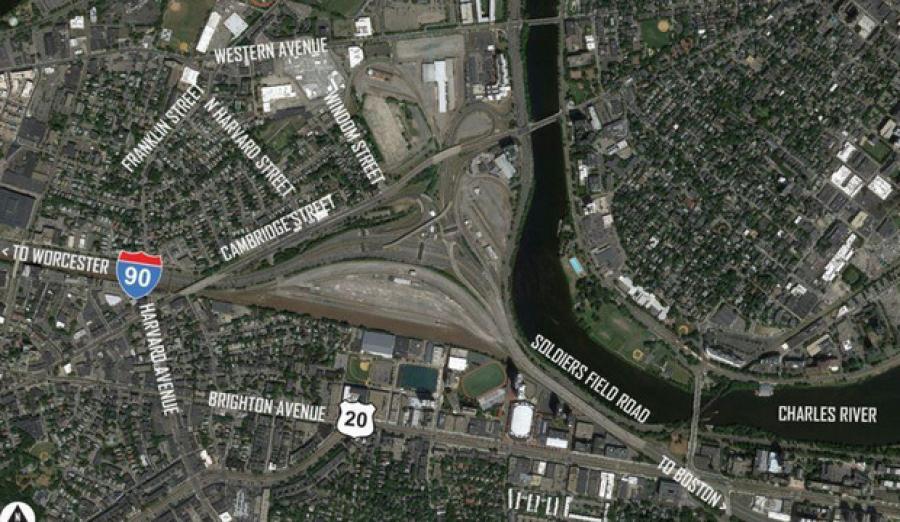 The I-90 Viaduct carries several lanes of highway traffic over Boston's Allston neighborhood into and out of downtown Boston. (MassDOT photo)

The Massachusetts Department of Transportation Board of Directors and the MBTA Fiscal Management and Control Board received an update regarding the status of the project to replace the deteriorated I-90 Viaduct which carries several lanes of highway traffic over Boston's Allston neighborhood into and out of downtown Boston.

After several years of collaboration with members of the community, and regular meetings of a task force intended to help identify goals and design elements for the project, MassDOT is currently analyzing financing options for this project and continuing to coordinate with key stakeholders.

The project is at approximately 15 percent design and the current schedule calls for the completion of the project's preliminary design in 2019 and then beginning the process to procure a contractor for this project. Construction work and related activities would then be expected to begin in 2020.

“The focus of MassDOT is moving the project forward now so the essential elements can be built to replace the deteriorated viaduct carrying the highway vehicles,” said Stephanie Pollack, transportation secretary and CEO. “With the highway viaduct replacement, there is an opportunity to do additional 'enhancements' to the interchange to benefit drivers on local roads, pedestrians and cyclists, but those 'enhancements' cannot be committed to until after a finance plan for the project is confirmed. Our conversations with stakeholders will continue to be valuable in the weeks and months ahead as the core project design elements are decided and as MassDOT engages local elected and civic leaders on work which can be included and which is outside of construction to replace the elevated highway.”

“The Allston Viaduct is a complex structure that impacts all modes of transportation throughout the area including vehicles traveling on I-90, local traffic, MBTA Commuter Rail, Amtrak trains, as well as those who are traveling by bicycles or by foot,” said Patricia Leavenworth, chief highway engineer. “The viaduct is structurally deficient and showing signs of deterioration and on a yearly basis, MassDOT spends on average $800,000 to maintain the viaduct. The time has come to move this project forward through the design phase so it can be rebuilt.”

The Allston Viaduct was constructed during the 1960s and is nearing the end of its useful lifespan and must be replaced to prevent the bridge from becoming more structurally deficient. MassDOT annually spends approximately $800,000 to maintain the Viaduct in usable condition.

The replacement of the Viaduct is an opportunity to reconfigure aspects of the Allston Interchange which dates to the 1965 extension of the Massachusetts Turnpike to downtown Boston, and offers opportunities, if affordable, to make multi-modal transportation enhancements to the local area.

At the MassDOT Board and Fiscal and Management Control Board meeting, three replacement options were discussed:

• Removing the Allston Viaduct and replacing it with an at-grade highway and building a railroad viaduct.

• Removing the Allston Viaduct and replacing it with an at-grade highway and keeping the railroad infrastructure at-grade.