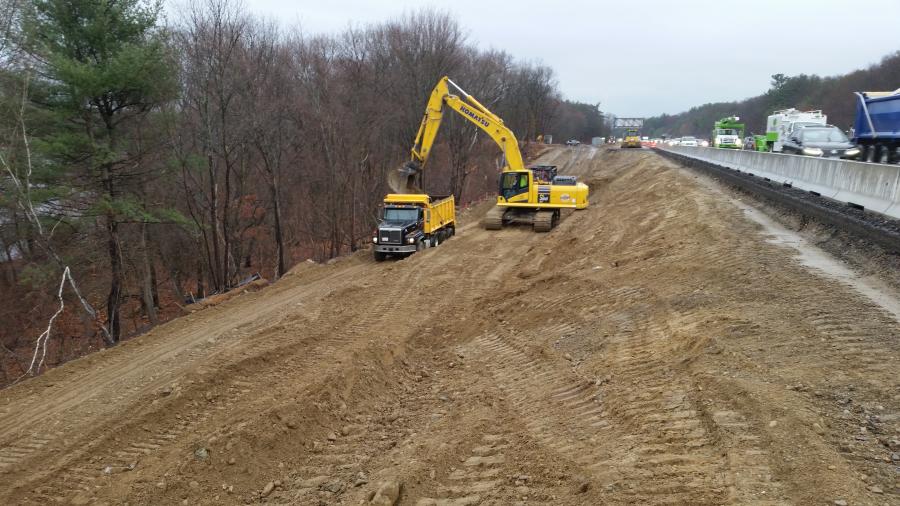 Barletta Heavy Division Inc. (BHD) is more than one-third through the construction of the Massachusetts Department of Transportation's (MassDOT) $137.6 million Needham-Wellesley I-95 Add-A-Lane project in Needham, a suburb of Boston.

Construction began in January 2015, and is expected to be complete by April 25, 2019. MassDOT established an interim milestone requiring a portion of the new Kendrick Street Interchange to be open to traffic on September 26, 2016.

The project has been split into five major stages to minimize impacts to the traveling public. Stage 1 included the following: the widening of the northern half of the Kendrick Street Bridge; building the Kendrick Street ramp bridge to I-95 northbound; starting construction of the new Highland Street Bridge; initial construction at the interchange of I-95 and Route 9; and the demolition of the railroad bridge over I-95.

“This project is the sixth and final contract to provide an additional travel lane and shoulder toward the median on I-95 from approximately Route 24 in Randolph to Route 9 in Wellesley,” stated the project Web page. “This widening includes restoring the breakdown lanes for their intended use. This sixth contract is a 3.8-mi. (6.1 km) segment of I-95 from just north of the Needham Branch railroad bridge in Needham to about 5,000 ft. (1,524 m) north of Route 9 in Wellesley.”

The overall project has witnessed the combination of the demolition of older infrastructure, upgrading of existing infrastructure, and building of new bridges and roads.

The project is installing four new ramps off Kendrick Street to service the industrial parks located there and to alleviate traffic on Highland Avenue.

MassDOT is shifting traffic for the demolition of the Route 128 bridge over Route 9. In the fall of 2016, the DOT expects the completion of the Kendrick Street Bridge. In the next two to three years, Route 128 over Route 9 bridges will be completed along with remaining Kendrick ramps.

Stage 2 work began several months ago and that often involves triple shifts. This is the case for work on Route 128. On Kendrick Street, day shifts are installing retaining walls and prepping the west abutment footing and excavating the Kendrick pier, and following this procedure, work will focus on prepping the Kendrick pier footing. The demolition of the existing Kendrick Street bridge deck will continue during the third shifts. At K1, work has begun on the installation of underdrainage and overhang brackets.

Stage 3 will see the beginning of load transfer mats at the Highland Avenue area median, Route 128 bridges over Route 9, Route 128 over Central Avenue shoulder widening; with Stage 4 work focusing on connector/distributer roads to the Kendrick and Highland Avenue interchanges, Highland Avenue wetlands replication, continuation of the outside roadway widening to connect to Route 9, and the start of the installation of the Cedar Street sound barrier. The final stage will complete the 95NB/SB median widening at Route 9 and sound barrier installation, and pave and stripe project-wide, and install permanent signs and ITS equipment.

“Managing the existing traffic flow during the daytime hours and the sensitive residential areas during nighttime activities,” said Mark Shamp, BHD's project manager. “We are constantly implementing additional traffic controls and noise mitigation components to attempt to limit major inconveniences to the traveling public and the resident s of the adjacent community.

We have found that the community outreach has proved invaluable,” he added. “MassDOT and Howard Stein Hudson have provided a conduit for the community to keep informed of the constant changes due to the phasing of the contract. After the historic snow from last winter, we have tried to maximize the time that we have during good weather. We have increased the amount of crews that we utilize to attempt to avoid a full shut down like last winter.”

“The biggest challenge has been keeping the existing bridges active during construction of the new larger structures,” said Shamp. “Each bridge is completed in phases so that traffic can continue to utilize the bridge while a new structure is being completed around it. It takes approximately one year per phase of bridge construction depending on the amount of utilities that need to be relocated, the amount of ledge encountered, and the size of the structure.

“You can reuse a large portion of the products on the project,” said Shamp, “including the existing topsoil, gravel, ledge, asphalt and concrete. The existing steel is scrapped and recycled for future use as well. MassDOT encourages the reuse of most of the materials on site limiting the amount of waste that the project produces.”

The amount of new construction materials that will be used is massive and still being determined as planning continues.

“Any work within the median requires on-time deliveries,” said Shamp, “which have to occur outside of peak travel hours on the highway. We utilize four yards to stockpile aggregates, materials, equipment and topsoil for daily use. These yards are located within the lobes of the Highland Avenue ramps as they are the only location on site that has a large enough footprint for these activities. We have a small onsite office for the superintendents and a small office in one of the adjacent business parks for the day-to-day management and administrative staff.”

With several work sites and individual and specialized crews, communications is key and the management team uses a variety of devices — smart phones, tablets, and computers — to share updates on work done, difficulties that arise, the need for mechanics, and the transfer of men and equipment to help out on specific items.

BHD's equipment yard is roughly 20 mi. (32 km) away in Roslindale and on this project, it has two onsite mechanics specifically assigned to it, in addition to the mechanics assigned to all of its projects that could be called in.

“Due to the size of the project,” said Shamp, “the amount of pieces of equipment changes daily, but it averages approximately 50 to 60 pieces on any given day between the excavators, bulldozers, loaders, backhoes, graders, screening equipment, etc. The equipment is being used around the clock, so the mechanics are constantly performing checks and repairs during the peak travel hours when we can't access the highway. The equipment primarily goes through hoses and normal service repairs.”