The future waterfront mega-development will include 2,700 units. 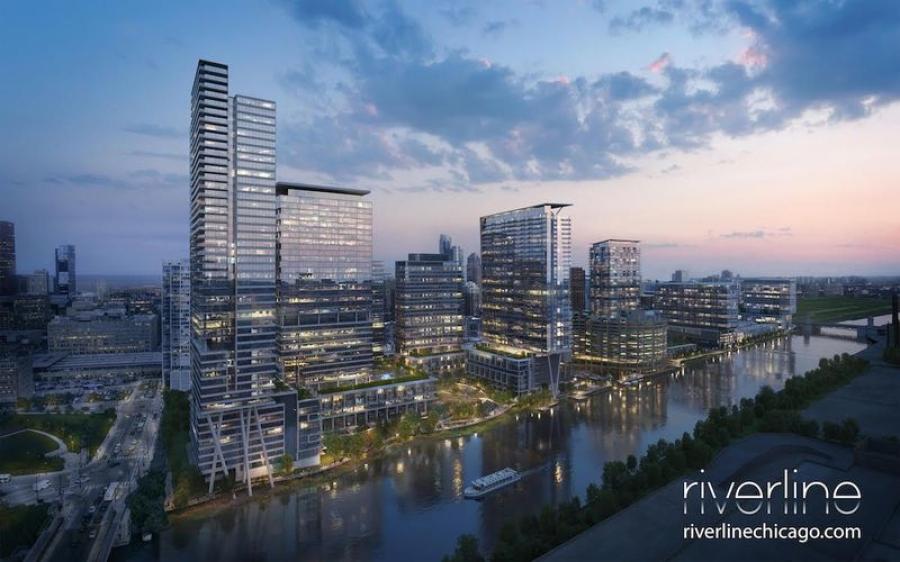 As approved last year, the transformative master plan calls for the phased construction of five mixed-use highrise buildings along the east bank of the Chicago River between Harrison and Roosevelt.

The website curbed Chicago is reporting that perhaps Chicago's most significant project in recent memory, the Riverline development is creeping towards reality as crews prepare the empty 7-acre site for future construction. As approved last year, the transformative master plan calls for the phased construction of five mixed-use highrise buildings along the east bank of the Chicago River between Harrison and Roosevelt. When completed, it will include 16,500 square feet of retail and 2,699 private dwellings spread across a collection of apartments, condo units, and townhomes.

With heavy equipment and fencing appearing on-site this weekend, work on the first piece of the complex Riverline jigsaw puzzle — a 30-story residential building slated for 726 S Wells — appears eminent. Internally dubbed "Building D," this first tower will include 452 residential units, some retail, and 230 parking stalls. The initial phase of the plan also calls for the construction of a new centrally-located park as well as a restored naturalistic shoreline and a publicly accessible riverwalk.

Designed by Chicago's Perkins+Will, Riverline is a joint venture between CMK Companies and Lend Lease. The pending development of the long-vacant site will see Bertrand Goldberg's vision for of a thriving neighborhood sprouting up next to his 1986 River City finally realized. Previously known as River South, the $1.5 billion Riverline project is expected to take ten yearsto complete. It will join a number of active South Loop projects including a new 33-storyresidential tower headed to Polk and Financial just one block east.