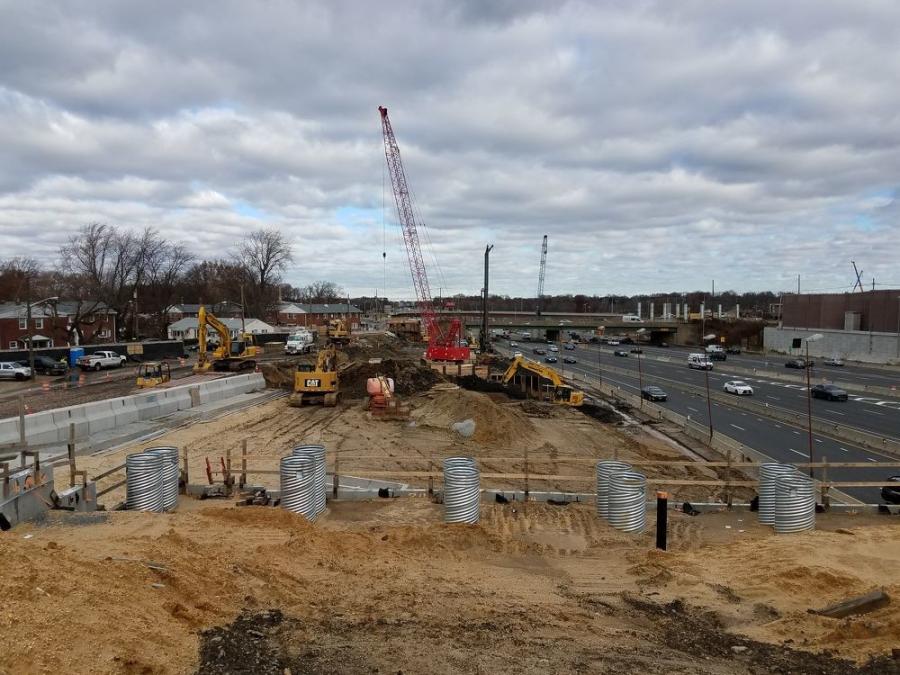 Looking north at work to build new lanes for I-295 SB. Route 42 is on right side. The new Browning Road bridge is the higher span in the background.

Motorists that have long had to endure mind-numbing traffic delays as they pass through a multi-highway interchange near Camden, N.J., are now witnessing a noticeable difference along the major roadway system.

To alleviate the gridlock, NJDOT awarded the first of four separate construction contracts in March 2013 to reconfigure and improve the I-295/I-76/NJ Route 42 intersections in the townships of Bellmawr, Mt. Ephraim and Gloucester City, across the Delaware River from Philadelphia.

Known locally as the Direct Connection, the $900 million undertaking should improve safety and reduce traffic congestion at the interchange of the three major roadways. The tangle of highways, bridges and ramps is one of New Jersey's most bottlenecked and accident-prone corridors as more than 250,000 vehicles a day travel over its road surfaces.

The logjam of cars and trucks in and around the interchange is obvious when one considers the highways that feed into it. New Jersey's I-295 is a bypass route around Philadelphia for I-95 traffic between New York and Baltimore. South of Camden, it intersects with I-76, a major commuter route from Philly across the river into the Garden State. At I-76's terminus, both interstates connect with Route 42, itself a main carrier to the popular south Jersey shore and to the Atlantic City Expressway.

Hopefully, regular commuters and truck drivers that pass through the interchange have learned the virtue of patience. Seven years into the work, the construction is today at its halfway point, with an expectation it will be finished in 2027.

At that time, motorists will be rewarded with a distinct and continuously flowing I-295 traffic pattern through the interchanges with the other two highways, according to Steve Schapiro, deputy manager of Communications of NJDOT. 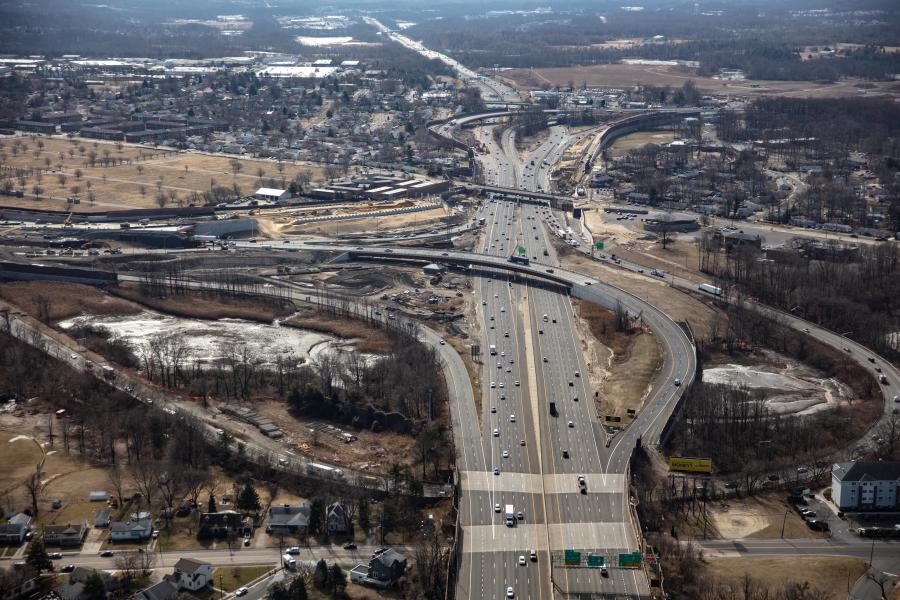 "As there has not been a direct connection for I-295 thru-traffic in the area, the existing interchange requires motorists to slow down in both directions of I-295 to safely negotiate ramps with 35 mph speed limits," he said.

A dangerous bend in southbound I-295, known locally as the "Al-Jo Curve," is also being eliminated. The bend got its name from a popular 1960s South Jersey club in Mt. Ephraim that had a prominent billboard erected along the curve for years before the Club Al-Jo closed its doors.

As conceived, the project's plans called for construction crews to build a new bridge to serve as the I-295 mainline direct connection over I-76/Route 42, in addition to improving several ramps and reconstructing several other local bridges over I-295 and Route 42. These upgrades were designed to make it safer for interstate drivers contending with vehicles entering from Route 42 and from I-76, interactions that often necessitate dangerous weaving movements.

The massive size and complexity of the project were the reasons NJDOT preferred to divide the Direct Connection venture among a quartet of contracts, Schapiro explained.

The first contract in 2013 was awarded to PKF Mark III Inc. in Newtown, Pa., north of Philadelphia.

Formed over 50 years ago to work primarily in the highway and bridge construction market in the region, PKF later strengthened its infrastructure capabilities by distinguishing itself as a premier contractor known for its skill at engineering, bidding, construction and project management. 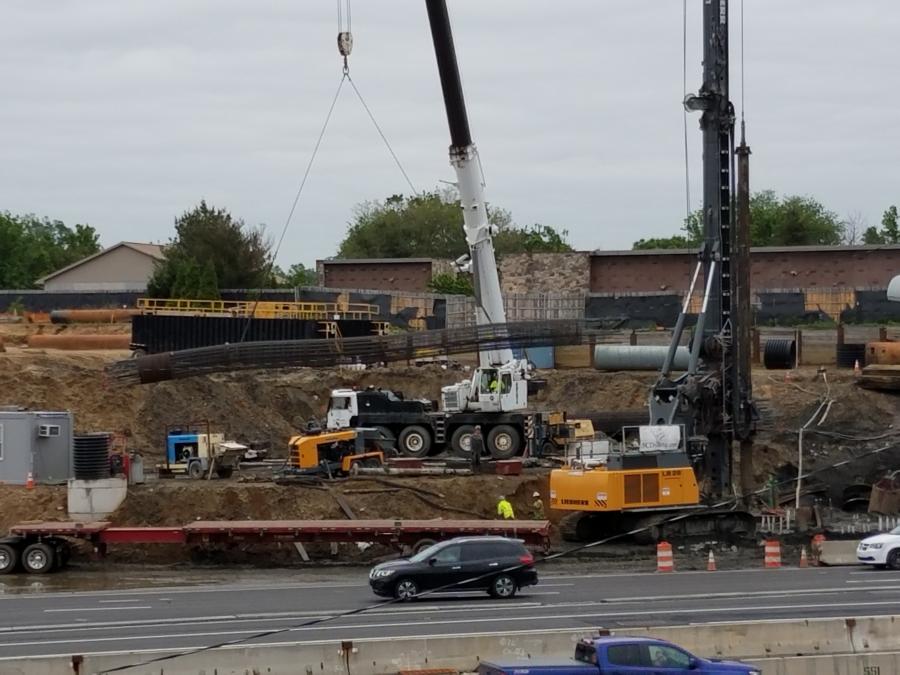 PKF also made the decision to maintain direct control of critical aspects of its projects, the result being that today PKF emphasizes its efficiency at self-performance in its process mechanical and instrumentation work.

In about 3.5 years of work on Contract 1 of the Direct Connection, PKF replaced two local road bridges over I-295 and Route 42, as well as began construction of four retaining walls that would be completed in subsequent contracts, said Schapiro.

In addition, a temporary ramp was constructed by PKF to eliminate the vehicle weave between Route 42 North and I-295 North for the duration of construction, as well as a new ramp from I-295 North over Route 42. Schapiro said these ramps have already made for a safer and easier flow of traffic, while also minimizing congestion during the construction.

This initial part of the Direct Connection was finished by PKF in November 2016.

Five years of work went into completing the road project's Contract 2, with Conti Enterprises serving as the prime builder. Based in Edison, N.J., Conti began operations at the site in June 2014.

Founded in 1906, Conti Enterprises works primarily in civil construction, where it offers a variety of full-service capabilities. It is a specialist in completing demanding projects ranging from roads and bridges, rail, airports, dams, ports, and heavy infrastructure in the public and private sectors. 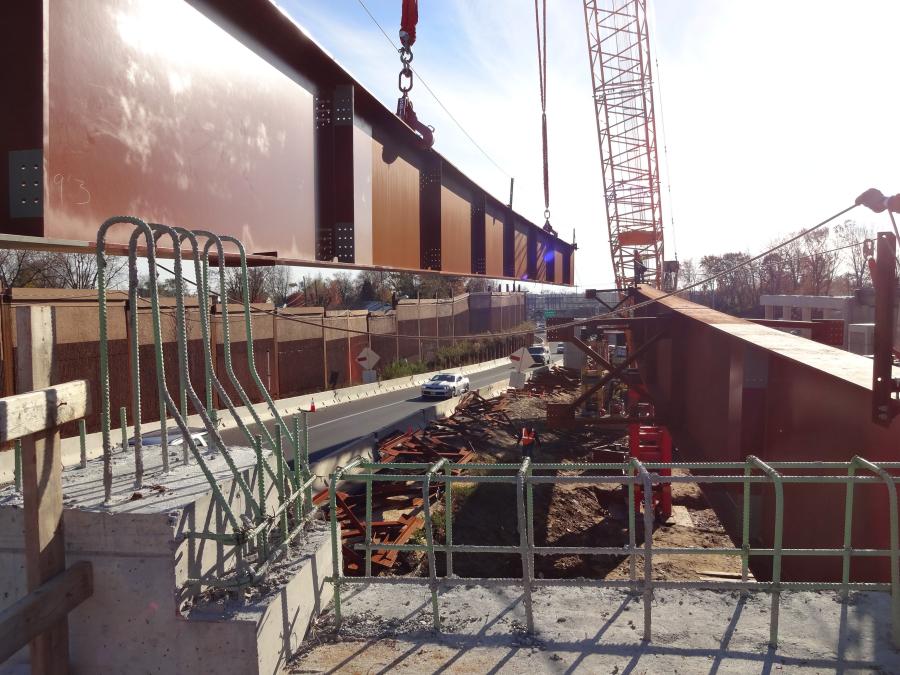 Conti is consistently ranked among the top civil construction companies in the United States and has garnered a long list of awards for project excellence in the past 10 years. Additionally, the firm's safety program resulted in 348,000 man-hours without a single lost time safety incident, for which Conti received the 2016 Liberty Mutual Gold Safety Award.

Contract 2 called for Conti to demolish and replace an existing bridge and construct a 500-ft. wide bridge that will eventually carry all I-295 traffic. The company also built on and off ramps, a temporary bridge, installed sheeting for tunnel and bridge shoring, and performing ground improvements and roadway construction.

"The most notable piece of this contract was the building of the five-lane covered roadway where two lanes of traffic coming from I-76 eastbound merges with three lanes of traffic from I-295 northbound," described Schapiro. "The covered roadway was opened in February 2019 and the existing traffic pattern will stay in this configuration until the entire project is completed."

A portion of the structure for the new I-295 bridge to go over the ramp from I-76 East to I-295 North was completed as part of this contract last summer. The rest of the bridge, he said, is currently being built as part of Contract 3.

Crews under the direction of South State Inc., a heavy highway and bridge builder in Bridgeton, N.J., began its portion of the Direct Connection in April 2017, with the goal of finishing in late 2024. 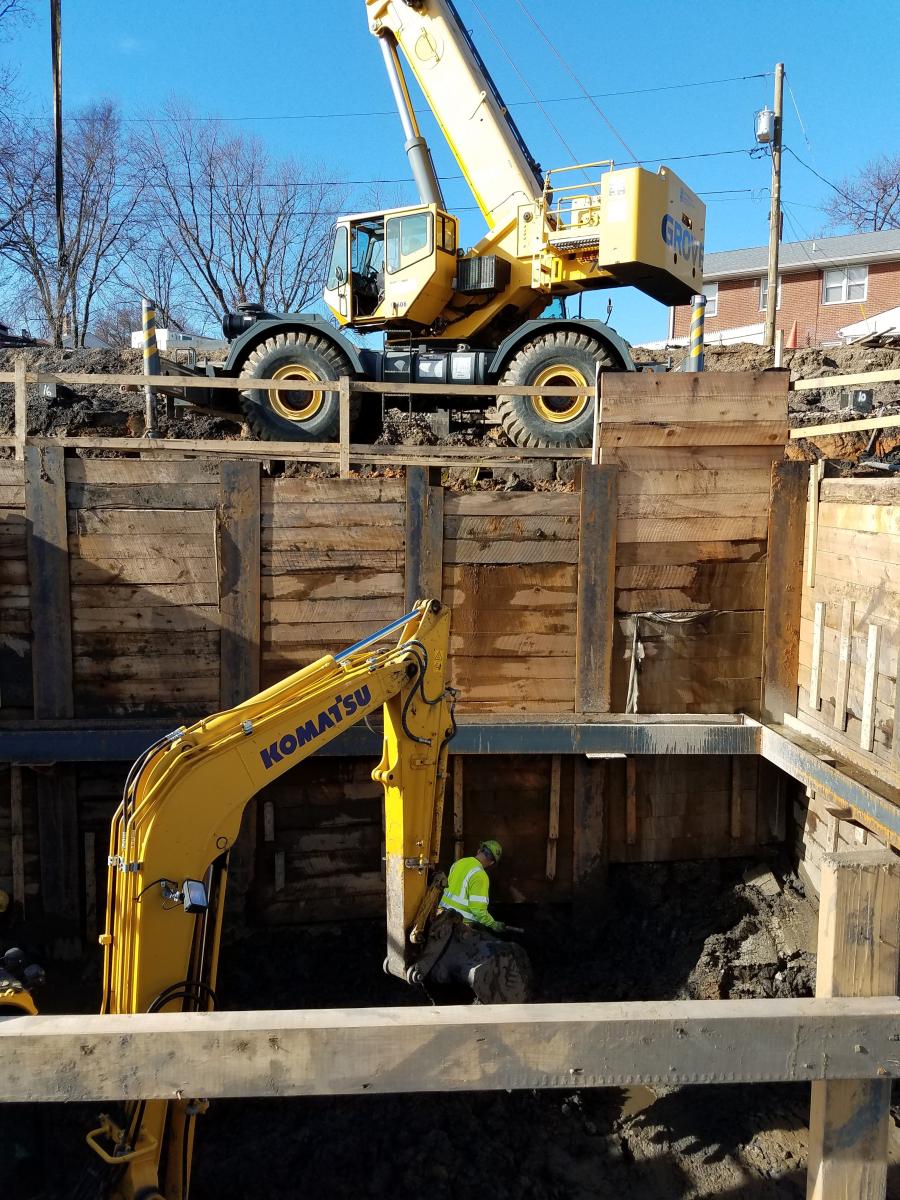 South State was founded 49 years ago by Chip Ottinger, who, with his father, Chet, operated a small paving business in Red Bank, N.J., in the 1960s. The southern New Jersey firm has continued to be a family business that works as a general, asphalt paving and heavy highway contractor. Today, it employs more than 250 people from its 300-acre base of operation in Bridgeton.

Under the current leadership of company President Chip Ottinger Jr., South State has seen great success and continuous growth over its lifetime. It has done so while fulfilling its goal of developing an exceptional team of professionals who work with diligence, perseverance, attention to detail and a strong work ethic.

South State's focus regarding Contract 3 has been on completing the three I-295 mainline direct connection bridges over Browning Road and I-76/Route 42. Company crews also replaced the Browning Road bridge with a temporary modular steel truss span while the permanent bridge is being erected off the road. Later, it will be pushed over the freeways into place.

On Contract 3, South State has so far completed:

Other jobs still to be performed on the current contract include:

Seven years of construction to create the Direct Connection has meant a tremendous amount of expert earthmoving, pile-driving and concrete and asphalt work, with another seven years to go, NJDOT's Schapiro said.

"For example, the bridge approaches where the new section of I-295 crosses above the Browning Road bridge require large amounts of fill contained within retaining walls," he said. "The same is true for the ramps and bridges. Excavations are required because of the mainline full-depth reconstruction.

"The bridge foundations are founded on either driven piles or drilled shafts. Most of the structures have some sort of spread footing or cap. Supports-of-excavations may be driven sheet piles, driven soldier pile/lagging or augered soldier piles/lagging."

The project's substructures are either precast concrete or cast-in-place and most of the superstructures are steel beam with concrete decks. Precast panels are being used for the retaining walls, with the roadway noise walls made up of precast concrete. The road box is standard sub-base, dense-graded aggregate and hot mix asphalt.

A large and intricate project like the long-gestating Direct Connection means hundreds of pieces of tough, top-shelf equipment have been put to work, among them, cranes, bulldozers, excavators, combination backhoes and front-end loaders.

One More Contract to Go