Material Handler Proving Its Worth at Tilcon Quarries

Driving around Tilcon’s Clinton Point quarry in New York, you will find the typical equipment expected at a facility that processes crushed limestone at a high capacity. 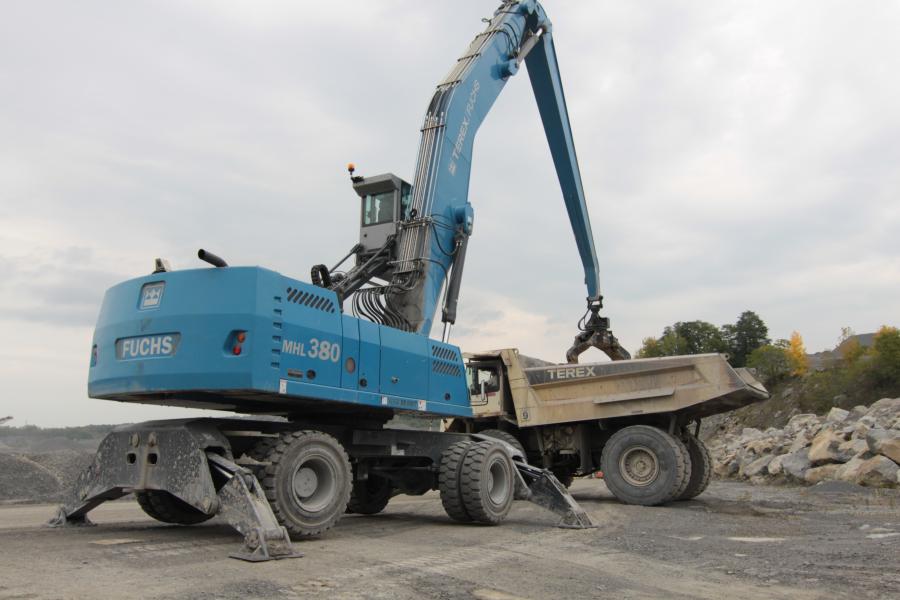 Since the machine is purpose-built to handle material, the MHL380 handler’s hydraulics are plumbed for lifting, so it offers high lift capacities at an extended reach.

Driving around Tilcon's Clinton Point quarry in New York, you will find the typical equipment expected at a facility that processes crushed limestone at a high capacity. Multiple excavators, loaders, rigid haul trucks and crushing circuits dot the landscape of the 1,200 acre property to load, move and crush 3.1 million tons (2.8 million t) of dolomitic limestone.

Moving closer to the quarry's property line along the Hudson River, however, you'll spot a blue piece of equipment that is seemingly out of place. It has a similar appearance to excavators found at the quarry, but it's not an excavator.

Its wheeled drive train allows it to move about the quarry much faster than an excavator. It also has a noticeably longer boom/stick reach when loading barges with material, and the cab elevates and extends the operator in ways an excavator cannot.

“It can also fully load a barge with riprap in as little as four hours,” said William Leibbrant, Clinton Point plant manager for Tilcon.

The Fuchs material handler was once rented for a particular purpose at Tilcon's Haverstraw and Clinton Point locations, but has since proved to be a versatile tool for the aggregate producer.

In March, 2015, Tilcon entered into a contract to supply riprap for multiple shoreline projects along the New York City's Long Island coast. The contract was originally sold through the producer's Haverstraw quarry, which produces a high density basalt product. The project spec required each stone to be between 4 and 10 tons (3.6 and 9.1 t).

“We had the dock but no infrastructure to load the barges, so we were looking for a machine with the capacity to load up to an 11-ton stone at a 44 foot reach,” explained Slaughter, who set out on a mission to find a machine that fit Tilcon's needs.

“We looked at a couple of options,” said Bill Tucker, sales representative for Edward Ehrbar Inc. “One machine was a modified excavator/handler with a stationary elevated cab that offered reach options from 55 to 68 feet. We also considered the Fuchs MHL380 handler that offered a hydraulically elevating/extending cab and up to a 72.2 foot reach.”

For the quarry, obtaining a modified excavator was not an issue, as excavators are commonplace at most quarries. A material handler, on the other hand, is more of an unknown. They are likely to be found in port applications but not at a quarry, and Tilcon's New York Division did not have a handler in its equipment fleet.

Even though the producer did not have experience with the handler, officials liked what they saw and worked with Ehrbar on supplying the MHL380 handler. It arrived at Haverstraw quarry in April, where its primary mission was to load barges with riprap that were then sent down the Hudson River to Long Island. The grab attachment was especially built to accommodate the size of the dense basalt riprap stone.

Not only was the material handler something new for Tilcon officials, but the equipment operators at the plant had no previous experience with the machine either. Tilcon pulled and trained its excavator operators on the use of the MHL380 handler.

“Our operators quickly picked up on running the material handler after about three hours of training,” said Leibbrant.

As safety is Tilcon's number one value and concern, one of the first items officials wanted to ensure was the operating stability of the material handler. Whereas the excavator operators were used to a tracked undercarriage which gives the impression of higher stability, the material handler had a wheel drive train.

“The MHL380 handler,” said Fuchs technical sales manager, Steve Brezinski, “is equipped with four point outrigger stabilizers that spread out over an 18.7- by 21.7 foot area for excellent stability. It offers better stability than the excavator at an extended reach.”

The handler's hydraulically elevating cab design helps to improve loading efficiency. The machine offers a maximum eye-level operation of 20.3 ft. (6.2 m) to improve all-around site visibility, and its independent horizontal adjustability of up to 7.2 ft. (2.2 m) allows the operator see into the hull of the vessel.

While the handler was efficient at loading the barges at Haverstraw quarry, Tilcon officials worked with the Army Corps of Engineers to allow the limestone product at the producer's Clinton Point quarry to be used for the shoreline reinforcement projects. With established port access and two stiff-leg cranes, the Clinton Point operation was set up for higher loading capacity.

“It's an opportunity to serve our customers in a higher capacity, so it's better for all parties,” said Slaughter.

The dolomitic limestone product at Clinton Point was less dense than the Haverstraw basalt, so the riprap pieces were larger to meet the 4- to 10-ton (3.6 to 9.1 t) specification. With the grapple attachment purchased specifically for the Haverstraw product, Tilcon went back to Ehrbar for some modifications.

Tucker stated, “We extended the tines of the grapple so it could easily grab the larger feed material.”

“This turned out to be a slow process, as we could only get three to five pieces on the platform at one time,” said Leibbrant. “The MHL380 handler, even though it places one stone at a time, was about 20 percent more productive than the crane, due to the slow cycle time of the stiff-leg model. Plus using the handler instead of the crane freed up the loader for other work in the quarry.”

The officials also experimented with an excavator they had on site to load the barges.

“We could only load half of the barge at a time with the excavator, and then we would have to spin the barge around to load the other side,” explained Gerald Smosarski, equipment superintendent at Tilcon's Clinton Point operation. “It took about two days to load a barge with the excavator.”

However, the MHL380 handler could load a barge in less than six hours, and it efficiently handled the riprap material.

“The hydraulics appear to be stronger on the handler than the excavator,” observed Slaughter.

Fuchs' Brezinski explains that this is due to the handler's purpose-built design.

“An excavator's hydraulics are arranged for digging, while the handler's hydraulics are set up to lift material. In addition, the MHL380 handler's slewing ring is positioned in the center of the undercarriage base, compared to the excavator's off-set ring positioning, offering the same load handling capacities throughout its 360-degree rotation.”

Tilcon stuck with the material handler to load barges at Clinton Point. With the capacity to load two barges per week, the handler had some availability to do other work at the quarry.

“Jamie [Slaughter] came to us and said, 'See what other uses you can find for the handler,' so we have been experimenting with it in a number of ways,” said Smosarski.

With riprap being the heaviest job at the quarry, if the handler can handle that, then it can handle other projects.

When the long-reach excavator, typically used to remove fines from the wash plant retention ponds, was temporarily moved to another Tilcon site, the MHL380 handler stepped in to take on the job. It was equipped with a 3-yd. (2.3 m) clamshell bucket and put to work. Tilcon employees were thoroughly impressed.

The handler also has been used to remove oversized shot rock from the blast material.

“Before, we used large loaders to pull out the oversized material,” said Leibbrant, “but picking out the large rock with the handler has also worked well.”

Although not having gone the material handler route before, the MHL380 handler has impressed Slaughter enough to where he sees the need for a handler at a quarry.

“As long as there is enough work and the cost per hour is better than the alternative, there is a place for a material handler at a quarry,” said Slaughter.