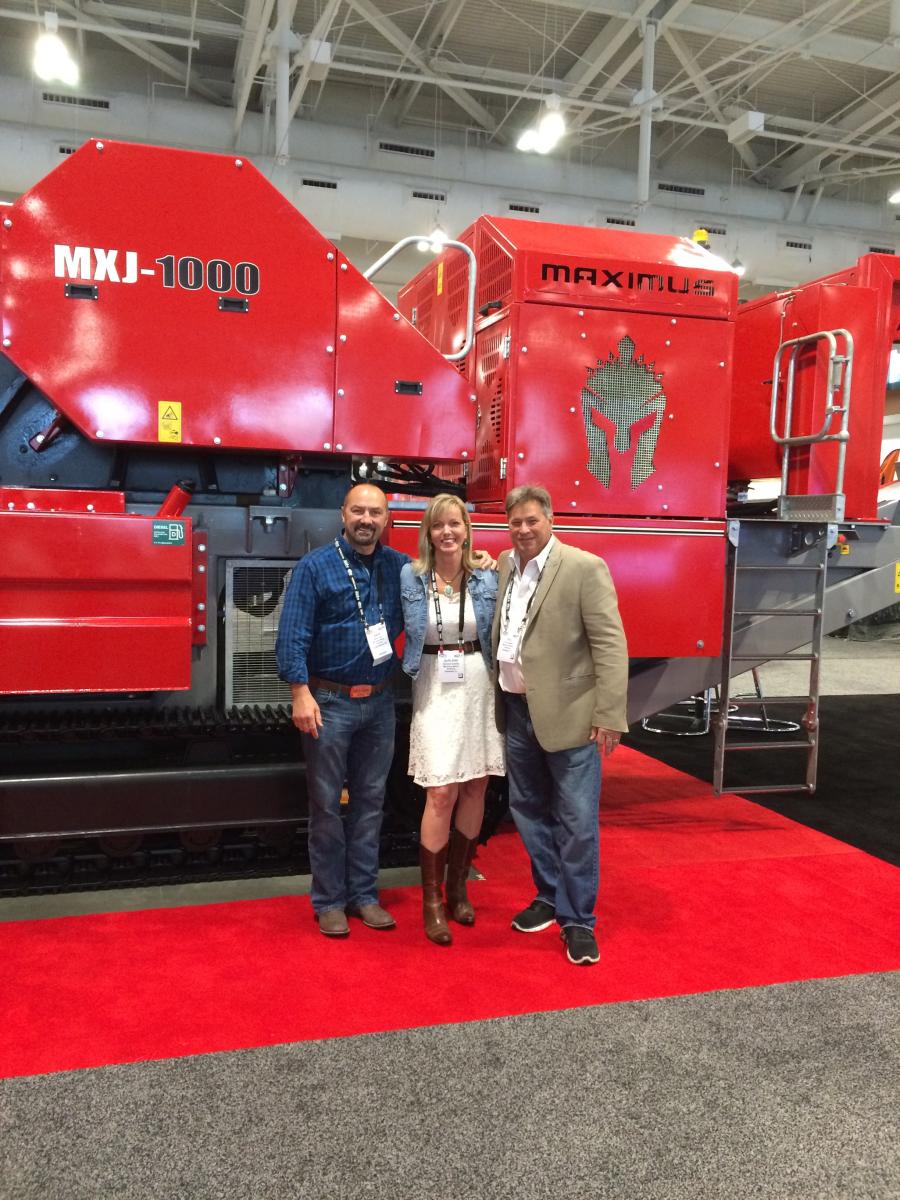 (L-R) are Dave Turin and Darlene and Stu Gamble

Maximus North America is setting the gold standard for the Mobile Crushing & Screening industry by introducing the Irish based Maximus Crushing and Screening product line into North America in 2015. This statement proved to be true and ironic when one of the stars of the Discovery Channel's hit TV show “Gold Rush” noticed the bright red Maximus MXJ-1000 Jaw Crusher at an industry trade show in 2016.

Dave Turin, who oversees mining and production for 316 Mining LLC, otherwise known as The Hoffman Team, stopped by the Maximus North America stand as he was leaving the trade show because the quality, fit and finish of the machine caught his attention and he was interested to see whether there might be any synergies between the 316 Mining Team and the Maximus brand.

Stu Gamble, president of Maximus North America, and a few of the MNA dealers struck up a conversation with Turin about the product line and it was discovered that Maximus did indeed have a machine in its product line that could fit in the gold mining operation.

The 316 Mining Team's set up at the time included a trommel screen that could separate material but did not have a hopper which would allow material to be fed into it. Maximus builds a TFC-80 360 degree swivel feed hopper stacker that would have the capability of remotely operating on a 90 degree angle. This technology would allow The Hoffman Team to feed pay dirt directly into the hopper on any terrain angle, which then would feed directly into the trommel that the team was using to separate the rocks from the fines of the pay dirt.

The Maximus TFC-80 not only increased the team's production ability but also was used to return the dredged land back to its original condition after the gold was mined, which is something that the mining team holds as a top priority.

In the world of gold-mining, there are very few things that are predictable. Adverse weather conditions, rough terrain, the threat of wild animals always very real and present, and the hurdle of mounting expenses with no guarantee of a pay out, all could very well turn away the average miner to give up their dream of finding real gold. The 316 Mining Team's tenacity and determination, coupled with the dependability of the high-performance, high-quality Maximus machine turned out to be a winning gold standard combination.

Maximus North America welcomes the 316 Mining Team to its booth at ConExpo 2017 in Las Vegas and would like to invite everyone to stop by for autographs and conversation with Turin to speak with him about his experiences with the Maximus product line. The TFC-80 Stacker will be displayed on Silver Lot 1 #S-5007.