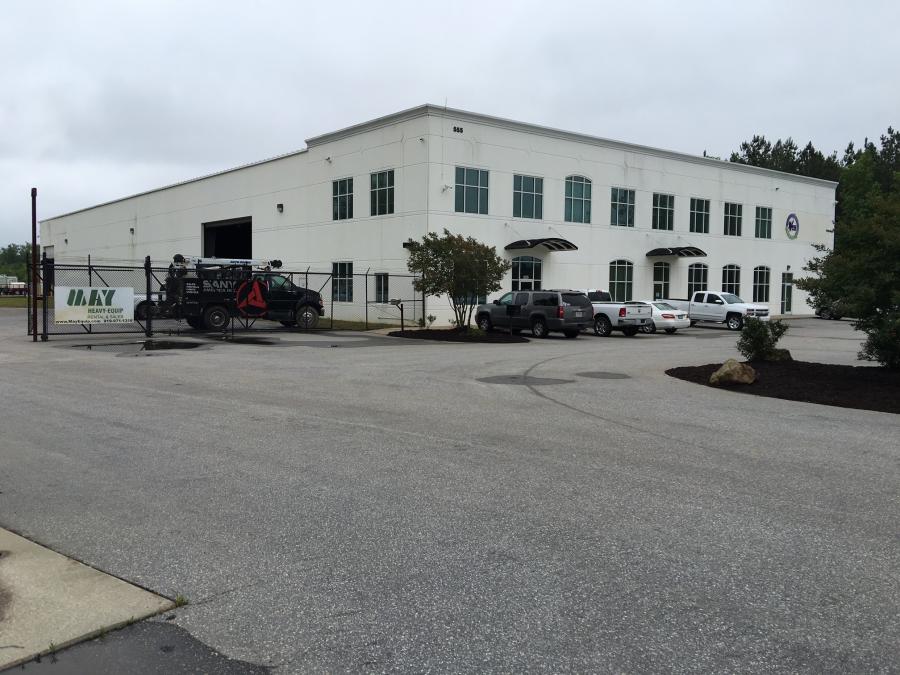 May purchased Tar Heel Machinery, a company that itself had grown to be one of the Raleigh area's top equipment dealers.

With that investment, May was able to add more stability to its market into the Triangle with quicker service support and from there to locales farther east and south of Raleighwith established personnel out of Clayton.

“May was looking for a stronger presence in eastern North Carolina, add a brick-and-mortar location, as well as some more aales and support personnel in this market,” said May's Scott Woody, general manager of the Clayton. “They also wanted to be oriented with a company like Tar Heel.”

Through March 2016, May initially occupied Tar Heel's former Clayton dealership, where Woody had been that company's co-owner and managing member (another Tar Heel store in Reidsville has been closed). Other May locations are in Lexington, N.C. and in Columbia and Summerville, S.C., near Charleston.

Besides the Carolinas, May serves customers in Georgia and Virginia, as well with rental needs and used equipment, as well as selling equipment to dealers and individuals all over the world.

Founded in 1997, the company offers contractors throughout the Southeast a large array of earthmoving and paving machinery available.

With the purchase of Tar Heel, May currently has approximately 60 employees.

Part of May's motivation in acquiring the company, according to Woody, was because it was looking to add another solid excavator line and Tar Heel provided that with its inventory of SANY equipment.

“A top-shelf excavator line is the basis for any good rental company,” he said.

Bringing on the SANY line is part of May's desire to broaden its inventory and assemble an impressive roster of some of the largest independent manufacturers to offer its customers.

In addition, May heavy is extremely excited about it's newest relationship with Link Belt Excavators in 15 counties surrounding Raleigh and Wake County.

“We are working to provide a contractor with practically anything you would need to rent for any earth moving or paving construction project," Woody said. "There is a large rental fleet here with about 265 machines available right now. ”

Happy Customers Are the Key

In order to keep his customers satisfied, though, Woody knows the real work on May's part comes after the deal is done and the contractor takes possession of a piece of equipment.

“Tar Heel Machinery had always been known for good service, for being personable,” he said. “We had always been a smaller company and that allowed our customers to get to know us on a personal level. Well, May is exactly the same. Even though we are a much larger organization now, we aren't so large that we have lost touch with our customers.”

He said May's customers understand that they are free to call its salesmen or service managers directly, even at night, to help them with any equipment problems.

“They know our people by name and have their personal numbers,” he said. “In certain critical situations, if our mechanics need to stay up and work until all hours of the night, then that's what they will do.”To improve upon its response time to any troubleshooting or repair needs in North Carolina, for instance, May's service trucks and technicians are spread out from Mecklenburg County to Johnston County.

May Here for the Long Term

“Ultimately, we are going to be here for the long term and we have to prove that to our customer base,” Woody said.

Woody said that it is his wish that May Heavy Equipment be thought of by contractors and other construction people as a company that wants to meld and work with them to make their businesses prosper.

“Our goal as a company is to be the best and the largest non-mainline dealer in the mid-Atlantic states,” he said. "We offer multiple lines of equipment from several of the big manufacturers and of course, May represents many single-line manufacturers, too. With that in mind, we also want to give the customer everything or more than the mainline dealers do by our OEM setup.”

The philosophy appears to work well for May as it is very popular among construction people in the region. The proof of that can be found in the fact that, among several of the manufacturers it represents, it ranks in the top three across the country in terms of total sales volume. That is quite an accomplishment for a company that is not even two decades old.