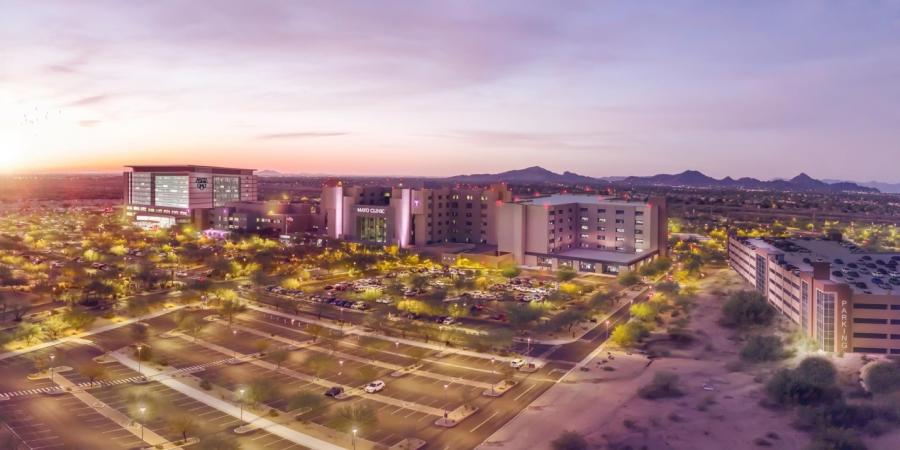 To meet the increasing demand to treat patients with complex health conditions in the growing Southwest, Mayo Clinic announces a $648 million expansion that will nearly double the size of its Phoenix campus over five years.

The Arizona Forward Project will add 1.4 million sq. ft. of building space (to the existing 1.7 million sq. ft.) with expanded clinical capacity, support services and infrastructure at the campus located near Loop 101 and 56th Street in North Phoenix.

“Patients recognize that Mayo Clinic provides some of the best and safest care in the United States. Growing our facilities in Arizona to accommodate increased demand is essential,” said Wyatt W. Decker, M.D., vice president, Mayo Clinic, and CEO of Mayo Clinic in Arizona.

The facility was recently again ranked No. 1 in the state by U.S. News & World Report's Best Hospitals, and is the only Arizona medical center on the prestigious U.S. News Honor Roll.

“Mayo's commitment to the health and vitality of Arizona began when we saw our first patient in Arizona more than 30 years ago,” said Decker. “Arizona Forward represents our commitment for the next several decades and beyond — innovating to improve the physical health of patients and the economic health of the state we call home.”

The highlights of the expansion include a new six-story patient tower; a three-floor addition to the existing four-story Mayo Clinic Building; a new three-story building to house an expanded Emergency and other departments; expanded patient and infrastructure space; and additional parking.

Arizona Forward is a five-year project with new patient areas projected to open as early as June 2020, culminating with the final phase opening in April 2023.

News of Mayo Clinic's expansion was welcomed by Arizona Gov. Doug Ducey, who said it will support the state in a variety of ways.

“Mayo Clinic's presence in Arizona has propelled our state's health care and bioscience industry, and their enhanced investment is another sign that this industry is thriving,” said Ducey. “Not only will those of us in Arizona be served by expanded services at Mayo Clinic, but it will further secure Arizona as a global destination for excellence in health care.”