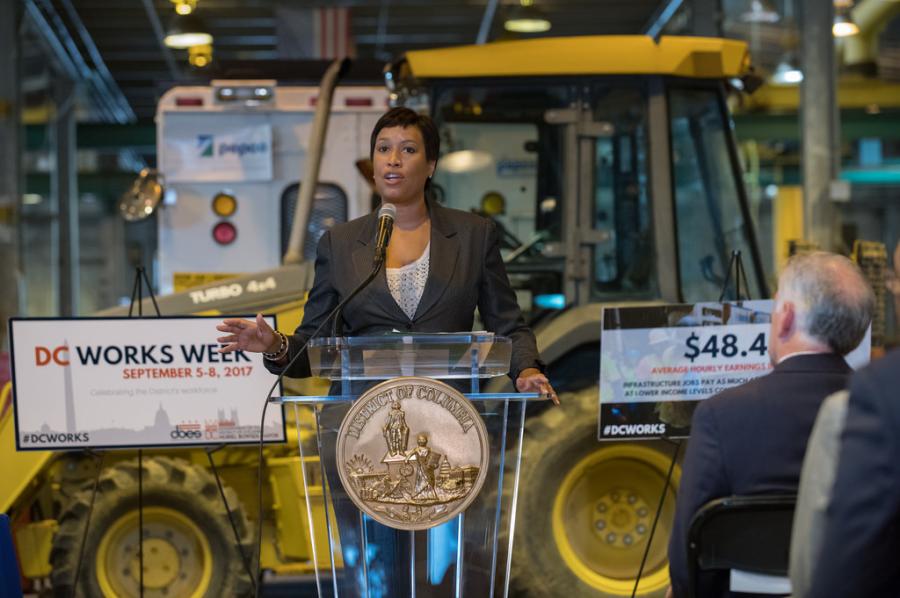 Washington, D.C., Mayor Muriel Bowser signed a memorandum of intent to formally launch the DC Infrastructure Academy, a partnership between D.C. government and utility, union, university and private sector partners that will create a pipeline to in-demand infrastructure jobs for district residents.

The DC Infrastructure Academy will bring multiple infrastructure related workforce development activities together under one roof to provide D.C. residents with high-quality, specialized trainings and programs, with a focus on underserved, underemployed and unemployed residents. Modeled after similar successful programs in Chicago, Philadelphia and Georgia, the DC Infrastructure Academy will provide residents with the necessary skills to obtain and maintain careers in one of the fastest growing industries in the nation.

The infrastructure industry, which is currently experiencing a gap between open positions and available workers to fill them, is one of the fastest growing industries in the nation. Nationally, energy efficiency firms project 14 percent sector growth and the addition of 257,000 jobs over the next year. In 2016, more than half of Washington, D.C.'s open infrastructure positions went unfilled. The average hourly wage for an infrastructure worker in the district is $48.45.

“The promise of the infrastructure industry is real,” said Deputy Mayor Courtney R. Snowden. “Approximately 2.7 million infrastructure workers are expected to retire or leave their jobs over the next decade. In D.C., we stand ready to train our residents and create a pipeline to good paying, quality careers through this innovative partnership.”

The Infrastructure Academy is being funded by the Mayor's $16.75 million commitment in the city's capital budget and a $5.2 million contribution to workforce development programs that Pepco provided in the Exelon-Pepco merger preceding. In addition, Pepco and Washington Gas have agreed to provide $500,000 each in cash contributions, donated human resources, equipment, and other in-kind materials and services over the first five years of the academy's operation.

The Department of Employment Services will operate the DC Infrastructure Academy and work with public and private sector partners to align trainings and programs. By the end of the first quarter of 2018, the District will establish an interim infrastructure academy, located east of the Anacostia River. This site will serve as a temporary home until a permanent facility is completed.

“Pepco and Exelon are proud to partner with Mayor Bowser and the D.C. government to develop the Infrastructure Academy, laying the groundwork for well-paying jobs and successful careers,” said David Velazquez, president and CEO of Pepco Holdings. “As a local company, it's our job to keep the lights on and the doors of opportunity open for district workers and families from every neighborhood.”

“Exelon is empowering communities and creating opportunities for people where we live and work,” said Bill Von Hoene, senior executive vice president and chief strategy officer of Exelon. “When we joined forces with Pepco, we committed more than $5 million for job creation and training. The Infrastructure Academy will enable hundreds of people to develop the skills to work in areas that will remain critical to supporting a city like Washington and put them on a path to a good-paying career.”

The DC Infrastructure Academy builds on a series of efforts and initiatives developed by the Bowser Administration to get D.C. residents connected to careers in the infrastructure industry. In July, the Mayor kicked off the first cohort of Solar Works DC, a job training program that installs cost-saving solar energy systems on the homes of low-income residents.

A joint effort between the Department of Energy and Environment (DOEE) and the Department of Employment Services, Solar Works DC provides on-the-job technical training while reducing energy costs for up to 300 D.C. residents by as much as $600 annually. In April, the Bowser Administration, in partnership with Pepco Holdings and the University of the District of Columbia Community College (UDC-CC), launched the DC Quick Path to Energy Program, a workforce development training program that connects residents to employment in the utilities industry.

Since January 2015, the unemployment rate in Washington, D.C., has dropped by 1.1 percentage points, including decreases in all eight wards.