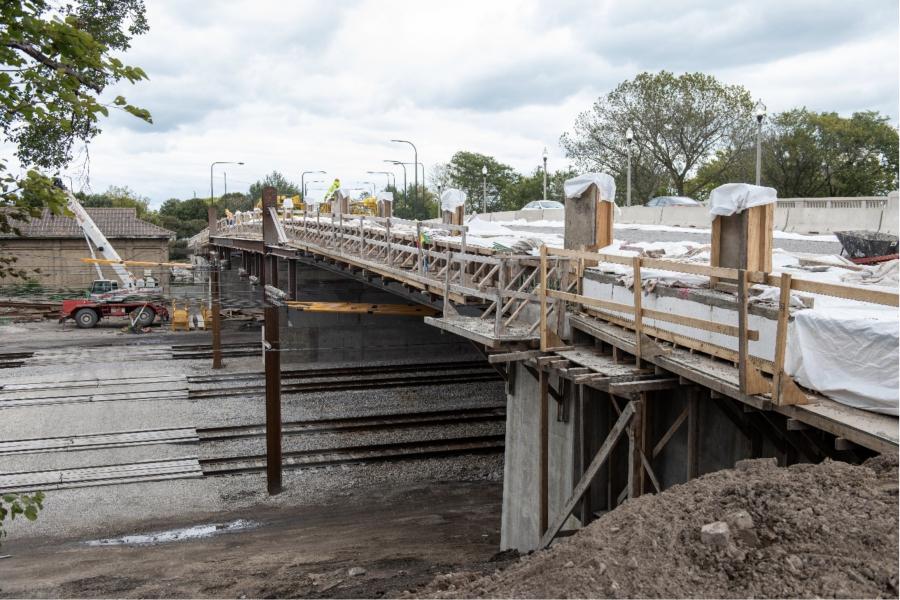 The Chicago Works plan includes $164.3 million to complete the funding for 23 bridge replacement projects; $66.2 million for 37 bridge repair projects; $16.9 million to rehabilitate 13 underpasses; and $7.5 million to begin the process of improving vertical clearance at five viaducts.

With the 2021 paving season under way, Mayor Lori E. Lightfoot joined Aldermen and city officials on April 26 to launch the Chicago Works jobs and infrastructure plan. The event kicked off the first year of the five-year multi-billion-dollar Chicago Works Capital Plan. The 2021 first installment will include more than $600 million of infrastructure modernization projects to enhance the quality of life for all Chicago residents in all 77 communities.

The plan relies on data to select and prioritize investments across the full array of public assets, addressing the worst first, along with an emphasis on equity and safety in order to create jobs and spur the city's recovery from the COVID-19 pandemic while addressing decades-long backlog of infrastructure needs.

The mayor made the Chicago Works announcement in Auburn Gresham on the South Side at the site of a Chicago Department of Transportation (CDOT) arterial resurfacing project at 81st Street and Damen Avenue. Over the next two years, CDOT will leverage and supplement federal and state funding to resurface 75 mi. of arterial streets annually; almost double the miles of a typical year. Similarly, 500 more residential blocks will be resurfaced each year (1,240 blocks per year vs. 740 blocks in past years).

"With paving season under way across our city, we are thrilled to be able to create and offer jobs to our residents that will allow us to make critical infrastructure repairs in all 77 of our neighborhoods," said Lightfoot. "With an emphasis on equity, the Chicago Works infrastructure plan will allow us to invest in the lives of residents in need and bring our entire city closer together by literally building bridges between our communities. This effort will allow us to unlock our city's full potential; give our residents the resources they need to succeed right in their own neighborhoods; and ensure that our city retains its reputation as a world-class destination filled with state-of-the-art infrastructure."

Chicago Works dedicates funding for the repair and replacement of traditional infrastructure like roads, bridges, sidewalks, Americans with Disabilities Act (ADA) accessible crosswalk ramps, streetlights and traffic signals among others. The Chicago Works plan also includes funding for projects that will redefine Chicago such as nine new streetscape projects in INVEST South/West neighborhoods, funding for public art, the planting of trees and the implementation of Complete Streets designed for next century. The city is funding the 2021 and 2022 construction through $1.4 billion in General Obligation (GO) bond proceeds that represent the first installment on a $3.7 billion five-year Chicago Works plan.

"The Mayor's Chicago Works Capital Plan provides the funding and framework for a legacy investment in our critical transportation infrastructure in neighborhoods across the city, especially in communities challenged by mobility and economic hardships," said CDOT Commissioner Gia Biagi. "As our city leads the way on recovery from the pandemic, Chicago Works includes funding for streetscapes, lighting, bikeways, bridges, sidewalks, traffic safety, public art and more. These improvements prioritize making it easy to safely move around the city in sustainable ways like walking, biking and taking public transit while making our streets and our public way vibrant, safe and inviting places."

In addition to addressing deferred maintenance, the city also will engage with Aldermen and community groups in the planning and design of new neighborhood investments that will enhance community vitality and drive economic development.

The investments laid out in the five-year Chicago Works Plan will make meaningful improvements to address sustainability issues in Chicago such as greenhouse gas emissions, storm water management and local air quality. Notable investments will be made to improve conditions for residents who walk, bike and take public transportation, allowing for safer and more efficient citizen experiences across the city.

The Chicago Works plan also includes meaningful efforts to address deferred maintenance needs in city buildings such as libraries, firehouses and health centers across Chicago. Improvements include, but are not limited to roofing, heating/cooling/ventilation systems, electric and plumbing to enhance the safety and energy efficiency of buildings. The city's fleet also will receive new investments, including public safety vehicles and streets and sanitation specialized equipment, as AIS works toward its goal of attaining a smaller fleet with newer vehicles ultimately requiring less spares and vehicle maintenance. Newer equipment also provides greater fuel economy, higher reliability and modern safety features.

"Revitalizing Chicago's facilities improves the quality of life in every community by ensuring residents can enjoy city services and programming in buildings that are welcoming and safe," said AIS Commissioner David Reynolds. "Additional investments in fleet and equipment will not only drive down our operations and maintenance costs but improve the efficiency and productivity of our workforce ensuring residents get services faster."

The plan is expected to bring thousands of Chicago residents back to work; most programs require at least half of the work be performed by Chicago residents. The city procurement and contracting process will place a high priority on using minority, women-owned and locally owned businesses. Comprehensive and consistent outreach, education and support for these businesses and proactive workforce partnerships, paired with strong enforcement of contract goals and commitments, will receive renewed focus and be a hallmark of this Capital Plan.

The Chicago Works plan is comprehensive and designed to address every type of public infrastructure. Highlights of the first two years of funding include: