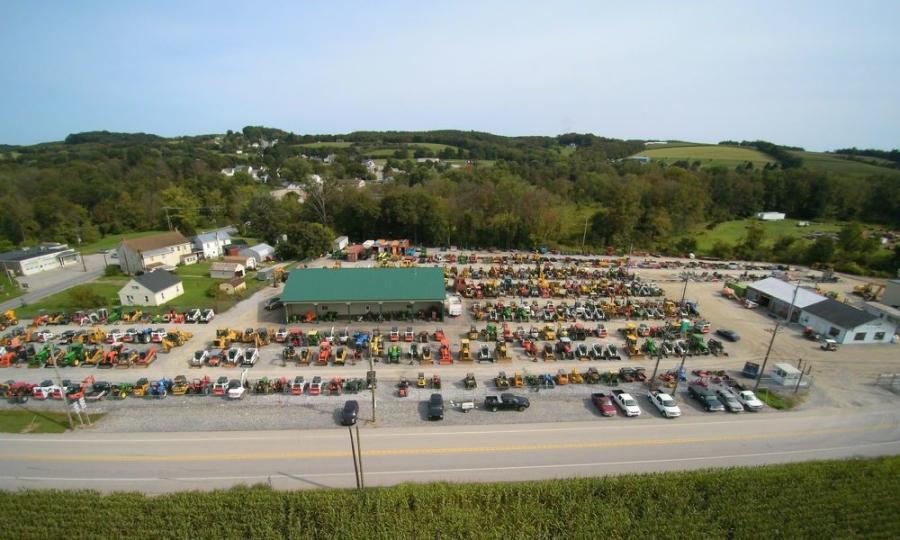 Entrepreneurship is not just about an idea: it's taking that idea and accepting the fact that you're probably going to have to make it happen by yourself at first and all the while practicing what Apple once used as a slogan … Think Different.

That's what Greg McGrew did with his company, McGrew Equipment Company, 20 years ago and is still doing today.

"I just started myself trading equipment," said the founder and president of McGrew Equipment Company of his start back in 1999. "I was buying and selling tractors and equipment, manuals, and whatever I could do to make a dollar."

Soon, McGrew decided it made sense to get into the auction business, which he did with his first sale in 2000. Then, he held another sale at another location in Kingsdale, Pa. In 2001, he hired his first employee. A permanent auction site where all of his auctions could be held made sense, too, so he purchased a 20-acre location in Seven Valleys, Pa.

"It grew organically," McGrew said. "I started traveling the country and buying more stuff and bringing more machines to Seven Valleys and every month, the auctions just kept getting bigger."

Grow it did — from just two sales a year in the early 2000s to 12 and from two employees, including himself, to nearly 40 employees today, McGrew became a fast mover in the auction industry.

"Usually we try to get people to bring the equipment to your yard because it saves on the cost," he said. "We are already doing the auction anyway so there is no extra advertising expense to the seller. Throughout the year, there will always be several contractor and farmer sellouts, and we have several companies that send in their surplus items on a monthly basis."

McGrew Equipment Company looks to distinguish itself by trying a different approach with its live onsite auctions in the drive-through building.

"We have the crowd on both sides of the equipment," said McGrew. "The equipment runs through the center of the drive-thru building. I think it offers a lot of advantages to the seller and to the buyer, but I also want the buyer to be able to ‘touch' the equipment and you can't do that from 70 to 80 feet away. I like the drive-thru format where the buyers can connect and see the stuff and get their hands on it, you know, check something out at the last second."

McGrew also hosts online-only auctions once or twice a year.

"We get circumstances where people have a tight yard and it's too expensive to move the equipment because it is too big and they also don't have room to host an auction.

"Everything will be just like a live auction, except for the bidders and the crowd and the equipment will be off site."

The physical onsite auctions are still thriving and remain a strong draw for bidders, McGrew added, though on average there'll be three to four times more online bidders than people physically at the auction site. But sales are strong onsite.

"We probably sell 75 percent on site," he said. "Most wholesalers are on site and most of the retail buyers wanting one or two items bid online.

"You watch some of the online auctions and they don't know that their market is as consistent as ours is. You can take a certain machine, whatever model you pick, and you can say OK, the market on that bid at our auctions throughout the years is $15,000 and you look at that same machine on another online auction, and you will see more of a swing, and it can be higher, but also, there will be times it will be lower.

"There is an inconsistency in the market in weekly, online-only formatted auctions," he added. "If you watch similar machines sell over a four to six-week period, the price can vary by a large percentage. "

McGrew Equipment also prides itself on its customer service and going the extra mile for its customers.

"We try to price ourselves cheaper; I don't know if it's the right thing to do, but we do try to do it. As far as our trucking, our commissions, we don't charge for a key, we don't always charge for fuel. If someone brings us a $100,000 machine, and it's completely out of fuel, we might charge the guy, but if we need to top some fuel off or something like that we aren't going to send the customer a $100 bill, like some of those bigger outfits do.

"One good thing I like about the auction business is, regardless of if the economy is good or bad, you know, it's an important industry. I think when things are good, people are too busy to take the time to liquidate their stuff, and they need someone to do that for them. And, I think when things are bad, obviously, people need to get money quick and the auction business is the way to do that."