MDOT: I-75 Project to Be Completed a Decade Sooner Due to Innovation 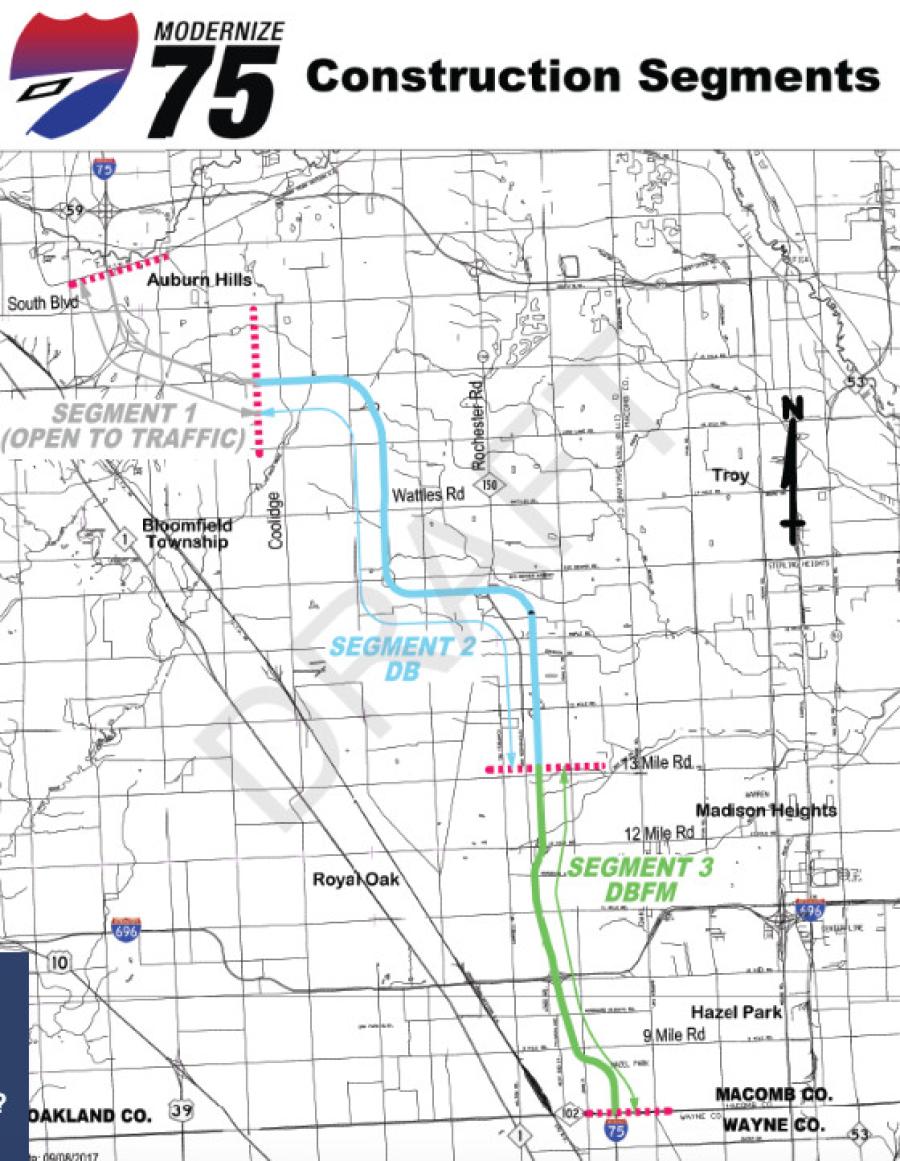 The rebuilding and modernization on 18 mi. of I-75 is expected to be completed a decade sooner than originally scheduled thanks to innovative contracting, according to the Michigan Department of Transportation (MDOT). The Oakland Corridor Partners team is the preferred bidder to design, build, finance and maintain the final segment of the project. The final cost of this segment, which is subject to adjustment prior to financial close, is currently estimated at $1.4 billion.

This segment consists of rebuilding more than 5 mi. of pavement, modernizing the freeway, and improving 28 bridges between M-102 (Eight Mile Road) and 13 Mile Road in the communities of Hazel Park, Madison Heights and Royal Oak. Also included is a safety upgrade that separates traffic entering northbound I-75 from I-696, and northbound I-75 traffic exiting at 11 Mile Road. Additionally, MDOT is constructing a 14-ft. diameter drainage tunnel between M102 and 12 Mile Road to separate and meter freeway water from the local storm system to mitigate future flooding concerns.

Using the design-build-finance-maintain (DBFM) contracting model allows for innovation and project acceleration. Similar to a public-private-partnership (P3), the team will be responsible for the cost of designing, constructing and maintaining this 5.5-mi. stretch. The DBFM procurement allows for the flexibility to fund the project with availability payments spread out over 30 years, enabling additional investments on other parts of the transportation system. Originally, this stretch of the modernization project was to be completed under traditional contracting that would have resulted in five separate segments. In addition, this procurement model requires the Oakland Corridor Partners to maintain this stretch for 25 years after construction is completed.

"The staff overseeing the creation of this unique contracting method worked tirelessly analyzing different options to determine that the DBFM model would provide the best project for Michigan in terms of innovation and delivery while meeting the project goals and objectives," said State Transportation Director Kirk T. Steudle. "In agreements that transfer maintenance responsibilities to a private party, the public owner benefits from guaranteed performance standards and long-term pricing that is locked in throughout the agreement."

Financial close on this contract is expected to occur by the end of the calendar year. Detailed plans on construction activities and timelines will be announced when information becomes available.