Mexico’s President Enrique Peña Nieto plans to announce the project to the Congress of the Union the morning of April 1 to overwhelming support. 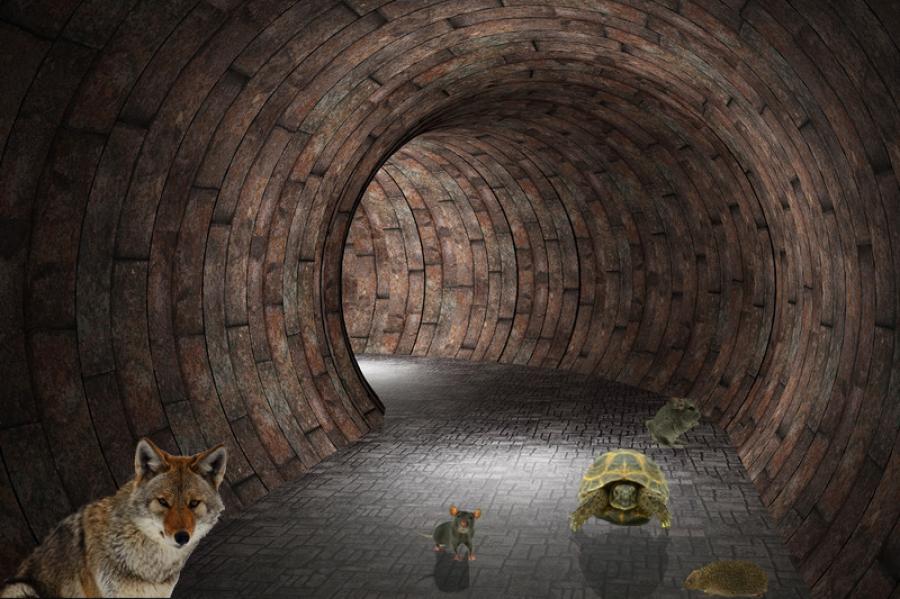 An integral feature of the wall will be wildlife-crossing tunnels located every mile along the wall. These tunnels, which will number 1,989, will measure three feet high and four feet wide, permitting armadillos, coyotes and other critters to pass safely along their migratory routes north and south of the border.

In a stunning reversal, the Mexican government has announced that it will build a border wall extending from California all the way to Texas — and pay for it.

Mexico's President Enrique Peña Nieto announced the $10.5 billion project to the Congress of the Union the morning of April 1 to overwhelming support. The construction of the wall, slated to begin April 20, is expected to take six years to complete and create tens of thousands of local construction jobs along the four-state border.

“We agree that border security is of utmost importance to not just America, but also for the Mexican people,” said Nieto. “Of course, we considered partnering with our friends north of the border on a project of this scope and significance, but it was ultimately determined that going it alone would show how passionate we are to keep ourselves separated for our mutual own good — to keep landscaping jobs in our country and American manufacturing jobs in theirs.”

Construction Equipment Guide (CEG) requested and received from the Mexican government preliminary specs of the wall and they are impressive. Spanning the 1,989-mile (3.200 km) border will be a 15-ft. (4.6 m) tall reinforced concrete wall, three ft. (.9 m) thick with another 15 ft. extending underground. The wall will be painted a light brown, matching the appearance of most of the landscape along the nearly 2,000-mile border. Local municipalities on both sides of the border will be responsible for overseeing their own graffiti.

An integral feature of the wall will be wildlife-crossing tunnels located every mile along the wall. These tunnels, which will number 1,989, will measure three feet high and four feet wide, permitting armadillos, coyotes and other critters to pass safely along their migratory routes north and south of the border. The tunnels also will feature LED lighting and air-conditioning.

“We felt that wildlife on both sides of the border should not suffer and have their habitats disrupted just because of a few bad manzanas,” said Secretariat of Environment and Natural Resources Juan José Guerra Abud.

When asked that these wildlife tunnels appear to be able to easily accommodate the size of an average human, the secretariat bristled. “Why would anyone want to cross the border? We have a very high quality of life here in Mexico, but if anyone has any concerns about humans using these tunnels, which, of course, are not designed for humans in any way whatsoever, then I'm certain the U.S. can guard these passageways, if they feel it's necessary. There are only 1,989 of them, so it's not that big a deal.”

Equipment on this massive job will undoubtedly play a significant and key role. So much so that a start-up manufacturer, based in Tijuana, has designed a new, Juan-of-all-trades, multipurpose machine that its maker predicts will be not just be a one-of-a-kind piece of construction equipment, but also the only one actually working on the entire project throughout its duration.

Tentatively called a Medusa, the machine is a combination loader, excavator, paver, with crushing, screening, lifting, concrete mixing and compacting capabilities. It also features two air-conditioned cabs, each with WiFi and GPS-guided controls.

“As we were designing the Medusa, we knew that we needed a special machine for a special, but very challenging project,” said Rolando Chong-Marin, founder of Alucinación Inc., the Medusa's manufacturer. “We knew that this wall had to be built as soon as possible, so we felt the pressure from the Mexican government to come up with something that could expedite construction. What better way to do that than having two men operate it at the same time. Communication between the two operators shouldn't be a problem.”

In his concluding remarks to the Congress of the Union, Nieto said the wall and this project would far exceed the magnitude of any project in the country's nearly 200-year history. “This will trump anything that we have ever accomplished as a country and it will stand as a hulking monument symbolizing Mexican ingenuity and the deep understanding and cooperation between the United States and Mexico.