Middletown Combines Two Projects Into One With Single Prime Contractor 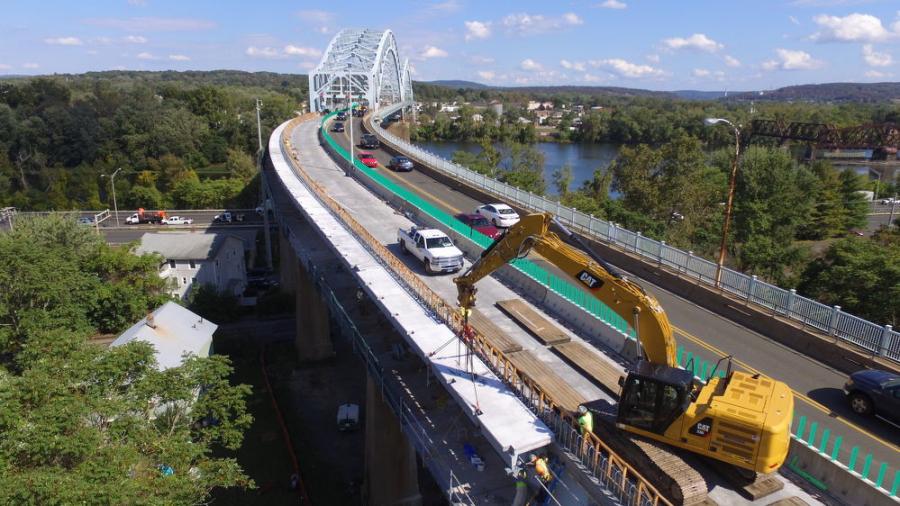 The $46 million undertaking in Middletown/Portland is the result of a 2010 safety report, which found deficiencies in the structure’s two main arch spans.

Phase II work is under way on the Connecticut Department of Transportation (CTDOT) Arrigoni Bridge project. The $46 million undertaking in Middletown/Portland is the result of a 2010 safety report, which found deficiencies in the structure's two main arch spans. Construction is taking place simultaneously with the Saint John's Square/Main Street intersection operational improvement project in Middletown. 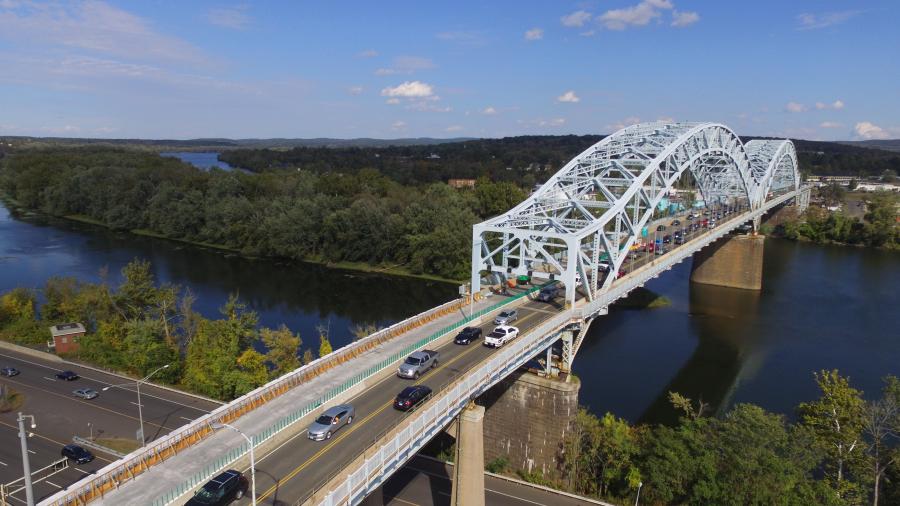 "Both project limits abut each other," said James Vincenzo, CTDOT transportation supervising engineer. "Due to the possibility of conflicting traffic patterns and the need for constant project coordination, it was decided to combine both projects into one contract, in order to have one prime contractor coordinating work on both projects. This reduced the probability of contractual and construction conflicts during construction."

The bridge's two center spans were replaced in 2012, as Phase I of the bridge rehabilitation; a Phase II effort was required to complete remaining rehab work, which included the replacement of the approach deck spans.

Replacement of the Arrigoni approach spans will be completed in three stages. Traffic is reduced from two lanes in each direction to one lane in each direction during all stages. Work zones will be protected with temporary precast concrete barrier curb. The contractor must complete the three stages within 540 days from the time traffic is first impacted.

Vincenzo noted that cold weather paving and concrete plans are necessary to meet the project specification requirements and aggressive project schedule. Heating may be required to provide a proper concrete curing environment.

Stage 1 demolition of the existing deck and parapets has been carried out. Stage 2 and 3 demo remains to be completed. Class S concrete substructure repairs also have been ongoing, which requires the sounding of substructure elements to determine areas of deterioration that require repair.

The earth excavation quantity was estimated at 3,077 cu. yds. There are additional items on the project that include excavation.

Temporary precast concrete barrier curbs are anchored to the existing bridge deck in staged construction. Debris shields are installed prior to demolition, along with all safety appurtenances in accordance with OSHA regulations.

During construction, existing pedestrian rail and light standards are removed, followed by barrier curb, sidewalk and sidewalk struts and brackets. The bridge deck can then be sawcut, removed in sections and hauled off. After deck demolition, structural steel repairs are completed, along with deck forming, shear connector installation, rebar installation and low permeability concrete placement.

After proper curing time, cold applied elastomeric concrete membrane is installed followed by pavement courses. Deck replacement must be coordinated with the replacement of the barrier curb, sidewalk and railing installation.

The substructure must be sounded to determine areas of concrete deterioration. Deteriorated areas are removed to sound concrete, and class S concrete repairs are completed. There also are numerous substructure steel repairs being performed in deteriorated sections of substructure components. 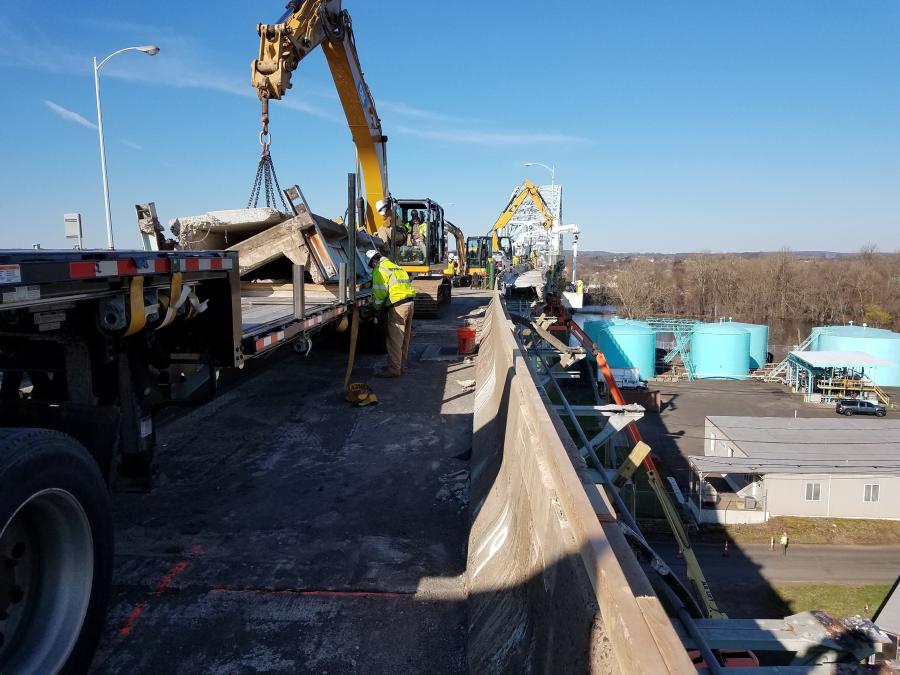 Temporary precast concrete barrier curb allows for staged construction to occur in a safe manner. The TPCBC is anchored to the existing bridge deck and separates traffic from the work zone during deck reconstruction.

According to CTDOT, the bridge exemplifies the long-span bridge engineering of the first half of the 20th century. Because of the growing need to provide uninterrupted highway passage over large bodies of water, engineers were called upon to design large cantilevered trusses, suspension bridges and steel arches. Innovative erection methods, the availability of very large structural components and special metals all contributed to the development of long-span bridge technology.

Almost a third of the bridge used high-strength silicon steel, and the structure was almost entirely erected by building the arches outward from the center pier, letting them balance each other as they were extended over the water. Another interesting feature is the use of chains of huge eyebars under the roadway that tie together the ends of each arch. The tied-arch technique resisted the outward horizontal thrust of the arches and allowed the piers to be much smaller and more economical.

As for the St. John's Square and Main Street construction, it involves carrying out the geometric realignment of the intersection to improve safety and operational efficiency.

"The proposed work included the addition of two turn lanes on St. John's square westbound," said Vincenzo. "Widening occurred on the southbound side, in order to incorporate the two new lanes, as well as a proposed median island. In addition, geometric improvements were made to the intersection by way of median islands on Main Street that will serve to normalize the alignment."

Work on the project, which is funded with a combination of federal and state funds, began in February 2020. The anticipated completion date is early 2022. Construction is currently on schedule and within budget.

According to Mohawk Project Manager Tim O'Connell, the project is an ideal fit for his company.

"With over 50 years of bridge construction experience, Mohawk Northeast is ideally suited to complete the Arrigoni Bridge reconstruction project. Having completed numerous projects with similar features, such as a tight schedule, heavy traffic congestion and limited/restricted site conditions, Mohawk has proven itself to be a leader in the industry."

O'Connell added, "We have a strong working relationship with the DOT, and understand what it takes to complete a project of this nature. Many of our workers live in the area and/or travel across this bridge daily. When working on such an iconic bridge so close to home, there is a sense of pride taken in our workmanship. We have the equipment needed to complete the project, along with the experience to give Connecticut a bridge that will last for years to come." CEG