Mike Rowe Sits Down for an Interview With CEG

The "Dirty Jobs" star discusses his Work Ethic Scholarship program and much more at ConExpo-Con/AGG 2017. 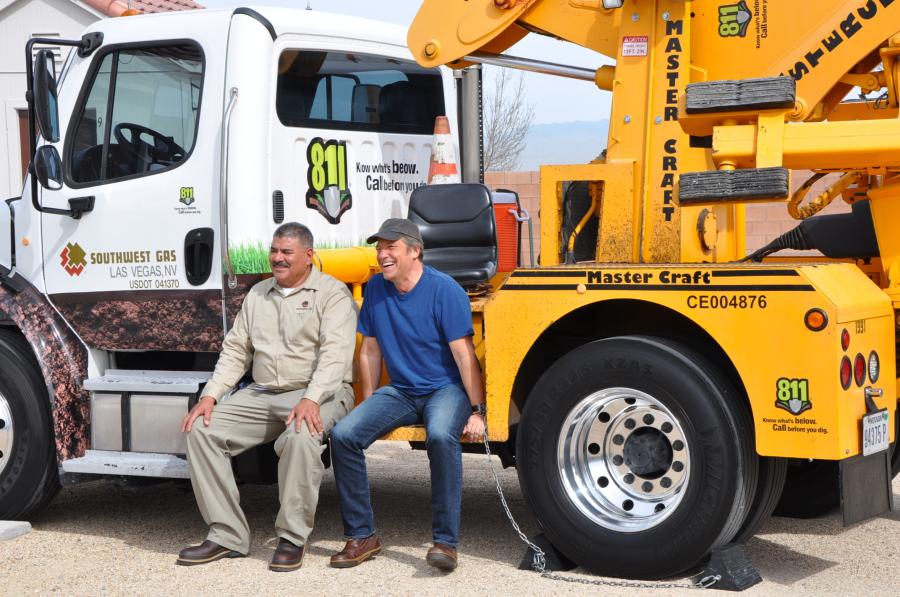 Mike Rowe, known by many as the host of Dirty Jobs, as well as a tireless advocate for the construction industry, stopped by ConExpo 2017 as part of his latest effort to promote the National Excavator Initiative.

The program is a foundation dedicated to reaching excavator operators and contractors with safe-digging messages, especially the importance of contacting an 811-notification center before digging.

After his presentation, Rowe sat down for an exclusive interview with Construction Equipment Guide (CEG) where he discussed the need to fill the skills gap, as well as the work his foundation and others are doing to help. According to Rowe, several “myths” about the construction industry have contributed to the skills shortage that exists today, including the perception that children should not be encouraged to pick up skilled trades.

When it comes to raising children and talking about meaningful work, he said parents and educators want to have a plan or a playbook, however, there isn't one, so they push children toward careers that have been deemed more appealing. Meanwhile, thousands of high-paying jobs are being left on the table because parents are worried their children won't be happy.

So, what can be done to change this perception? Rowe said it starts by “making work fun again.” It's personal, he said. For example, one person might like certain books, TV shows and food while another doesn't. That decision can't be forced on someone, but it is done with work.

Dirty Jobs did what no other show before it did: shine a spotlight on other options. Rowe said that he never went out to change peoples' minds about the jobs, but simply, to show people and help them understand that these jobs are essential. What would the world be like without brick layers? Rowe had a simple answer — we would be living in straw houses.

Rowe's involvement with the industry goes beyond his work on Dirty Jobs. During his most recent appearance before Congress, he advocated for the promotion of skilled trade opportunities in connection with revamping the Perkins Act, which aims to increase the quality of technical education. Rowe used Skills USA, an organization supporting students who want to get involved in technical, skilled and service occupations, as an example of one of these opportunities. He said what impressed him most when he first learned about Skills USA was its willingness to pick up the slack when vo-tech programs were pulled from high school curriculums. Alternatively, he was dismayed that few knew about the program, which stems from a fundamental problem about these initiatives.

“Part of what I said to Congress was that we need to shine a light on organizations like Skills USA and Project Jumpstart in Baltimore and many others who are doing something that's moving the needle. People need to know about it,” Rowe said.

Project Jumpstart is a 14-week intensive construction-training program started by the Associated Builders and Contractors of Baltimore to address a shortage of workers and employs both classroom and on-the-job training. The program has trained those deemed unemployable by helping them overcome obstacles to success, such as a lack of a vehicle, and providing stipends while they train, which can be lost if they violate the rules (using their cell phone in class, coming to class late, etc.). The program provides real-world consequences to train students for real-world jobs.

In addition to working with Congress, Rowe also raises awareness for the industry and the skills gap through the mikeroweWORKS Foundation. His organization of which he is CEO is a charity that raises money for the Work Ethic Scholarship Program. These scholarships are awarded to people who are willing to be trained for jobs in fields that are seeking skilled workers. To date, the foundation has granted more than $3 million to trade schools around the country, according to the web site.

Recently, mikeroweWORKS caught the eye of Eric Thorkilsen, CEO of This Old House Ventures LLC, producers of the PBS series This Old House. Rowe said This Old House is on the leading edge of the skills gap. The show already had a PR campaign regarding skilled jobs, but Thorkilsen wanted to expand on that and started a scholarship program, Generation Next.

Thorkilsen was looking at various programs to model Generation Next after when he landed on Rowe's own initiative, mikeroweWORKS Foundation. After meeting with Rowe and learning about this program, Thorkilsen decided rather than imitate Rowe's success, it would make more sense to join forces.

So far, Generation Next has raised $500,000 for mikeroweWORKS, which is giving the money away in the form of Work Ethic Scholarships. In addition, Rowe said that the house for This Old House's 2017-2018 season will be sold and all profits will benefit the mikeroweWORKS Foundation.

Rowe also has raised thousands of dollars for mikeroweWORKS by making it personal. In addition to speaking to Congress and working with This Old House, he has gone as far as to sacrifice his own pants and other personal items for his “Collectibles Rare and Precious” (C.R.A.P.) auctions to benefit his foundation. He said it's one way to make a topic like closing the skills gap more accessible. In the case of his pants, Rowe said that Judy Muche of The Quilt Cabinet reached out to him with a desire to help his foundation, so he sent her eight pairs of pants. She made quilts, bags, earrings and all kinds of crazy stuff, according to Rowe. In the end, the auctions raised tens of thousands of dollars.

One of the reasons his desire to help the industry is so personal for Rowe stems back to his childhood. He said after watching his grandfather as a child, he was certain he would follow in his footsteps.

“I was wrong, not because I didn't want to, but because the handy gene is recessive and I didn't get it,” he said. “What I got was an appreciation for the work, and to this day, I see this magic,” he said.

While he couldn't cut it in the skill trades, Rowe said he did eventually get to the point where he could sell a show, Dirty Jobs, which he sees as an exhibition of his appreciation for the trades and hard work, in general.

During his time on Dirty Jobs, Rowe had the opportunity to operate a variety of equipment, and reminisced about some of his favorites, including an electromagnet attachment, which he used to pick up cars. Other favorites included a heavy-duty excavator and a truck with “two-and-a-half-story tires.”

“People toss me the keys to anything. I flipped a Bobcat skid steer once,” he said. “I was in Alaska cleaning up an oil spill in snow, so we were just scooping up all the petroleum soaked snow and flipped the thing right over. It was exciting. Another guy asked me on camera once, 'can you fly a helicopter?' I'm like, 'I never tried.' He said, 'do you want to try?' People were like, 'we are on TV, it's Discovery, what could go wrong?'”

Rowe said there was absolutely no playbook for Dirty Jobs, which surprised people.

“It showed hundreds of people doing jobs that we were told were no good, having a great time. It challenged the existing expectation,” he said.

The mikeroweWORKS Foundation and Work Ethic Scholarship is a continuation of that effort — to shine light on “dirty” jobs and get the word out that there is more than one path to success.

The 2017 Work Ethic Scholarship opens for applications on March 20.

For more information about mikeroweWORKS and how to apply for the scholarship, visit mikeroweworks.org/scholarship.

Recently, Mike Rowe has released 'The Way I Heard It', a weekly five-minute podcast of bite-sized mysteries for the curious mind with a short attention span.