Mississippi to Complete I-20 Bridge Replacement, I-55 Junction in 2022 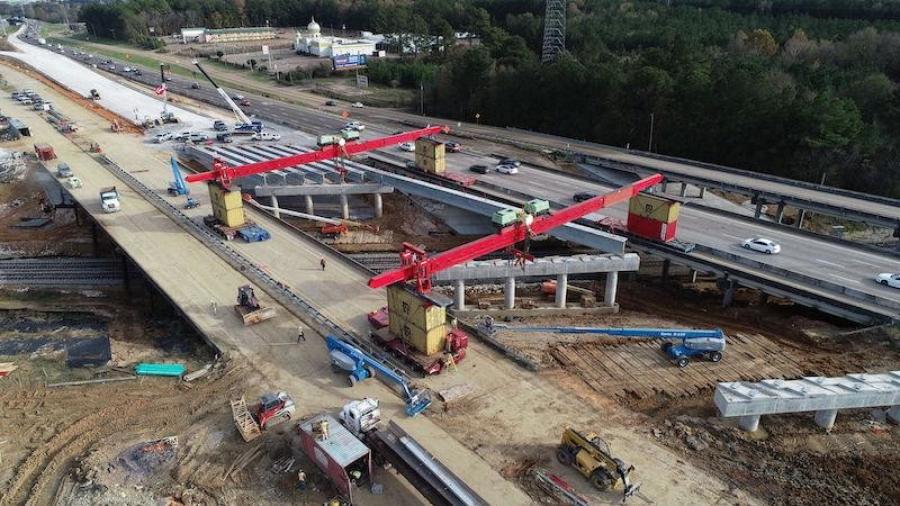 Mississippi is planning to complete two big highway projects in Rankin County — the $253 million expansion and overhaul of 7.5 miles of U.S. Highway 49, and the $42 million replacement of the bridges at the junction of Interstates 20 and 55 in the state capital city of Jackson — during the summer of 2022.

The Mississippi Department of Transportation's (MDOT) Central District Transportation Commissioner Willie Simmons told The Northside Sun, published in Jackson, that relieving congestion in the city's metro area is vital and several projects, both ongoing and proposed, will help.

The $42.2 million bridge replacement effort on I-20 eastbound between Terry Road and Gallatin Street in Jackson is continuing to make progress, according to Simmons. The new freeway spans U.S. Highway 51, I-55 southbound, and the Canadian National/Illinois Central Railroad.

In addition, the project includes widening along I-20 eastbound and I-55 northbound for the new bridge, roadway realignment and ramps, according to the Sun. Other work includes slide repairs, slope stabilization along the railroad and traffic sensor installations within Hinds and Rankin counties.

Over the last few months, crews from Key Constructors LLC, of Madison, Miss., the general contractor, placed the bridge's pre-stressed concrete beams before pouring concrete for the bridge diaphragms and decking. Following that, soil cement treatment got under way, along with asphalt paving on the new and existing I-20 eastbound roadways. The construction of slope revetment and installation of electrical components also occurred on the $42.2 million project.

Simmons, a former Mississippi state senator and Senate Transportation Committee chair, described the U.S. 49 project as one that has been plagued by drainage-related issues caused by excessive rainfall. Data from the National Weather Service shows 2020 was the fourth-wettest year on record in the Jackson area with 73.62 in. of rain.

All the precipitation last year forced the contractor, Jackson-based W.G. Yates & Sons Construction Company, and MDOT to make crucial decisions about the project.

"We had an excessive amount of rainfall that created a drainage problem in that area," he noted, adding that the situation made the soil so difficult to manage that building on top of it was impossible to do in a normal fashion.

"We had some choices we had to make on the drainage," he said. "Do we go wider and deeper? It would create a serious problem for the businesses up and down that stretch."

Simmons said the normal sand and rock was omitted from the project plans in favor of a special kind of stone which enables the drainage system but comes at tremendous cost and delays.

The Northside Sun reported that, according to Simmons, the project is now 85 percent fully funded.

Phase III, which includes bridge, median, roadway and drainage work, remains under way. Most of the Phase III work north of Cleary Road is complete. During Phase IV, the final piece of the puzzle, all paving and striping will take place. Once complete next summer, U.S. 49 will include three travel lanes and a shoulder in each direction.

"Motorists are now seeing lots of progress on the reconstruction of U.S. 49 in Rankin County," said Simmons. "Just looking at the traffic flow and the new lanes that have been constructed, it's going to be an improvement and eliminate a lot of the traffic jams going into Jackson and into the Stack."

Long-term projects that the three-member MDOT Commission are contemplating include a four-lane west corridor that would connect I-55 at Crystal Springs with I-20 near Vicksburg using Mississippi Route 27 and added lanes to both interstate highways.

"We have a lot of traffic that comes through the city of Jackson," Simmons said. "On top of that, you have the Gulf Coast traffic [traveling in] on U.S. 49, and the [Mississippi] Delta traffic on U.S. 61. When you put that together in the capital city, you have a growth and a capacity problem."