MnDOT Untangles Can of Worms 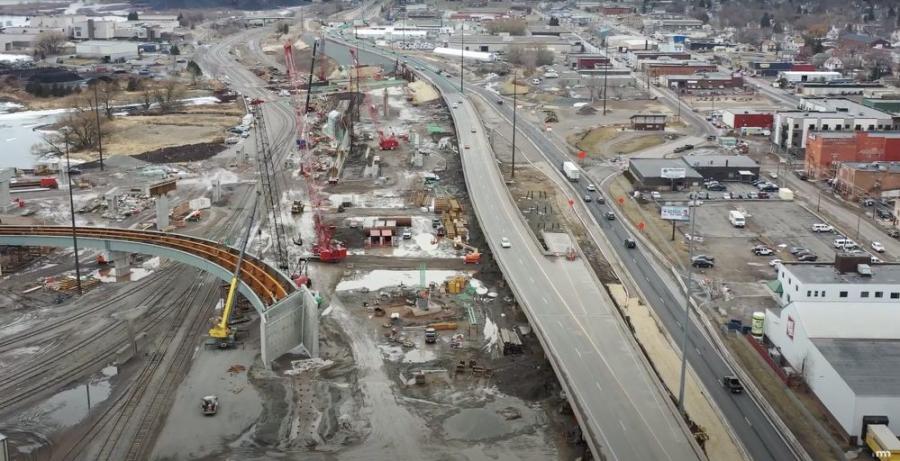 Located just west of downtown Duluth, demolition and construction is now under way to unravel the outdated and hazardous road movements. (Minnesota Department of Transportation image)

Minnesota Department of Transportation (MnDOT) designers opened the proverbial "Can of Worms" when they began designing a new road alignment for a busy, high-volume interchange connecting three major highways in Duluth, Minn.

Officially known as the Twin Ports Interchange (TPI) project, it is known locally as the "Can of Worms" because three high-volume highways — I-35, I-535 and HWY-53 — converge in a dizzying array of three roadway levels and ramps that split, twist and rise up and over each other to shoot traffic out in all directions of the compass.

Today's engineers had no other options. After 60 years of service, the interchange had to go. 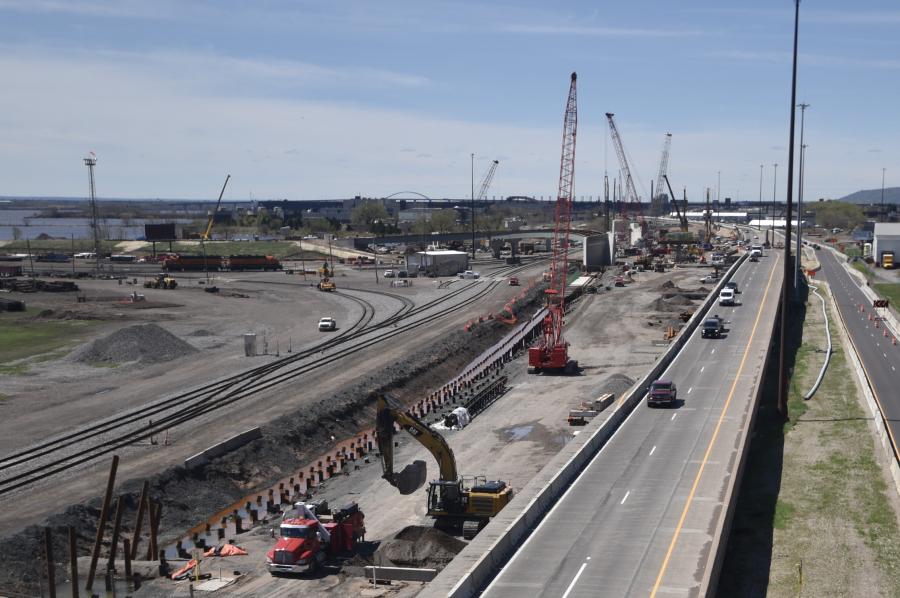 In a survey conducted by MnDOT as part of the ADR, the daunting road gymnastics of the interchange led one respondent to note, "the merge from southbound I-35 to northbound HWY-53 is particularly hairy. I've had more than one close-call due to lack of visibility at that merge."

Located just west of downtown Duluth, demolition and construction is now under way to unravel these outdated and hazardous road movements. The new road will feature an innovative roadbed design and it is a project filled with many components.

Along with bringing improved geometrics to the traveling public, the new bridges and ramps are designed to carry the oversize overweight (OSOW) freight loads coming off the cargo ships.

MnDOT awarded the $343 million contract to the joint venture team of Ames Construction, based in Burnsville, Minn., and Kraemer North America, headquartered in Plain, Wis., with the construction management general contractor (CM/GC)

The city of Duluth and its twin port Superior, Wis., are a direct link through the St. Lawrence Seaway and Great Lakes to the Atlantic Ocean, 2,300 mi. away. With that statistic, these ports host the unique distinction of the furthermost inland international shipping ports in the world, according to the Duluth Seaway Port Authority web site.

When substantially completed in 2023, the interchange will be reduced to two levels, left exits will be eliminated, merging distances will increase and new bridges will be built to carry OSOW freight loads.

Though work on the freeway began in the spring of 2021, Duluth residents and visitors had a preview of work to come nearly two years prior when utility relocations and local road improvement construction began in preparation to accommodate the new freeway alignment.

Just the utility adjustments and road upgrades prior to any actual construction on the project itself were immense.

Thousands of feet of sanitary sewer and storm sewer and communications lines have been moved to make room for new bridge abutments and retaining walls, including the relocation of a sanitary pump station.

After backfilling the street cut, crews pumped up and strengthened the road surface with layers of asphalt. It is now a bypass for thousands of daily vehicles for southbound I-35 traffic to allow road and bridge crews to work in the existing freeway lanes through this stretch of the highway.

Once traffic moves back to the new road, this street will undergo a complete reconstruction in 2024.

Challenges abound on this project, and it is one packed with many elements. 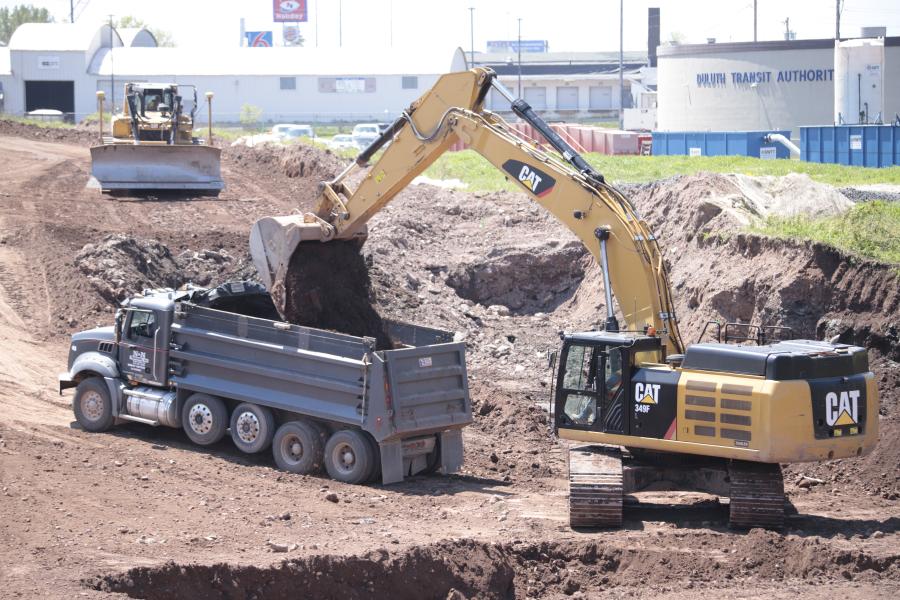 From the design side of this project, the topography here is dramatic and notable for its steep road grades. The urban core of Duluth and the project are hemmed in by the St. Louis Bay of Lake Superior on the south side and an 800-ft. bluff to the north. Designers had to work around the steep topography as much as possible to flatten the curves and road grades.

Geologically, 2,200 linear ft. of the existing mainline of 1-35 was originally constructed on low lying bridges because the road runs through acres of land that sits on coastal wetland and historically was an industrial area filled with contaminates. Once industry moved out of the area and buildings were leveled decades ago, it became an unregulated dump site.

This time around, the new highway will be constructed on the ground with the road-bed design that requires thousands of grout columns supporting a geo-grid to bulk up the poor geology and support a highway carrying 80,000 vehicles per day.

From the construction side of the project, every piece of concrete, asphalt and bridge structure must be removed and replaced under traffic conditions.

Road and lane closures, detours and traffic switchbacks alone are complex and a juggling challenge for traffic engineers to stay one step ahead of construction crews. In September 2021, a major milestone in traffic management was met when crews switched southbound I-35 traffic onto Lower Michigan Street in Duluth to give demolition crews a free reign on the northbound lanes to begin bridge demolitions.

Concrete recycling is huge on this project. All the concrete from road and bridge demolitions is crushed on site and recycled as part of the new base for mainline I-35.

To bring this project to an end, the construction team alone will move approximately 30 pieces of heavy equipment in and out of this site including 150-ton Manitowoc cranes; 150-ton MLC and American cranes; and Tadano Mantis and Grove hydro cranes. A variety of Cat excavators, dozers, loaders and graders are on site for excavation and grading operations.

Sub-contractors will move in dozens of pieces of additional heavy equipment during the three-year project.

Despite these challenges and working around Covid impacts and some late material shipping, construction has been going well.

"Overall, the project has been going well. We have a lot of talented people on the team up here between the Ames-Kraemer joint venture, MnDOT and the designers and the city of Duluth. Everybody has done a good job," said Matt Huber, Kraemer North America structures construction manager.

"Everything is going well. We have a good team atmosphere between MnDOT and the contractors. I'll credit the contractors for being a part of the design which was instrumental in fostering that relationship," Marthalar said.

Both Marthalar and Huber agree that the geology corrections have been one of the biggest challenges on this project and led designers to take a different approach to the traditional roadbed design.

"Historically this was an industrial area filled with contaminated soil and structurally deficient soil and it also sits on a coastal wetland area," said Marthalar. "What we're dealing with here is material that doesn't have much structural capability. Because it is a coastal wetland area it has a lot of organic material in it and a lot of different strata from sand to organics with a high-water table.

"With the geotechnical issues we have here we can't put the highway on the ground like the typical highway or it would fall apart in short order. The solution we went with is to install grout columns into the soil down to a competent elevation layer. Then we will place a reinforced load platform on them composed of alternating layers of aggregate and geo-grid to a specified thickness.

"This is the base for the roadway," Marthalar said. "Then we will put in the roadway, storm sewer; everything you might need for a typical roadway."

The contaminated soil dominates the environmental controls on this project and features a temporary water treatment system that has been running while crews worked through the cold and raw winter season.

"The contamination is always difficult to work with; just making sure we handle and manage it in the proper way. Between the contaminated soil and the contaminated water that goes along with that, all the water is sent through a temporary treatment system before it goes to the Western Lake Superior Sanitary District [WLSSD]. We have the de-watering system up and running full time pumping 400 gallons per minute." With nearly two miles of temporary pipe placed, "This causes a challenge in the winter trying to keep the water from freezing and maintaining the flow in the pipes," Huber said.

The secondary components of this project led to further challenges and complex construction stages.

Besides very limited lay-down and storage space and complex earth retention staging sequences to keep ramps open as bridges came down, one of the most challenging elements was the construction of a box culvert.

This culvert is combining two, existing trout streams into one at and under I-35 and a set of nearby railroad tracks to empty into the St. Louis Bay. The new, combined stream will add capacity and ease future flooding.

Here, construction on a four-cell cast-in-place box culvert, 505 ft. long and 56.5 ft. wide, has continued through a very raw and cold winter and under live traffic conditions. The complexity lies in keeping I-35 and the nearby railroad tracks open to vehicular and train traffic while culvert construction continues below.

Just this piece of the overall project was an immense and challenging undertaking and a project with a one-year construction schedule.

"To build the earth retention system is challenging because the footings are under water, so we had de-watering going on all winter. The weather has been an issue," Marthalar said.

Elaborating further, Marthalar said the installation and constant shifting of steel piling and timber lagging to support the infrastructure above as construction progressed required 12 construction stages and excavations 50 ft. deep. 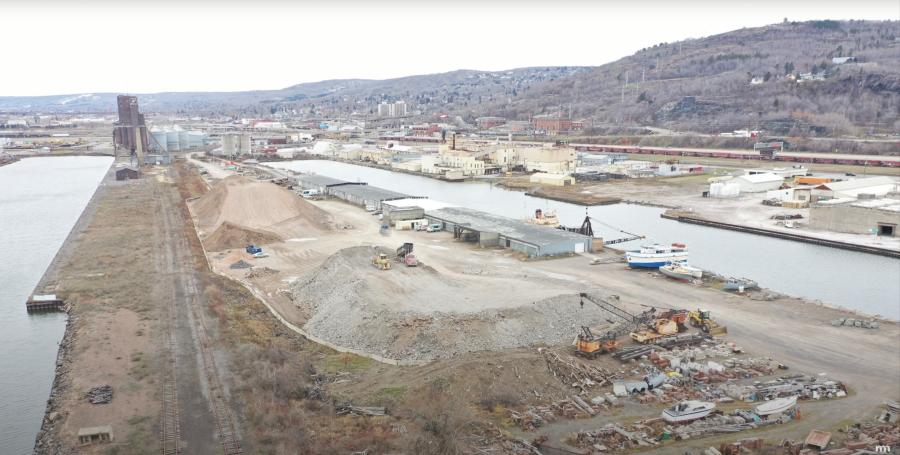 Along with these challenges, for Huber it's the large scale of the project that has been interesting.

"Just being able to work with the owner then also being integrated with the city of Duluth and the BNSF railroad and just seeing how all parties can work together to make this project progress and go well has been interesting," he said.

"The challenge of the geo-technical side of things is interesting and unique because you don't see a lot of that. Trying to figure it out because we don't have a lot of back history on the soil," said Marthalar.

"It's a lot different from previous projects we've seen not just for me, but the designers and MnDOT. Just being able to work through these challenges has been interesting," Huber said.

Work on the remaining road configurations will continue into November 2023. CEG