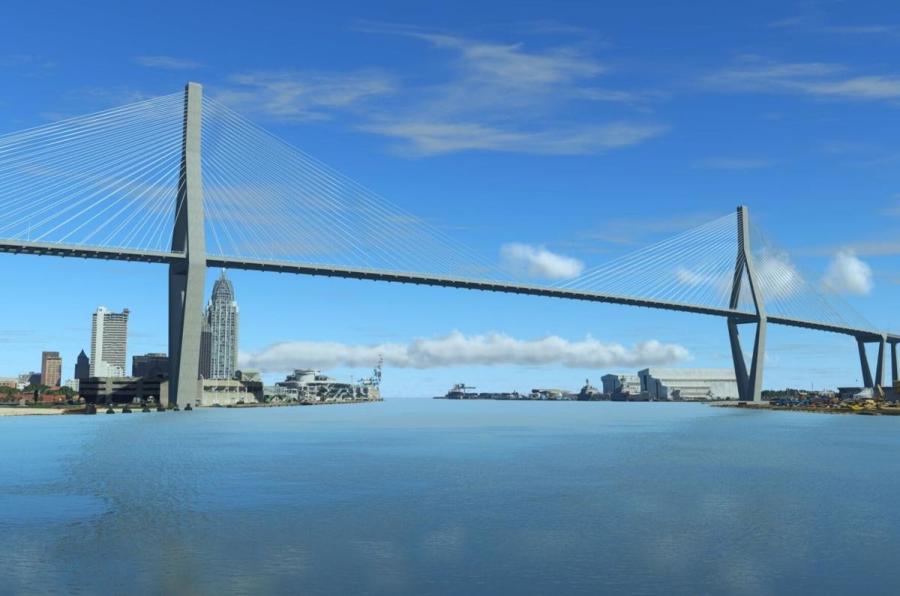 The new $725 million bridge project will include a “truck-only” bridge to be built over or around the Wallace Tunnel to ease congestion and reroute hazardous cargo.

The Mobile River Bridge and Bayway project is one of those good news/bad news situations.

The good news to report is that the long-discussed project is now back on track to be built, after local officials balked at putting tolls on its usage in 2019. The bad news, which may not come as too much of a surprise, is that folks should not expect its construction to start right away.

The long-desired span to alleviate traffic on the congested Interstate 10 Bayway got new life earlier in June when both the Mobile Metropolitan Planning Organization and the Eastern Shore MPO voted to put the project back in their Transportation Improvement Plans. The Eastern Shore MPO had been the one to pull the project in 2019 over objections to proposed tolls.

Now that the project is part of their plans, the Alabama Department of Transportation (ALDOT) can complete the necessary studies to have the project approved. ALDOT has said construction on the bridge could start in 2022 or 2023 and it would take about four years to complete.

The new $725 million bridge project will include a "truck-only" bridge to be built over or around the Wallace Tunnel to ease congestion and reroute hazardous cargo. Secondly, the I-10 Bayway will be restriped to add a third lane in both directions, one of them for truck use only.

State and local leaders are under the gun to nail down details by September 2022, the deadline to use or lose a $125 million federal grant, Mobile's FOX10 News reported.

According to the TV station, Kevin Harrison, director of transportation of the South Alabama Regional Planning Commission said that he and other local officials now have a path forward to get the initial phase of the project constructed. He added that the next step — the big obstacle that has confounded public officials for 25 years — is figuring out how to pay for it.

He noted the possibility of getting more federal money from President Joe Biden's massive infrastructure spending proposal. Currently, the House and Senate are working on different versions of a long-term transportation funding plan.

"The time is right to go after some of these federal funds," Harrison said.

The original plan for a new, $2.1 billion Mobile Bay Bridge project was designed as a twin-span bridge and a new, wider and higher Bayway. But local leaders nixed that idea after residents complained about a proposed toll on both the new crossing and the existing Wallace Tunnel.

The latest iteration of the bridge project involves breaking its plan into three phases. Local leaders must also find a way to secure enough federal funds to do it all at one time. Regardless of when that happens, the plan calls for starting the project with a single span of two lanes in each direction, starting at Virginia Street and connecting to the Bayway. Restriping on the Bayway would mean a reduced speed limit as well.

The second and third phases of the Mobile River Bridge project would add a second bridge span to allow for four lanes in each direction and a new, elevated Bayway with an equal number of lanes.

Harrison told FOX10 News that the project could be in line for additional funding if it makes a list of the nation's top 10 highway choke points, due to its daily traffic congestion. A study in 2017, though, indicated that the I-10 bridge barely ranked in the top 200, but Harrison said that that examination relied on GPS data collected from trucks.

FOX10 News reported that he questioned the veracity of the statistics collection by pointing out that when trucks go through the Wallace Tunnel, their GPS signal is lost, resulting in "bad data."

Without additional money from Washington, the funding sources are $125 million from the existing federal grant, $250 million from Alabama state funds, and $300 million to be financed through a toll of $10 to $15 on commercial vehicles using the new bridge.

The current idea is that residents would be able to continue using the Wallace Tunnel for free, while large commercial trucks would be barred from accessing the tunnel. The trucking industry has objected, arguing that it would be unconstitutional.

Alabama Trucking Association President Mark Colson told the Mobile news outlet that the bridge is needed but that it must be financed another way.

"The trucking industry under the truck-only toll is being asked to put up, basically, the same amount of money as the state and federal governments combined," Colson said. "I don't think anyone would think that makes sense."

Colson acknowledged, though, that there are no easy solutions to the project's funding issues.

"Here's the reality: Things cost money," he told FOX10 News. "Money doesn't grow on trees. We all know that. But the federal government, the state government and stakeholders have a responsibility to find a solution that will bring the project to fruition."