The project's main goal is to remove roughly 1 million cu. yds. of tailings and mine waste to protect human health and the environment by minimizing direct contact with contaminants. 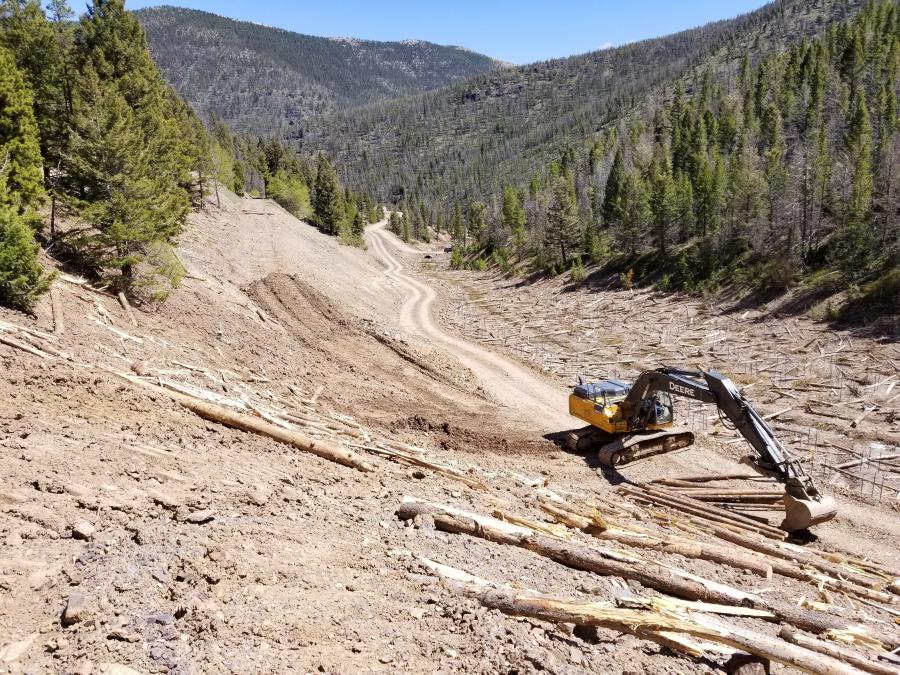 The project’s main goal is to remove roughly 1 million cu. yds. of tailings and mine waste to protect human health and the environment by minimizing direct contact with contaminants.

Upper Blackfoot Mining Complex (UMBC) officials are reflecting on work already completed as part of the $47.2 million effort. The project's main goal is to remove roughly 1 million cu. yds. of tailings and mine waste to protect human health and the environment by minimizing direct contact with contaminants.

“It took a lot of work securing a settlement, a commitment from state and federal agencies to make this project a priority, and a focus on what is in the best interest of Montana, its people and environment.”

In 1941, the Mike Horse Dam was built across Beartrap Creek to contain flotation mill tailings. In the mid-1970s, heavy rains caused a partial failure of the dam and high creek waters eroded contaminated tailings into Beartrap Creek and the Upper Blackfoot.

The state superfund facility, located roughly 15 mi. east of Lincoln, has been a concern for years. Seeps from tailings — the materials created during the processing of the ore rock — and waste rock dumps, along with acid mine drainage from old adits, have contaminated surface water, sediments, soils and groundwater. In 2005, a safety report deemed the dam unsafe, and recommended it be removed from service. Officials called for the removal and disposal of the dam, mine tailings and wastes.

Last spring, DEQ halted work on the project to reevaluate the draft bid package for the final phase of work. Work is expected to resume in spring 2018. The goal is to finish most work by the end of the 2019 season, with minor tasks extending into 2020. Construction of the repository began in 2013, with tailings removal starting the following year.

“I have great pride in the work the crews have done so far,” said Haaland. “They have accomplished an amazing amount of work, under some very difficult conditions.”

To date, almost 700,000 cu. yds. of tailings have been hauled to the UBMC repository. The tailings impoundment has been completely removed, and about 3,500 ft. of Mike Horse Creek and 2,100 ft. of Beartrap Creek have been rebuilt. Both creeks are running in the valley bottom for the first time in decades. Infrastructure at the water treatment plant has also been upgraded and replaced.

Regarding the removals and placement in the repository, the work can best be described as a sensitive and detailed process. Removals consist of excavations to either design depths or noticeable changes in materials.

“This requires working with the operators to identify these relevant changes, so they don't over-excavate. The area is then tested by the engineering oversight with a field-portable x-ray fluorescence machine to determine the metals levels. If the area is still contaminated, additional removals are done. Otherwise, the area is deemed 'clear' and the excavation moves forward.

“Work at the repository consists of trucks dumping the material, it being pushed out in lifts, rolled, then tested with a 'nuke' gage, similar to any other structure foundation. Coordination and communication are essential for both of these operations to work without slowing down progress.”

As for subgrade, subdrain and storm water management, “The upside of working at the Continental Divide is that the majority of our subgrade is rock. That has its downside when the rock is so hard it is necessary to jackhammer it with an attachment on the excavator because it will tear an excavator bucket apart, or when the rock is highly mineralized and can leach metals into your newly built floodplain. But generally, aside from the mine shafts, and the tailings in the impoundment, we have not had to worry about subsidence or weak subgrades.”

Understandably, crews are ever mindful of the elements.

“We are a place of extreme weather conditions. There were two events that completely overwhelmed all of our storm water controls. One was when I got to see water run uphill and the place look like Christmas in August during a severe hail and thunderstorm. The other was when it rained seven to nine inches on Labor Day weekend, filling the excavation in the impoundment area. Several feet of water built up behind the already saturated sands of the impoundment, and one of the crew members spent the weekend pumping the water from the excavation to our sediment ponds to keep the dam from failing.

“We are working in a narrow valley which seems to catch every storm moving over the mountains,” said Haaland. “Weather determines when we start and finish every season, and how much we get done within whatever limited season we are given. Fire conditions, severe thunderstorms and lightning, hail, incessant rain, snow, below freezing conditions, and extreme temperature changes have all occurred in the last four years since construction started.”

In 2008, state and federal officials announced $39 million in funding from the ASARCO LLC bankruptcy settlement to remove the dam and the contaminated tailings, and to clean up and restore portions of the complex. However, securing enough funding to complete the work is a significant issue.

Jenny Chambers, administrator of DEQ's waste management & remediation division, noted, “We're optimistic that through close cooperation with our project partners we can continue to move the project forward. We're already working to identify potential cost-savings options and design considerations to maximize use of remaining funds.

“This has included reviewing and revising the logic applied to excavation of waste, placement of back fill, restoration of the stream channel and associated environment,” said Chambers. “Some of the key strategies under consideration are reducing the amount of back fill necessary to create stream channel and overbank areas by placing less fill in areas furthest from the channel, reducing the amount of planting and type of planting and using only woody debris from the drainage.”

Main materials being used during construction have included a geogrid drainage layer, non-woven geotextile, gravel bedding, piping and concrete manholes. Equipment includes excavators ranging from a mini excavator to a 330 Cat/470 John Deere. Crews also have used D8 and D6 dozers, semi trucks and side dumps to transport material and 30-ton articulated haul trucks to move excavated material to load out when the semis couldn't access areas because the valley was too narrow or the material too unstable.

Haaland said input from the community has been invaluable during the course of construction. Feedback is used to keep everyone safe and minimize the impact of work on the public.

“By the time the project is over, 60,000 trucks will have passed by the neighbors on the haul route. Those trucks are concentrated during the summer and fall season, which already sees increased traffic. At peak haul, we've had about 300 loads in a day, and the repository operates 12 hours a day, with at least one dozer, a roller, and a large generator to run the decontamination station. That's a lot of traffic and noise that our neighbors have to contend with.

“None of us live in Montana because we enjoy traffic or machine noise, so I deeply empathize with these folks. Their patience with our operation has been amazing.”

As for the biggest challenges on the project, “From a strictly construction perspective, the safety issues associated with removing an impoundment of structurally unstable, saturated tailings was a huge concern. Sequencing and timing the work so that all water infrastructure was tied back in before winter set in has been a challenge, as well.”

Looking ahead, one of the most crucial undertakings will be matching appropriate restoration with the naturally mineralized areas.

“Since many items on a 'wish list' for a fisheries restoration project are in conflict with what needs to occur in a mineralized area to keep the system from being overwhelmed by the same metals we are cleaning up, the agencies will have to come to agreement on the plan forward.”

“To date we have cleaned up the two tributaries where the majority of the mining and tailings disposal occurred, removing over 100,000 cubic yards in the Mike Horse drainage where the mine and mill were located, and nearly 600,000 cubic yards in the Beartrap drainage where the tailings impoundment was located. When the tailings impoundment failed in 1975, it sent tailings down the valley from the confluence of these tributaries. Removing those tailings and reconnecting the fishery within the headwaters of the Blackfoot River is the next step.

“Design investigations indicate approximately 300,000 cubic yards of material will need to be removed downriver from the impoundment failure. There are native cutthroat trout in two other tributaries of the river that have been cut off from the main stem by these contaminants. Once cleanup has progressed past these tributaries, we expect to see cutthroat begin to return to normal migratory patterns for the first time in 80 years.”

According to Nick Miller, vice president of general contractor Missouri River Contractors, dewatering and underground features were among the challenges workers have faced during the cleanup. He credits a seasoned team for getting through the rough spots.

“We are fortunate to have experienced field superintendents and operators to work through issues as they arise. It's refreshing to work with engineers and agency folks who are all pulling in the same direction.”

He added that the project has had a far reaching impact.

“I'm a 5th generation Montanan, and my family has always been involved in the natural resource industry in southwest Montana. The industry has provided for my family for generations, and it's rewarding to come full circle with the reclamation projects. Missouri River Contractors is able to provide good construction jobs, and the transformation of the landscape by our crew, the engineers and the DEQ is truly remarkable.”

Haaland said comments from those who've toured the site have been extremely positive.

“They tend to be impressed with the scale of the project, the agencies and contractor's openness about the work, and the end results. We see some of the visitors year after year as they follow the progress. My hope is that this project, which we do for the people of Montana, becomes part of their history and they tell their families about the amazing results for generations to come.”

She added, “I love knowing that every day I go to the field I am working with people who take pride in the quality of work they provide, want to do the best job possible for the people of Montana, are committed to the project and are looking after the safety of each other and the public.”