June 7, 2016 was a moment steeped in history for the Saarland. 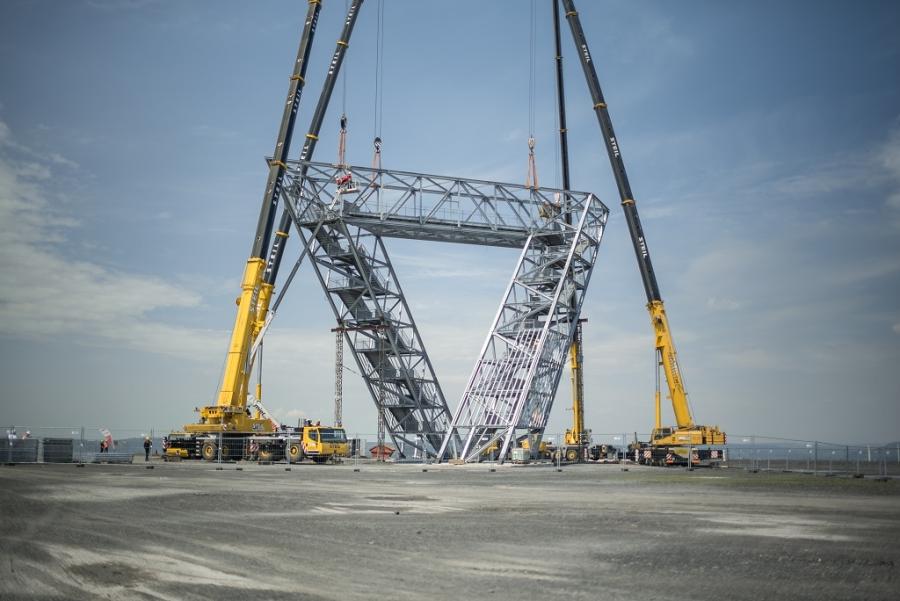 On June 7, 2016, a Terex AC 200 crane and a AC 350 crane owned by Steil lifted the 35-meter-long, 60-tonne observation deck for the Saarpolygon together with two other cranes.

It was a moment steeped in history for the Saarland in Germany: On June 7, 2016, a Terex AC 200 crane and a AC 350 crane owned by Steil lifted the 35-meter-long, 60-tonne observation deck for the Saarpolygon together with two other cranes. With accuracy, the machines placed the steel colossus between the two diagonal elements of the large walk-in monument, which is located on top of the Duhamel spoil pile in Ensdorf. Once they were done, the impressive landmark, which can be seen from miles away, had its intended appearance and could start fulfilling its function as an emblem for the entire region.

“The Polygon is a symbol meant to serve as a testimonial to the 250 years of coal mining that in many ways defined the Saar Region. The steel structure, which has a height of about 30 meters, represents the history of mining, coal, and steel in the area,” explains Frank Nicklas, who is part of Steil Kranarbeiten's field team. He then adds: “We at Steil are tremendously proud of the fact that we got to play a part in erecting this new monument for the Saarland, not least because we have a branch office in the region. It's not something we get to do every day.”

Going up the spoil pile to get to the work site was not something that cranes get to do every day either, as the steep climb to the top took them through narrow winding roads and forced them to press ahead slowly. Despite this, however, the Steil team was able to get all four cranes to the top of the spoil pile on time and, once there, position them for the lift. Fortunately, the weather proved to be cooperative – if it had rained heavily and the ground had gotten wet, it would have been impossible to carry out the project.

Since the weather conditions proved to be perfect, however, the cranes were able to pick up the steel bridge, which was made by Düren-based steel fabrication company Queck and had been pre-assembled the week before, and bring it to the required height of 30 meters with perfect coordination. “Communication is crucial when it comes to getting this kind of lift right. That's why all the signal people and crane operators involved were constantly in touch on the radio,” reports Frank Nicklas. This was an absolute necessity, as placing the walk-in bridge between the two diagonal steel elements required high precision – a centimeter or two off, and the assemblers working for Leipzig-based assembly company IMO would have been unable to install the bolted joints required between the individual structure elements. Either way, it was a riveting experience for the people who looked on as the work was performed: “I was totally impressed when I saw the bridge hanging from the four cranes. In fact, I asked myself how that was even possible when I saw it. Also, I was fascinated with the ease and precision with which Steil's employees lifted the bridge up into the air,” recounts Volker Hagelstein, member of the Board of Management at BergBauErbeSaar e.V. and project manager.

At any rate, the people who started the BergbauErbeSaar booster association project are sure of one thing: The enormous walk-in monument that is the Saarpolygon will not just be a landmark that honors the region's miners and population, but also a tourist attraction for the municipality of Ensdorf, the administrative district of Saarlouis, and the entire Saarland – and Steil has made an enormous contribution to this with its Terex cranes.