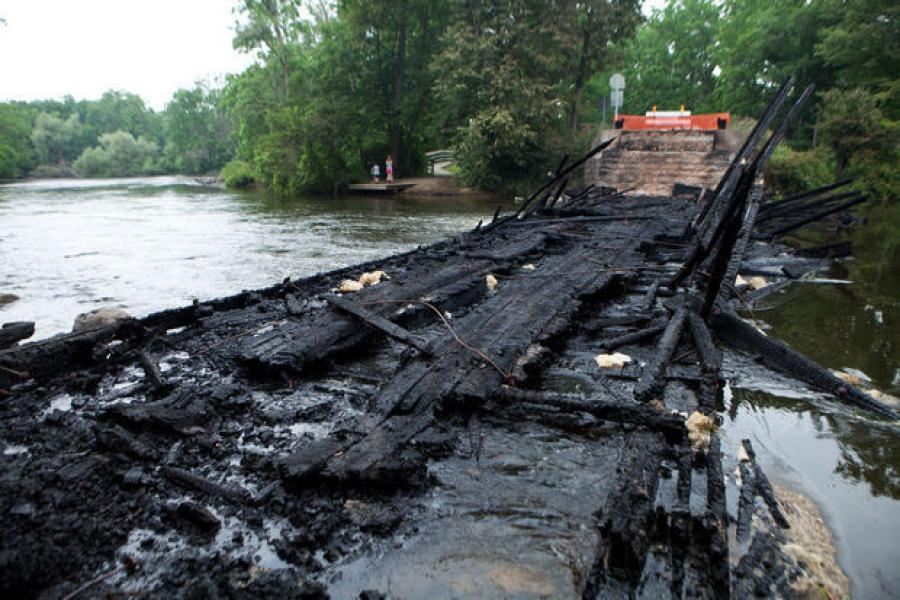 Whites Bridge after the fire. http://url.ie/11okd

The rebuilding of a historic bridge that burned down in Ionia County's Keene Township will cost more money than anticipated.

As Byle and other project volunteers began consulting with wood experts and suppliers, they concluded that the project cost was vastly underestimated. The bids were never opened, but some contractors had shared project estimates that were almost double what the group had collected.

Byle said a decreasing number of contractors and smaller crews at existing companies also have driven up project bids.

“There are fewer bridge contractors left in Michigan after the lost decade,' said Byle, referring to the years before and during the Great Recession when Michigan's population decreased and its economy was struggling.

“Whether it's a road, paving or enhancement project, the prices have escalated over the last two years,' Byle said. “It's a very interesting bidding market right now.'

Byle said if all goes well construction, would begin in 2018 at the earliest.

Whites Bridge was located about 15 miles east of Grand Rapids and more than 140 years old. It burned on July 7, 2013, after being doused with gasoline. There have been no arrests in the case. –AP